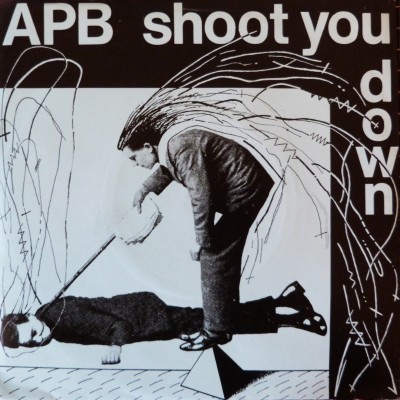 APB – I’d Like To Shoot You Down
APB were from Ellon, north of Aberdeen and their first single was a fairly standard punk affair. But shortly thereafter it seems they were beamed up to George Clinton’s mothership for some reprogramming. Because on ‘Shoot You Down’, recorded just a few months later, their punk guitars are now welded to massive funk drums and bass, while Iain Slater’s vocal is a sort of half rap intoning you to get down and leave his funk alone (in an Aberdonian drawl). Somehow this track became a big hit in the hippest New York night clubs and radio stations. APB became a popular live act on the US east coast, even supporting James Brown and The Clash. Also worth noting that, like a lot of other great records from this era, ‘Shoot You Down’ was recorded by producer Tony Pilley in his legendary Barclay Towers recording studio/flat at the corner of Bruntsfield Links in Edinburgh.

Thin Yoghurts – Girl On The Bus
In the wake of punk a huge number of records were released on DIY record labels only to sink without trace, but there are some brilliantly odd gems among this rubble. From Carlisle, Thin Yoghurts’ only single is a strangely hypnotic two and a half minutes- caveman drums, mundane lyrics, chiming guitars and basic production (with plenty of echo) manage to hint at a primitive psychedelia. Suffice to say these small town weirdos didn’t get the girl, or even speak to her: I wonder if, I wonder if she cares about us?

Scars – Horrorshow
Edinburgh’s FAST record label was one of the earliest and most perfectly formed of the post punk independents. They released trail- blazing début singles from The Human League, Gang of 4 and The Dead Kennedys amongst others, but for me Scars’ were the most inspirational. Hearing for the first time (even if it was 15 years after the fact!) fantastic, vicious, forward thinking music from my home town was a revelation: Paul Research’s razor sharp guitar, that fat bass line and Rab King living every word of his menacing clockwork orange nadsat.

Bill Nelson – Do You Dream In Colour?
Massively prodigious, Bill Nelson had been putting out records since 1971 andlike other uncategorisable musicians, the space opened up by the punk and new wave movements gave him a new lease of life. While seemingly just as happy to release ambient instrumental albums, ‘Do You Dream In Colour’ is his perfect (alternative) pop song. Big Bowiesque, new wave music with an electrosheen and enough swing and weirdness to keep you wanting to hear it again and again.

Grauzone – ‪Eisbär‬
Cold, electronic, punky and great to dance to, ‪Eisbär‬ still sounds as modern as the day it was released. Although Grauzone were from Switzerland, Eisbar was an unlikely hit in Germany and helped inspire the nascent Neue Deutsche Welle movement. And it’s about polar bears.

Malaria! –Your Turn To Run
The most accessible track by the all female experimental punk/electronic band Malaria! is still super odd. A lolloping beat pushed along by a pulsing synth and crisp hand claps, is topped by alternatively insistent then muttered vocal sung/spoken in German and English. I’m not sure what it’s all about but it brings to mind cold war paranoia, Berlin squats and winter nights at danceteria.

Gun Club – Sex Beat
If The Cramps added a punk edge to their update of trashy rock’n’roll, then The Gun Club applied the same logic to blues and Americana with similarly thrilling results. ‘Sex Beat’ is the perfect distillation of Jeffrey Lee Pierce’s booze soaked, shamanistic voodoo musical vision (with a danceable beat).

Delta 5 – Mind Your Own Business
Political records with shouty monotone vocals and atonal guitars shouldn’t sound this great. But from the opening notes of the instantly recognisable bass intro this record is as catchy as hell and as funky as James Brown. Delta 5 were aligned with fellow Leeds band Gang of Four and with the likes of Au Pairs also putting out records in the early ‘80s, socialist and feminist critiques briefly invaded the dancefloor.

Wazmo Nariz – Tele-tele-phone
A dash of Devo, a hint of bar band boogie and lot of moronic new wave fun. Wazmo’s gimmick was that he wore two ties with his second hand car dealer suit and the cover of the record makes me smile the same way the music does. In the early 1980s a song like this could even be a hit and Stiff (who had an ear for such things) must have thought so when they licensed it from a tiny Chicago label for UK release, but it wasn’t to be. There’s a whole Wazmo Nariz album out there, but I’m scared to hear it since it can’t be as perfect as Tele-tele-phone.

Fire Engines – Candyskin/Meat Whiplash
My favourite single by the greatest ever Scottish band. ‘Candyskin’ was their swansong and one attempt at a pop song. It totally works despite sounding like a drunk serenading you in bagpipe factory. ‘Meat Whiplash’ is the über Fire Engines song, like all the others meshed together and even more so. Everything is in it’s correctly wrong place: the relentless wobbly beat, the startling Beefheart guitars and Davy Henderson yelping and hectoring over the top. I like the labels on food tins – they’re so important to me!

Chris Fast DJs at post punk club Betamax, at Studio 24, Edinburgh, on the last Saturday of every month (mostly).