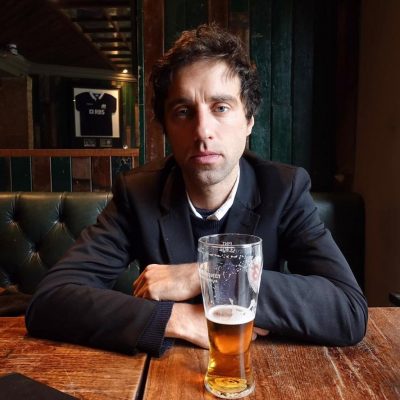 A BP Prize-shortlisted portrait painter by trade, the ramshackle indie skronk of James Metcalfe’s outfit The Pineapple Chunks was a cult favourite on Edinburgh’s underground live scene throughout the late zeros and early teens. Their 2011 album A Dog Walked In is an essential document of a defiantly avant-garde noise scene that included other Edinburgh bands such as The Leg and Zed Penguin. Originally from Kent, Metcalfe returned to London for lockdown and put together a new trio featuring his classically trained brother Alex on keys, guitar and percussion with ex-Warm Jet Ed Grimshaw on tubs to record a new album. The pared down lineup is reflected in new tag The Chunks and the sessions delivered a more polished, poised set. Produced by Brian O’Shaughnessy, Warm Universe is bristling with power pop anthems and bittersweet teen symphonies from a songbook that includes Buzzcocks, Pavement, Big Star, The Yachts and The Monochrome Set. Lead single Loudness Wars showcases Metcalfe’s evolved song writing talent and sharply observed lyrics; the 45 is a tautly melodic love letter to anyone who ever had a broken heart but decided they kind of liked it.

The Edison Singers, My Grandfather’s Clock –

Everything stems from this – the first piece of music I can remember digging. Not this recording although it’s a good one. They played it in primary school assembly, and most of the others were hymns and profoundly depressing. You always had the ones you looked forward to – ‘Fuck yeah, it’s Lord Of The Dance!’ I hated school and would almost interpret each day’s selection as an omen. It’s all about the cadence, it stuck and I still use it all the time. I’m still trying to escape from the escapism of major tonic keys. It’s probably indicates a dysfunctional desire to regress to the innocence of childhood. As a grown up, I discovered wonk and that’s kind of my ‘style’ for now: 70/30 major/wonk.

I’m like the Jamie Oliver of indie – I like big, simple, honest flavours. And I have an unconventional sounding voice. This is just school disco-tastic, one of the few highlights of the school calendar. I might just as easily have selected ‘Feed The World’ if it wasn’t so terrible – SAW is not a dirty abbreviation in my book. There’s a DX7 under my bed. It has the twinkly/poignant/nostalgic/happy/sad vibe that I can never find the word for. Maybe they have one in German or something. Kirsty was awesome, and of course there’s Euan, the fatigue-proof ‘Fairytale’ and the tragic backstory of her death now, which shouldn’t matter but somehow does.

Orange Juice, The Day I Went Down To Texas

This is probably my most ‘Hey what’s this, college flatmate?’ record, he just stuck it on one Saturday afternoon in our flat in Streatham, really loud, and that was it, a new era had begun. At that age music can still grab you by the guts. It’s a super consistent EP; virtually no filler, and a great cover to cap it all off. That’s important – don’t let anyone tell you otherwise. Like track order it still matters. It could’ve been Bridge or Craziest feeling (but probably not Punch Drunk). It’s visceral, it has that post punk ‘treble bass’, that Entwhistle invented, the anodyne drum sound, jangly/jagged guitar and of course Collins’ prickly personality and delivery. He kind of gives the underdogs hope.

I can’t listen to Blue anymore, I used it all up in my early twenties; it helped me through a tough time. Others include Mutations and Ogden’s Nut Gone Flake. There’s something cathartic about it, and it’s a near perfectly crafted record but also Joni was a total babe in part because she was a pioneer of alternate tunings, at least in western diatonic music. Google says she’s used 51 tunings to date. How cool is that, and this is way before Thurston. I actually assumed she’d managed to approximate that dulcimer sound at first and I’m sure she could have if she wanted to. I hate it when you’re playing in standard and all you can see are fucking barre or root chords; alternate tunings open up the writing process exponentially for some people. For others it’s a cop out maybe, and that’s fine too. But I’m in the former camp and Joni is the Godmother as far as I know.

Stephen Malkmus And The Jicks, Walk Into The Mirror

I can’t not include this. As cringey as I know my obsession with Malkmus can be it wouldn’t be right. It’s the reason I’m writing this, probably. I kind of fell out of love with music around 2003/4 which seems insane to me now, considering I couldn’t live very happily without it. I can’t explain it. I’d hit a wall with music even. But then this live bootleg dropped on Aquarium Drunkard, or Captain’s Dead maybe, one of those great noughties hipster blogs, of the Jicks playing a ton of new material which went on to become Real Emotional Trash. They’re all pretty retro really but seemed fresh somehow, and they made me believe again. Ticked my boxes. I already disliked Jeffrey Lewis and his mangling of it didn’t do him any favours. It’s a ‘proper’ traditional pop/rock song but with irony; a postmodern hippie song. It’s got it all: a just wonky enough riff, a proper chunky chorus, and a great middle eight. It best exemplifies what I love about that album and like all his best stuff, it didn’t make the cut.