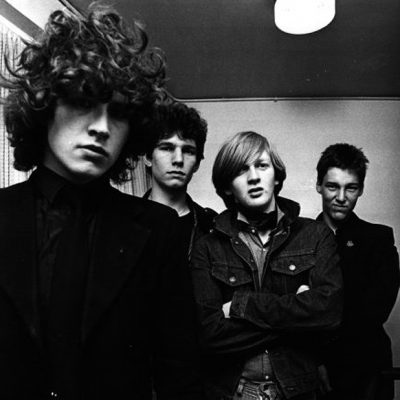 When Robert King auditioned to be vocalist for Scars, the Edinburgh band formed on the back of punk, his performance was reputedly so scary that the other auditionee watching left the room, never to be seen again. This story is one of many about Scars that pops up in Big Gold Dream – The Sound of Young Scotland 1977-1985, Grant McPhee’s meticulously researched documentary excavation of a much unsung era. As Creeping Bent record boss Douglas MacIntyre also makes clear in Big Gold Dream, it wasn’t Orange Juice’s first single, Blue Boy, that was Scotland’s equivalent of Anarchy in the UK by the Sex Pistols, as some maintain. It was actually Scars’ ferocious debut, Horrorshow / Adult/ Ery, released on Fast Product records in 1979, that sent shockwaves around a younger generation in search of something beyond a one-chord thrashabout.

Thirty-seven years on from Scars’ debut, and thirty-five after the band’s solitary album, Author! Author!, with time as an emigre in Lyon, France, King has just released a three track CD single and download on the Glasgow-based Rubber Taxi Records. Super 8 is a low-slung piece of science-fiction loungecore, which, in its’ original mix, is a psycho-drama in miniature concerning a man waiting for a train that doesn’t come.

The accompanying two mixes throw light and shade on the same situation. Former Fire Engines and Win drummer Russell Burn’s take on things does away with much of the instrumental introduction and heightens a woozy nouveau cabaret bar melodrama. The second, by Penetration bass player Robert Blamire, who also produced Author! Author!, constructs something more urgently propulsive, the song’s electronic rhythms thrust to the fore in a way that suggests an endless travelogue on the Trans-European Express.

Released in a physical edition of just 100, Super 8 is a chance to catch up on the wilfully singular musical vision of a maestro who has divided his time in recent years experimenting with his Opium Kitchen and Groucho Hand-job projects, and as an international professor of Mediterranean Languages and Culture in Lyon. Coming on the back of this, Super 8 showcases an international language forged by a true maverick.

Super 8 by Robert King is out now on Rubber Taxi Records.