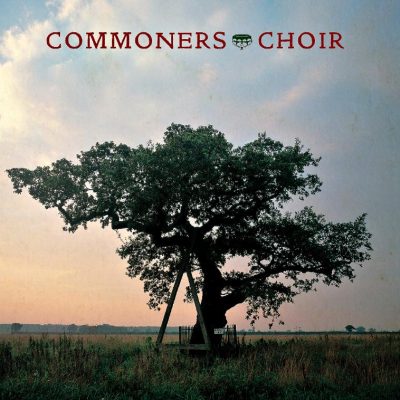 Boff Whalley was still in Chumbawamba when the idea of forming a community choir first started to take root. By this time, the Leeds-based anarcho-punk iconoclasts, formed in 1982 out of a northern English squatting scene, had subverted the pop charts with their anthemic breakout hit Tubthumping. More recently, they had scaled back operations to perform as a largely acoustic ensemble. This highlighted the band’s folk origins which had always been lurking behind the punk thrash through the vocal interplay between Whalley, Lou Watts and Jude Abbot. “Even when we were still playing as an electric band, we’d do vocal harmonies backstage before we went on,” says Whalley, “just as a reminder that you’ve got to listen to everybody, and that there’s no hierarchy.” Once Chumbawamba ended in 2012, Whalley went on to work as a writer with veteran leftist theatre company Red Ladder. He also ended up working with a scratch choir. This opened Whalley’s ears to the possibilities of a more permanent operation, and before long he’d penned a prototype of the sort of songs he had in mind and put out feelers for like minded would-be singers to join in.

“I thought, choirs are great,” says Whalley, possibly one of the most affable human beings on the planet. “People have all these expectations of choirs being nice and respectable, but I wanted to marry that to a punk ethic of politics and anger. I’ve always been fascinated by manifestos, so I wrote this manifesto of what I thought a choir could be, wrote this one song called Get Off Your Arse!, and put it on social media with a message asking: does anyone want to do something? To my surprise, all these people turned up at this first meeting, and we just decided to run with it.”

The result of this is Commoners Choir, the Leeds based vocal troupe formed in 2015, who this weekend bring a selection of brand new protest songs to Wigtown Book Festival. Much of the Choir’s repertoire is likely to be drawn from the twenty-one songs on their just released self-titled album. As well as Get Off Your Arse!, the record features such missives as The Jeremy Hunt Rhyming Song, Song Made From Placard Slogans, and one number simply called Boris Johnson, which imagines the Foreign Secretary’s head impaled on a stick. Another song, Mechanical Moveable Type, highlights the power of the printed word in a way that justifies Commoners Choir’s appearance at Wigtown following a tour of libraries in the north of England.

“The libraries thing was great,” says Whalley. “Libraries are the places where knowledge is stored, and they’re always the first places to go when there are local authority cuts. We deliberately tried to go to libraries that weren’t big cultural centres, but to places that were suffering from cuts and were maybe under threat of closure.”

Commoners Choir (no ‘the’, no apostrophe, as the group’s website points out) is the latest example of a wave of similar community based artistic activities in which participation is a vital part of the experience in a way that makes the divide between audience and artist more of a democratic, two-way exchange. Choirs are popping up everywhere, from the Parsonage covering Gram Parsons classics in Glasgow, to the Edinburgh Gay Men’s Choir and independent artspace Rhubaba’s own vocal troupe and a multitude of local choirs. As with Commoners Choir, people joining together to sing in this way is an explicitly political act.

“What’s happening,” according to Whalley, “is that – and it’s the same with walking, running, cycling, baking, knitting, having an allotment, making your own clothes – all these physical things that don’t involve looking at a screen are becoming more popular. There’s a return to doing things that are down to earth, and what a lovely thing, getting into a room with twenty or thirty other people and making a sound.

“Altogether we’re around seventy in total, although there’s usually about thirty to forty of us. On one level that can be quite unwieldy, but for singing it’s great. You can break things into four parts, and because there are so many of you, it’s easy to cover up any inconsistencies there might be. It’s like football. Martin Carthy, the folk singer, has this theory about football crowds being the last authentic folk singers in Britain. That’s not something I necessarily agree with, but I like the idea of getting people together to sing en masse.” 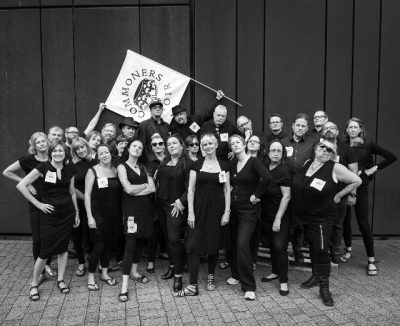 In this respect, Whalley points to Bill Drummond, who a decade ago instigated The 17, a rolling series of ad hoc groupings brought together across the world to sing Drummond’s wordless scores. Whalley also mentions Jeremy Deller, the Turner Prize winning artist whose work has frequently focused on communal civic actions. These include a re-enactment of the Battle of Orgreave, one of the pivotal moments of the 1984/85 miner’s strike, when police charges on picket lines outside a South Yorkshire coking plant led to pitched battles between the two sides and a very real sense of English civil war. Deller also initiated Acid Brass, in which the Stockport-based Fairey Brass Band played a set of Acid House club classics in a way that married two forms of communal activity.

Going back further, there was Shoulder to Shoulder, the South Wales Striking Miners Choir’s recorded collaboration with industrial oppositionists, Test Department. Around the same time, The Happy End was a twenty-two piece brass band who featured future Communards collaborator Sarah Jane Morris on vocals, and whose set focused on songs from the Brecht/Weill and Brecht/Eisler canon. Beyond such inspirations, The Happy End also performed anthems from South Africa, Latin America, Ireland and other places in conflict. Whalley and Chumbawamba themselves found a sense of solidarity with such groupings.

“At the time,” he says, “I think a lot of bands, and it’s certainly what happened with Chumbawamba, we thought we were a pop band, but then the miners’ strike happened, and you realised that it’s about class, and that something like a brass band or a choir, they’ve got a lot of power.”

This tied in with Whalley expanding his own musical horizons.

“I originally got into punk,” he says, “and then in the mid eighties that all fizzled out a little bit, so I started looking round for other things, and started listening to folk singers like Leon Rosselson and Dick Gaughan. I remember seeing Dick Gaughan, and him singing one particular song a capella, and I remember thinking that I’d seen all these punk bands thrashing about, but that in terms of getting something across, Dick Gaughan’s voice on its own was just as powerful.”

Whalley may have initiated Commoners Choir, but he is keen to stress the group’s democracy, and balks at any notion of him being a choir-master, with all the presumed authority such a role might bring with it.

“When I first started going into choirs I got to know a few proper choir masters,” he says, “and it’s a real skill. I just wave my arms about and hope for the best. But people come up with ideas for songs all the time. Someone came up with the idea of us being a singing newspaper. I love that, because, as you get older you can lose some of your anger, but today you can’t open a newspaper without getting angry, so, as an artist, why not use that anger to turn it into a song? One of the good things to come out of the whole Trump, May and Brexit thing is that it seems to have woken a lot of people up, especially young people.”

One thing that has come out of Commoners Choir is a desire to create a new canon of protest songs to be sung on demonstrations.

“We’ve just started a thing once a month where we try to do one-minute protest songs, which haven’t got complex harmonies, but which can be sung on demos. That came from when Trump tried his anti-immigration thing, and some people from the choir went down to the demo. We were singing some of the songs we sing, and people were liking it and wanted to join in. It seems that there’s a standard chant at protests and demos, where people shout the same things through a megaphone, and it’s been like that for years.

“There’s a lovely article that Leon Rosselson wrote, where he said that in South America and loads of other places across the world, there’s this fantastic body of songs that people sing on demos, but we don’t have that here. As Commoners Choir, we take that as a challenge. The physical thing of having thirty or forty people singing without amplification, where everybody’s equal, and everybody’s dependent on each other – it’s really inspiring.”