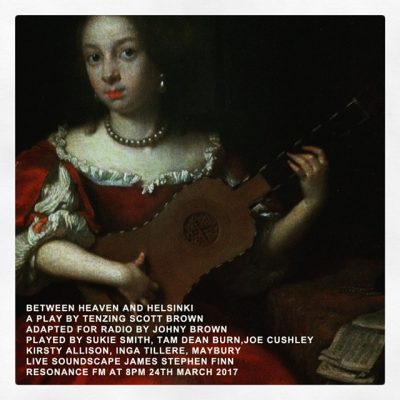 Bill Drummond is full of surprises. Just ask Johny Brown, poet, playwright and for three decades the soothsaying frontman of Band of Holy Joy, whose state-of-the-nation musical addresses have become increasingly urgent dispatches from austerity Britain. When Drummond handed Brown a set of plays that he’d written and asked him if he thought he might be able to do anything with them, it was a gesture that came out of the blue. The result is The Cherry Blossom Quartet, a five-night series of radio broadcasts of the plays, adapted by Brown and performed live with accompanying soundscapes on community-based online art radio station, Resonance FM. With a cast that features the likes of Joe Cushley and Sukie Smith, Drummond will be given voice by actor, activist and long term collaborator of Brown’s, Tam Dean Burn.

“Bill’s never written a play before,” says Brown, “but he started going to watch all these plays at the Arcola Theatre in London close to where he lives in Stoke Newington. He started going every night, and I think he saw some really bad ones, and as he’s getting older I think he wants to do something in theatre.”

After more than forty years of making a spectacle of himself, such a move into play-writing was probably inevitable. Pretty much everything Drummond has done, after all, has had a sense of theatre about it, from his travails through the music business with Zoo Records and the KLF to his much mythologised activities in the art world as one half of the K Foundation.

More recent artistic actions includes The 17, a rolling choir made up of volunteers drafted in to follow Drummond’s word-based scores; and The 25 Paintings World Tour, which began in 2014 under Spaghetti Junction, where Drummond also plans to end it in 2025. All of Drummond’s past adventures have been documented in wilfully individualistic essays, many of which are contained in his books, 45 and The 17.

Future events include an appearance at Neu! Reekie!, the Edinburgh-based multi-arts mash-up in April, and will take part in Where Are We Now?, Neu! Reekie!’s weekend festival that forms part of Hull’s year as UK City of Culture in June. Here, Drummond will set himself up as a shoeshine boy, cleaning people’s shoes while asking them to share their darkest secrets.

There is also 2023 – A Trilogy, a still-to-be defined series of events instigated by the Justified Ancients of Mu Mu, and set to take place in some form in Liverpool between August 23rd and 27th this year. This has been leaked through a series of posters that say everything and nothing about what may or may not happen. In terms of dramatic promise, it’s a tantalising cliffhanger loaded with possibilities.

The Cherry Blossom Quartet is something else again. The four plays – Bill Drummond is Dead, To the Shores of Lake Placid, Repossessed and Between Heaven and Helsinki – are broken up by a mid-week interlude, Theatre and Me.

“All of the plays are about Bill’s life,” says Brown. “They’re an extension of his various artworks, and talk about his work and personal life as well as what’s going on in the world just now, which Bill is really passionate about. He thought they were impossible to put on, but I thought I’d like to have a crack at them.”

Given that the first play, Bill Drummond is Dead, is a dialogue-free affair which features Drummond laid out on a mortuary slab wearing a Liverpool Football Club shirt, this sounds like quite a feat. “We’ve turned the stage directions into a poem,” says Brown. “It’s about the price of art and the price of life and death.”

To the Shores of Lake Placid winds back to Drummond’s Liverpool days, from playing in Big in Japan with the likes of Ian Broudie and Holly Johnson to releasing the debut records by Echo and the Bunnymen and the Teardrop Explodes, who Drummond also co-managed.

“It’s all about Zoo, and has a sixty-two year old Bill arguing with a twenty-eight year old Bill about the value of a 7” single as an art-form. Bill talks a lot about how Zoo was more than just a record label, and how it was a play, and the stage set was the office.”

This is a neat pre-cursor to Theatre and Me, in which Drummond talks about his early days working with theatrical maverick Ken Campbell and his Science Fiction Theatre of Liverpool, based in the upstairs room of a cafe in Matthew Street, then Liverpool’s underground artistic hub.

Brown describes the next play, Repossessed, as “a romp,” involving Drummond’s ex wife and three film-makers who he attempts to pitch ideas to, but who only want to talk about the KLF. One suspects this is an experience Drummond has had to face many times. 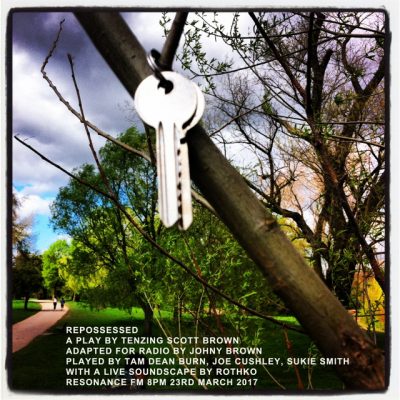 The final play, Between Heaven and Helsinki, is the one Brown calls “the killer,” and is based on the rise and fall of Kristina Bruuk, the imaginary singer invented by Drummond and Zodiac Mindwarp and the Love Reaction’s Mark Manning for their book, Bad Wisdom. In their epic voyage to the top of the world, the pair created a record label, Kalevala, and released six singles by make-believe bands, with Bruuk – described as ‘the Nico of the north-lands’ – contributing guest vocals to a record by fictional all-female Finnish quartet, Dracula’s Daughter. The play that has come out of all this is something of a rock and roll tragedy.

“The character took on a life of her own,” explains Brown, “and in the play she tells her life story of how she goes from Helsinki to London, before ending up back in Helsinki again.”

Anyone familiar with Drummond’s written work will recognise the roots of some of the material, as well as the titles. Bill Drummond is Dead was a song recorded by Teardrops’ singer Julian Cope in response to Drummond’s song, Julian Cope is Dead, while Repossessed is the title of Cope’s second volume of his own autobiographical musings. To the Shores of Lake Placid was the title of a 1982 compilation album of rare and previously unreleased material put out by Zoo.

In this respect, The Cherry Blossom Quartet can arguably be seen as Drummond’s latest piece of auto-biographical myth-making which, despite his seeming loathing of nostalgia, is taking an increasingly reflective tone. This can be seen especially in his recent writings, including an essay in response to the death of Dead or Alive singer and Liverpool post-punk peer Pete Burns. What started off as a reluctant elegy expanded into a glorious pop cultural epic which not only validated Drummond’s heroic anti-career over the last forty years as well as being an attempt to make some kind of sense of it all. So it goes too, it seems, with his plays.

“Bill’s still full of life,” says Brown, “and he bounces around Stoke Newington like he’s on fire, but there’s a definite awareness of his own mortality that comes through in all the plays.”

The Cherry Blossom Quartet is penned under the name Tenzing Scott Brown, the Boy’s Own style nom de plume sometimes used by Drummond. These have included a spoken-word vocal to a track by Skyray, the ambient project of Wild Swans mainstay and original Teardrop Explodes keyboardist Paul Simpson. A Tenzing Scott Brown Twitter account features a profile picture of Drummond sporting shades and a brightly bobbed orange wig. Despite a declaration in the account’s sole tweet that there would be one tweet a day for 365 days inspired by feminist literature, the account has remained apparently untouched since 2011.

Each play in The Cherry Blossom Quartet will feature original soundscapes by Rothko, Ghost Mind, Farmer Glitch, Psychological Strategy Boards and James Stephen Finn. Rather than mere soundtracks, the music will be integral components of each play. This is in keeping with Brown’s original work outwith Band of Holy Joy, both on radio and onstage.

On Resonance FM, Brown and Burn collaborated on a series of plays, including a dog’s eye view of the late Associates singer Billy Mackenzie as related by one of his beloved pet whippets. Since then, Brown and fellow Band of Holy Joy member Inga Tillere have initiated Radio Joy, an impressionistic pirate radio compendium of words and music later collected in the book, Field Notes. More recently, Brown has been the driving force behind Bad Punk, a similarly styled weekly late night programme that will also produce and present The Cherry Blossom Quartet.

In theatre, Brown brought his play, William Burroughs Caught in Possession of the Rime of the Ancient Mariner, to the Citizens’ Theatre in Glasgow. This epic fantasia saw Burn play the iconic author of The Naked Lunch as the captain of a ship whose crew included New York Dolls guitarist Johnny Thunders, experimental novelist Kathy Acker and artist Jean-Michel Basquiat. It was a previous Brown/Burn collaboration, however, which first sired the creative relationship with Drummond.

“That was a play called Cruel Britannia,” says Brown. “It was a Greek myth transplanted to the Blair years and was an absolute romp. We did it at the Scala in London, and we approached Bill with a view to him designing the stage set. He met us, and asked us what made us think he would do it. He said he wanted nothing to do with the play and nothing to do with theatre. Then he read the script, loved it and ended up doing it. It was 1999, and I think the play touched on a lot of things in Bill’s life at that time, and I don’t think he ever forgot it. When he started going to see plays at the Arcola which he thought were shite but were being hailed as great pieces of theatre, I think he thought of Cruel Britannia, and wondered why that never had the same sort of acclaim. ”

Drummond’s design was praised extensively in theatre critic Michael Coveney’s biography of Campbell, The Great Caper, and if he had carried on in a more relatively orthodox career path, Drummond might have had a glittering future as a stage designer. While Illuminatus! went on to open the National Theatre’s Cottesloe space on London’s South Bank, as Drummond has himself documented, he left the rehearsal room to get some Araldite, and never went back.

Given The Cherry Blossom Quartet’s tenure on Resonance FM, it’s possibly no coincidence that several years before his death Campbell and actor Christopher Fairbank read and performed the novel of Illuminatus in full in a series of marathon live broadcasts on the station. It’s this fearless spirit that both Brown and Drummond have brought into The Cherry Blossom Quartet.

“There’s no safety net,” says Brown. “We’re doing it live, and we’re not even rehearsing it beforehand. Inga’s documenting it, and it’ll go in the Resonance archive, and once it’s done it’s done.”

If and when The Cherry Blossom Quartet is staged in the theatre, given the track record of all involved, it’s likely to be done in a typically punk DIY manner. Brown has ambitions to see the plays staged at the Star and Shadow venue in Newcastle.

“It’s the logical next step,” he says. “For me and Tam, these plays are exactly the sort of work we want to do. To be given scripts like this by Bill, it’s a godsend.”

The Cherry Blossom Quartet is performed live on Resonance FM from March 20th-24th, with a different play each night from 8pm.