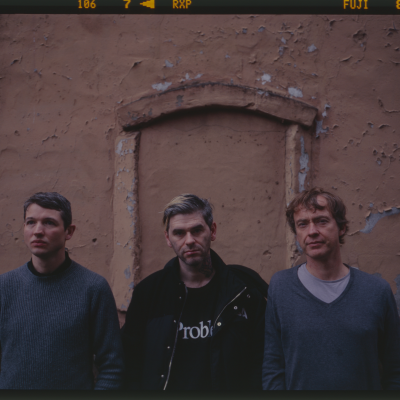 The spirit of nightclubs past, present and future hangs joyously over these two releases by different permutations of a Glasgow underground supergroup steeped in the city’s DIY art/music interface. Both are limited edition 12” vinyl releases packaged in sleeves resembling old-school DJ-friendly platters as flash as they are cheesy. Both too are as myth-makingly conceptual as you can get. The first finds electronicist and Turner Prize-nominated artist Luke Fowler, Franz Ferdinand drummer Paul Thomson and vocalist/composer Richard Youngs joining forces for six slices of insular techno. These pieces are seemingly inspired by allegedly long-lost Italian synthesiser factory worker turned composer/performer, Emmanuel Maggi. The second finds the trio augmenting the line-up with bassist Michael Francis Duch as they morph into AMOR to produce a more organic stew of post-punk avant-disco that could have been excavated from circa 1979 Ladbroke Grove.

Key to both records is Richard Youngs’ mantra-like vocal, which for anyone well versed with any of his solo a capella performances sounds rooted more in sixteenth century English madrigals than 1980s proto House. Given the reliance of both on repetition, it makes much more sense than you might initially expect.

As E. Bias, the trio work with a wilfully-limited palette. The opening No Way Back sets a tone of low-end synth-squelch and electronic claps pulsing Youngs’ keening voice. Each repeated verse of haiku-like lyrics is punctuated by a Casio organ before a percussive wig-out takes it to climax.

On Emergency, Youngs seems to channel Metal Box era John Lydon while an urgent piano chord sounds the alarm. Landfill finds rhythms dropping in from all sides in a shadowy set-piece, which, like Share adds swathes of percussive patterns over Youngs’ melancholy vocal. Ride ups the BPM slightly by throwing Steve Reich-like shapes into the mix.

Finally, Pleasure embraces the contradictions of its title, with Youngs sounding almost mournful over a piano that wouldn’t be out of place on a Moby record, before a sepulchral keyboard brings the song to a delicious end. If there’s a bona fide club hit on the record, this is it.

As AMOR, the addition of Duch is crucial to a looser sound that spreads out over two thirteen-minute sides. Paradise begins with a thump, a shuffle and Duch’s double bass signalling some potential spiritual jazz moves before a piano chord pounds in like it was salvaged from The Red Crayola’s feminist funk anthem, Born in Flames. As with the E.Bias EP, repetition counts for everything. Here, however, it’s as if the doors have been kicked open and everybody’s taken a deep breath before leaping into an infinitely-brighter world.

Heard immediately after the E.Bias record, Paradise sees Youngs on a mission as he leads the rest of the band on a march to somewhere beyond pleasure, and beyond Pleasure. Musically, Paradise makes for a melting pot of raw rhythm with added synth squiggles. Vocally, Youngs sounds evangelical and possessed with the clarion-calling vigour of Camberwell Now period Charles Hayward.

In Love An Arc is even more eclectic, as it opens with Jane Sayers’ scraped violin, again leaning towards free improv territory before slowly getting overtaken by a bass and piano-led groove. When Youngs’ vocal comes in, it’s with a pure and instinctive force that drives the rest of the band in a way that makes you yearn to hear it played live.

On one level, both records are meticulously-observed constructions that come from the loving perspective of fan-boys high on Liquid Liquid and Arthur Russell. On another, they transcend their influences to reinvigorate them with a retro-future state of nowness that lives in its own very special moment.

As In Love An Arc careers home into a percussive eruption before pitter-pattering into the distance, it’s clear E.Bias and AMOR are two sides of the same dancefloor. Where one internalises the experience, the other is a thing of unfettered joy. Both should be embraced.