David Hare believes Netflix and Amazon have ushered in another golden age for screen writers. By Victor Eaves 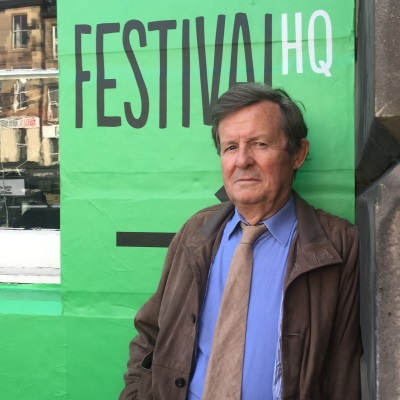 David Hare was interviewed by Johnny Murray as a part of the Edinburgh International Film Festival’s ‘In Person’ special events. It was a positive conversation and could not cover Hare’s own career without inadvertently offering a recent history of UK television and film drama. Hare’s career began in earnest with four BBC plays between 1973 and 1980, although he had been writing since the 1960s. That would mean that in a matter of years, Hare will have produced film, television and stage work spanning seven decades! He however remains youthful, funny and intelligent in conversation, and I was particularly taken with his notion that writers and film production companies in general perhaps exist today in what he called ‘a utopia’.

This is the utopia created not just by the online providers Netflix and Amazon but by certain US channels also. For the promise of Netflix, by the way, please also see that other EIFF winner, Calibre, by David Palmer, Wellington Films and Creative Scotland ― an excellent film and a fit enough winner of something. Best British Feature Film is an impressive award to have actually won, but it’s a prize that would make a casual observer ask about the quality of all the films it must have ‘beaten’ to get there.

In conversation at the festival, David Hare talked first about why as a stage writer, he was also interested in television. Throughout he remained consistent in his view that the television and the stage, and again film, were radically different mediums for the writer.

the industry needs what they call ‘product’ and people who they can trust to make product, more than we need their money

Licking Hitler, Hare’s 1978 BBC Play For Today production was one example of such, and on its first screening, it had a viewership of over 8 million people in the UK.  For a one-off film that’s staggering, and David Hare acknowledged this.

“It’s an unimaginably large audience and I noticed that it made a lot of writers write better―or rather, there was a convention in the theatre that you might be guarded, witty, cynical, and not quite showing what you felt―the convention was that the theatre was a ‘sophisticated medium’ and so when you wrote for it, you were barbed.”

The difference appeared in Hare’s view to be one of writerly ethics, it seemed, with a certain class consciousness thrown in. Hare went on to say that he saw stage plays by Dennis Potter and David Mercer which he found more ‘defensive’, as if those writers were saying to themselves: ‘I’m playing to the posh middles class audience, so I must make posh jokes,’

“Yet,” he continued “if you see those same writers’ work on television, they’re not frightened to put their heart on their sleeves and make the effort to be sincere.”

The period which followed the BBC Play For Today era, and which saw the emergence of Channel 4, was then discussed. In this period, feature length works were commissioned intended both for release and also broadcast. For David Hare personally, this meant films such as Wetherby (1985), Paris By Night (1988) and Strapless (1989) ― it was an era the writer described as a “revolutionary coming together of television and cinema in a British context.” 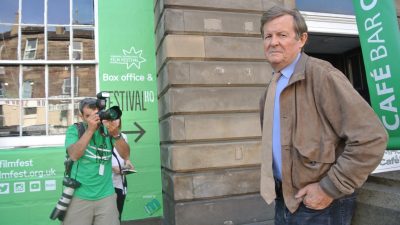 “Utopia for filmmakers is very rare,” he said, “and there have only really been a couple of utopias. When they happen you know they are going to be very brief, but there is a utopia at the moment with Netflix and Amazon, because they need you more than you need them. The balance for once in the industry, is that the industry needs what they call ‘product’ and people who they can trust to make product, more than we need their money.”

He has to be correct, and the success of Calibre proves it, when you see Netflix and Creative Scotland as partners all of a sudden, it can’t be a bad thing ― can it?

“If there is anything good that you have to do,” said Hare, “at the moment the chances are that you might be able to find somebody at Netflix or Amazon, or any of the many dedicated channels in the United States, that will be able to finance it. The only time I have known that before, was in the 1980s when Jeremy Isaacs and David Rose who had come out of television decided that they wanted Channel 4 to make their the mark with a Channel 4 weekly film. They would allow that film to be released first at the cinema and then it would be shown on television. So we all formed film companies, because we were actually being asked to make independent films. And we were promised that if they were half way good, they would be financed. And everybody would get a million pounds. You got a million pounds for each one, and you had to make it with that money and anything else that you might be able to find to help you.”

Utopia for writers may be a marvellous thing, but David Hare did warn us that they don’t last. The unintended consequence of the 1980s utopia he sketched, was that British television lost Ken Loach, Mike Leigh, Stephen Frears and others, because they all moved out of television and into filmmaking.

“The best of the people we lost they came out of television,” he said, “and because they came out of television they thought the writing was the most important thing. The reason Stephen Frears, a filmmaker who could make anything he wants, made that A Very English Scandal trilogy was because for him the writing is the most important thing and the writing by Russell Davies in it is just brilliant. Primarily what television represents, both here and in the United States, is the primacy of the writing. What film represents is the primacy of the director.”

Many thanks to Johnny Murray and the Edinburgh International Film Festival for the opportunity to hear Sir David Hare in conversation.