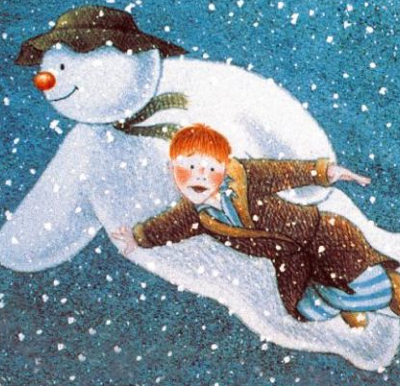 This charming animation has remained a perennial favourite in popular culture because of the sheer beauty of its animation. Raymond Briggs’ sketchy, storybook style creates a sense of wonder as the titular snowman carries his creator through the air, soaring over beautiful, wintry sights. The song that accompanies it has become so iconic that whether it’s good or not hardly seems to matter. The highlight of the film is a dance party of snow-people, taking place deep in the woods, an infectiously joyful celebration that makes the concluding pile of melted snow even more heartbreaking. Admittedly, the main reason that this makes the list is sheer nostalgia, the perfect accompaniment to family afternoons round an open fire in the depths of winter.

This five minute short by Wladyslaw Starewicz, a Russian animator, is a whimsical tale of a Father Christmas model climbing down from his tree to host a party for the creatures of the woods. What makes this short remarkable, however, is that it was made in 1913 using stop-motion puppets in a way that would go on to influence the works of Jiri Trnka, Laika and the people behind The Nightmare Before Christmas. For animation fans, this is a fascinating little curio, an enjoyable and sweet short that demonstrates the potential of stop motion as a medium; objects appear and disappear at will, insects roll around the forest and water moves in splashes of wool.

At heart, this  human compassionate film celebrates the qualities of kindness and generosity which Christmas is all about.
I wrote recently about discovering the work of Satoshi Kon, and his story of three homeless people trying to look after a baby does everything a Christmas film should do. At its heart, it is a human, compassionate film that treats every character with respect and celebrates the qualities of kindness and generosity – what Christmas is all about. More than that, however, the story acknowledges that Christmas is not rosy and warm for everyone and that there are still people who experience hardship, grief and sadness at this time of year; amazingly it manages to do this without being a total downer. To find a Christmas film this nuanced is a rare thing indeed, made even more special by the stunning animation of a master at his peak.

This is another animation that made it onto the list thanks to its insights into the history of animation as a medium. This was Disney’s second Christmas short after Mickey’s Orphans, and released in 1932, only four years after the pioneering Steamboat Willie. The animators are still clearly relishing the opportunities afforded by synchronised sound; Mickey plays the cello to collect money, while every hit and pratfall is accompanied by a comical sound effect. You can see the principles that characterised the studio’s animation techniques clearly at play here, with exaggerated physics and a strong streak of sentimentality. A colourised version was made for a shorts compilation many decades later, but the original has all the charm.

Aardman are masters of the throwaway joke and the almost unnoticeable sight gag; their CG collaboration with Sony is chock full of them, all Christmas-themed in some way. The story of the most incompetent member of the Christmas family, Arthur, taking the reigns of the sleigh with his wizened grandfather, is ripe with comic potential, achieving a ludicrously high jokes-per-minute ratio. Although there’s the genre-mandated slide into fuzziness towards the end of the film, where the whole family of Santas realise the value of Christmas, there’s enough visual dazzle and sharp writing to make this one of the finest festive animated films of recent years.