As Bojack Horseman heads for the knackers’ yard, Stephanie Provan salutes the show’s defiant demands on its audience 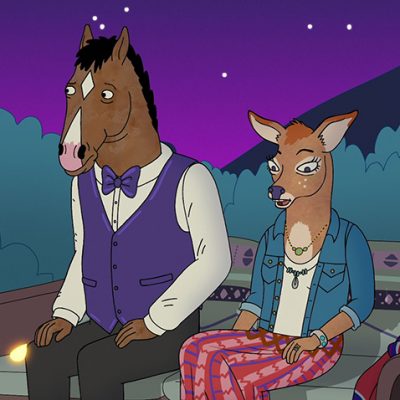 Who would’ve thought an animated series about a depressed horse, his acting heyday long behind him, would serve as the much-needed voice of reason in these madly uncertain times? Netflix’s Bojack Horseman is unflinching in its handling of addiction and mental illness on the dark side of show biz. In a similar vein to Toy Story, characters merely brought to life by a computer possess the force of emotional complexity. Bojack Horseman, an anthropomorphic horse voiced by Will Arnett, is mourning his glory days as the lead star in the ’90s TV show, Horsin’ Around, dwelling in his own depressive narrative then subverting it ten seconds later. Raphael Bob-Waksberg’s creation is centred in the alternative universe of Hollywoo, where humans and animals coexist equally. The safe space of animation is punctured as Bojack battles his inner demons, while grappling with the reality of Hollywood’s toxicity. What really sticks is the lack of gratification. Bojack even instructs the audience to scrap any delusions of some American Dream happy ending early on. A messy resolution, or lack of it, is to be expected as he declares: “closure [is] a made up thing by Steven Spielberg to sell movie tickets”. Unlike other comedy favourites such as Friends or The Office, Bojack’s gloom stretches out day by day. Cue the laugh track.

Naturally the only way to help a struggling celebrity is to reboot his career. Enter Diane Nguyen (Alison Brie), a ghost writer recruited to pen Bojack’s memoirs in a desperate hope that the most feared role as ‘has-been’ will be relinquished. After many sit-down sessions, Diane comes to the conclusion “all you are is just the things you do”. Not the groundbreaking epiphany that Bojack, or the audience for that matter, were craving. There’s no deeper excuse for Bojack’s aggressive tendencies. He is what he does, and it all boils down to abuse, whether of his peers or of substances.

As story arcs go, of course Bojack needs to redeem himself. He has to embrace his own constructed reality as his actions have consequences. They don’t simply disappear as quickly as Homer Simpson’s mountaineering expertise or circus career might. It is this existential detail which makes the line between cartoons and real life less distinct. This is how the audience are directly guided through the emotions of somehow sympathising with an actor who’s victimised everyone in his life one way or another. Bojack is the abuser of this tale. While he lets his guilt control his life, the reason he is so troubled is because he views past encounters as victims of his actions. Bojack’s hedonistic indulgences are manifested by the abuse he has inflicted on others. From the co-star he strangled in front of an entire film crew, to the unhealthy relationship he has with Sarah-Lynn, an actor he’s known since she was a child, to inappropriate advances on a minor.

Waksberg’s nihilistic tone doesn’t recoil from the devastating importance of the MeToo movement. The subject has been brushed over throughout the series. The very sitcom sounding ‘Bojack the Feminist’ episode particularly demonstrates this problem first-hand as all focus is on a disgraced fictional actor, Vance Waggoner. His racism and misogyny are sadly all too real as Vance overtly proclaims to his daughter “I don’t respect women” then “I hate Swedes now. Bet you didn’t see that coming!” Needless to say, the goal of the episode is to get him hired. Incidentally Bojack’s part as the feminist lasts less than twenty-five minutes. Bojack fully recognises the hypocrisy of the acting industry and uses it as a satirical warning. Rare and raw representations of depression, abortion, childhood trauma are also addressed, as these sometimes silenced topics allow the audience to cling onto the characters. The plight of cartoon animals has never been so human. When the MeToo storyline materialises you’re left with a knowing feeling of how it’s going to end, how it should end.

The debate around forgiving the abuser gets complicated, even philosophical, in this scenario. We’re conditioned to understand the characters’ inner-monologues so we learn from them. We’re exposed to Bojack’s most vulnerable moments. That is, until the latest episode. No main characters feature, and we are finally given the perspective of the women affected. They are struggling to stay afloat, but they will. Bojack Horseman is entirely self-aware, constantly evaluating then re-evaluating its characters, as if prodding us to do the same. The relevance of celebrity culture is grounded in the calibre of guest voice stars, from Hilary Swank to Rami Malek; Alan Arkin even brings J.D. Salinger back to life. By diving right into this version of Hollywood’s celebrity realm, it refuses to stay quiet. Eerily enough, the show debuted in 2014, long before the Weinstein story hit the headlines. How long has everyone known?

From animal puns to heartfelt confessions of loneliness, Bojack Horseman has not shied away from the grim terror of our times. Neither should we. Even when the second half of the final season drops any day now, it won’t be the end for these characters per se. The inevitably bittersweet ending surely coming for Bojack and the others is where the serialised story aspect pays off. No matter what happens, we won’t have the clean-cut ending everyone yearns for. So we must look up from our screens and carry on with our lives. Quite the layered tragicomedy for an animated series about an inebriated horse.