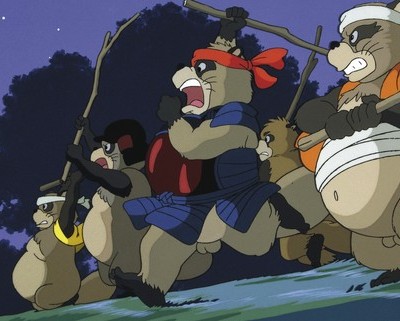 Pom Poko Studio Ghibli have always been ecologically minded; Nausicaa of the Valley of the Wind and Princess Mononoke stress the need for a balance between humans and nature, while you could equally write about the green themes in Ponyo, Laputa and Spirited Away. It is in Isao Takahata’s bizarre fantasy, however, that such themes are clearest. The Princess Kaguya director takes a look at deforestation through the eyes of mythical creatures known as tanuki, raccoons that can transform into different shapes. It is undoubtedly the strangest film from the studio, with non-sequitur jokes, a scene where a raccoon’s testicles turn into a funeral ship and the kind of dense Japanese cultural allusions that haven’t made it a crossover hit. Driving it all, however, is a potent anger at mankind’s encroachment on nature, and is enough to make any viewer an ecologist.

The Green Wave This little seen but provocative animation documents the same era of political unrest recently seen in dramas like Rosewater and EIFF film Desert Dancer. Iran is going through a revolution, and the government is not happy, repressing the uprising that marches on the streets bearing the colour green. It collates many of the blogs and tweets from the epicentre of the movement, and renders them in a series of evocative drawings with only one moving feature in the frame, such as a stream of blood or a flying brick. The Green Wave brings the injustice and violence of the era to light in an efficient and moving way, and asks uncomfortable questions about the response of the international community.

ParaNorman Stop-motion geniuses Laika (who also made Coraline and The Boxtrolls) slips the warm, human message of its madly entertaining zombie film into the narrative almost without you realising. ParaNorman is a film about a kid who is just a bit weird, treated with suspicion by all of his friends because he claims to see the dead. When actual corpses come to life thanks to an age-old curse laid upon the town during the Salem-era witch trials, it’s up to Norman to save the day. Yet as the back story of the witch trials emerges, and the reasons behind this curse are spelled out, Laika draw parallels between Norman, the witch and even the zombies, subtly suggesting that difference has always been persecuted throughout history, all while encouraging a little more humanity and understanding. When it is revealed, right at the end of the film, that one of the characters is gay, no big deal is made of this fact, which harmonises with the ongoing themes of acceptance and difference. Suddenly its criticisms of small town America are made painfully real.

Rango Gore Verbinski’s animation about a domestic chameleon running free in the wild deserts of America plays out like Chinatown for kids. The water has gone missing, and there are sinister machinations behind its disappearance. The dry, cracked deserts of California are vividly rendered, every frame seeming to choke a little bit with dust. Which makes the denouement, revealing where the water is going, all the more effective. When you consider the drought in the state – still going strong after several years – Rango emerges as a film that hides a real point beneath the daft comedy and homages to Apocalypse Now. Documentarian Ant Baxter, who made You’ve Been Trumped and its follow up A Dangerous Game, highlighted the way that golf courses round the world often drain a land of its natural water resources; seeing similar points made in a comedy about a lizard is somewhat unexpected.

Waltz With Bashir Ari Folman’s animation about his role in the war with Lebanon plays out like a form of therapy, where he collects memories of the war to piece together his fragmented recollections. Arguably, it isn’t there to make a political point – it’s more about the human impact on both sides. Folman uses a cell-shaded form of animation to vividly render his haunted dreams and abstract memories, creating images that are equally absurd and horrifying. Deciding against live action doesn’t soften the blow of the atrocities it depicts, and sometimes the animated images are even more effective at getting under your skin. It’s a documentary like no other, and one of the most honest and thought provoking films of the genre.