Pixar’s mix of  invention and creative intervention looks to have paid off again in The Good Dinosaur, writes Nathanael Smith 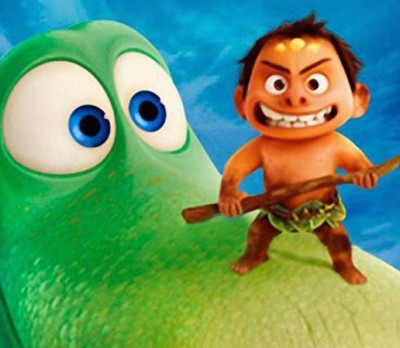 2015 has been great for animation fans. While I’ve spoken at length about Song of the Sea and The Tale of the Princess Kaguya and chatted with the people behind the charming Moomins film and the delightful Shaun of the Sheep, this is also the first year ever to have two Pixar films released. Inside Out was marvellous, conveying incredibly complex ideas with beautiful simplicity and winning everyone’s hearts in the process. This week sees the release of The Good Dinosaur, which I can’t wait to watch. Yet the reason that The Good Dinosaur has only just arrived on our screens now is because it was, at first, delayed, rehashed and changed to be almost unrecognisable from its original iteration. One thing that many people know about Pixar’s inner workings is that it has a Brain Trust. This is the group of people at the top of the company who consult, produce and, in some cases, intervene on films during their production. Sometimes this has unfortunate consequences – Brenda Chapman, their first female director, left Brave only for the final film to end up being very close to her original vision anyway – but it’s all a part of the studio’s dedication to creating the best end product possible. The Good Dinosaur underwent one of their most dramatic overhauls, hence its delayed release and a 2014 without one film from the studio.

The film reached crisis point only a few months before it was supposed to be released. “It had become complicated,” head honcho John Lasseter told Wired magazine. In that same interview, co-founder Ed Catmull also lets on how much the crew had lost faith in the film, saying that “after a while you can get worn out, and the people in the middle of it lose perspective. At that point, it helps to bring in fresh voices.” These fresh voices came in the form of replacing the original director Bob Peterson with the current name in the credits, Pete Sohn. The delay, from May 2014 to November 2015 was stark and statement-making, pretty much starting the film from scratch in order to produce the best film possible.

What did the original Good Dinosaur look like? It’s difficult to say but Lasseter’s assessment of it as overly complicated is reflected in the fact that the new version would be stripped back to the emotional heart of the film. From its inception, The Good Dinosaur was about the central boy-and-his-dog relationship, between Arlo, the titular apatosaurus and Spot, the prehistoric cave-boy he befriends. Certain developments, as well as cast and crew interviews, suggest that pretty much everything else aside from this has been changed. A talented voice cast, including John Lithgow, Bill Hader and Judy Greer were removed from the film to strip away some of the supporting cast and focus it on the central pair. Lithgow amicably said that they had “dismantled” the film, although he didn’t seem to mind.

Pixar’s philosophy is very much product-focussed, all about achieving the final film possible; this doesn’t explain how Cars 2 ended up being released, but the process largely works for them. Lasseter describes how every film they make is, at some point, a disaster that they have to work their way out from. The result is magic like 45 minutes of near-silent cinema in Wall-E, or one of the best sequels ever with Toy Story 2, the first film that Pixar needed to re-start. These are public processes – everyone knows about the problems behind Ratatouille and Brave – because the studio are happy to demonstrate the difficulty of creativity and the effort (and occasional pain) that goes into making something properly great. It’s arguably what makes the studio stand out; one wishes that Dreamworks had a few more creative overhauls.

As such, for all its troubled production, The Good Dinosaur is set to be another one of Pixar’s hits. Early reviews have highlighted that it skews younger than many Pixar films (which is great, as long as people don’t misinterpret it as not being as funny or arch as others), and have celebrated the visual aspect of it. This is what I’m most excited to see. The landscapes in the trailer are almost photorealistic, yet are still the product of designers and artists creating a very specific look – “better than real” as Catmull describes it. The House of Lamp have pushed the boundaries with the technology they used for creating these vistas, with comingsoon.net reporting the use of “3D volumetric clouds being used to diffuse the light.”

The limp, forgettable short The Blue Umbrella proved that impressive animation techniques do not a good story make, but I’m excited to see these new processes in action. I don’t find the delay particular concerning, as if the end result is a simpler, more heartfelt story then the change of directors and starting from scratch will have been worth it. Ultimately, if The Good Dinosaur is in the same league as Inside Out, and with the critically lauded Peanuts movie on the way, 2015 is set to be a landmark year for the medium.

The Good Dinosaur is out on Friday.

Peanuts is out on Christmas day.