Nathanael Smith assesses some of this week’s new animation releases 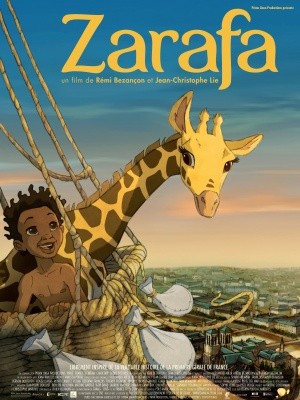 Zarafa This French-Belgian co-production is about a young boy who escapes from slavery in Sudan and befriends a young giraffe who’s on his way to France where he’s to be offered to the zoo as a gift. The adventure takes in some big themes – rather admirably, the French role in African slavery isn’t dodged – and fits in major set pieces to keep children entertained. The narrative is a little sprawling, almost by necessity, as it travels from deserts to cities, across seas, mountains and into France. Enthusiasts of the medium should check it out for the hand drawn beauty of the animation, which is rich and lush. The style is clean lines and thick colours, rendering the busyness of cities and the wonder of air travel with a flair often missing in CG. Some plot beats don’t work and it’s not always the most exciting or engaging narrative, but it’s something a little different from standard cinema fare.

Zarafa is out in cinemas on October 9th. The Children’s Cinema Club has handily compiled all the places it is screening : http://www.childrenscinemaclub.co.uk/zarafa/

The Big Knights The Big Knights was an animated television series that ran from 1999-2000, and this ‘film’ is actually a compilation of episodes, released into a few cinemas. If it has an episodic pace, that’s because it’s even kept in the credits and title sequences of each story. So it feels like a cheap way to make a bit of money from an established property. Earlier in the year, The Moomins on the Riviera took a well known franchise and told new stories with them, which I wish had happened with The Big Knights – the fun of the characters could be well-suited to a feature length adventure. If you’ve seen all of the television series already, the only appeal will be seeing the stories on the big screen. Some screenings are playing with workshop materials as part of education programmes.

This small scale British release tells the tale of two knights, voiced by Brian Blessed and David Rintoul, who roam around Borovia, righting wrongs and generally being chivalrous chaps in the clumsiest and most destructive way possible. The animation style is the kind of kid’s doodle look that characterises Peppa Pig from the same animators, and it will no doubt appeal to the same audience. The voice cast are excellent; Blessed’s booming tones are perfect for the pompous knight, with Alexander Armstrong’s narration complementing the tone of comic adventure. The Big Knights is a trip to the cinema of gentle pleasures, specifically for the youngest crowd.

The Big Knights is playing across Scotland throughout October and November. Find dates here: http://www.independentcinemaoffice.org.uk/films/playdates.aspx?ID=8081

Hotel Transylvania 2 The worst film of the bunch is inevitably the one getting a wide release. The first film squandered a promising premise with a rather lacklustre story about a controlling dad unwilling to let his daughter date a non-monster. There were some neat jokes, but the story was rote and one of the weaker animations that year. The sequel is somehow worse, doubling down on the whole ‘father not letting his daughter do what she wants’ trope – something we should collectively retire from cinema – and stringing out a plot about whether his grandson is a monster or not, even though this loses its dramatic potential two scenes in.

There are, once more, a couple of really sharp jokes, such as a riff on Picasso’s painting, and the kind of amusingly naff gags that you would find in Cloudy With A Chance of Meatballs. However, there’s a huge over-reliance on the same joke structure, where something from the human world is replaced ‘hilariously’ with something from the monster world, such as nursery rhymes being re-worded with ghoulish imagery about zombies. Throw in a thick streak of gags-to-make-you-gag about women, pop tracks that no kids would listen to and a collection of men having mid-life crises and you realise you’re watching yet another Adam Sandler film, with all that that entails, only this time it is animated.

Hotel Transylvania 2 will be playing in all the multiplexes from October 16th.