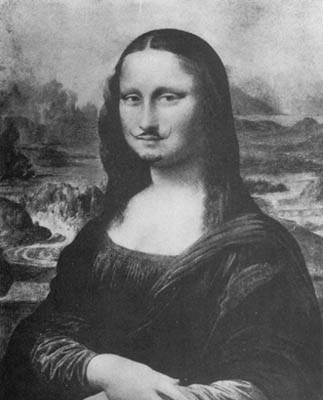 The standard of artwork produced last century was high. New materials, moral and intellectual freedoms, social upheaval and war as well as consciousness on a global scale produced art of such diversity and extremes that it is impossible to grasp it all. However, I’ve come to realise that by 1919, everything had been said and done, and it doesn’t look like the 21st century will come close to matching these achievements — but it is still early days.

Neither context nor history should inhibit anyone’s enjoyment, but what makes a work great is how large it looms, and how inescapable that work of art is. And so it is that I am therefore delighted to announce, that the greatest work of the century is officially Marcel Duchamp’s L.H.O.O.Q.

A while ago, fooling around with some artist friends, we began to explore the notion that when a work of art went on display in a gallery, it was somehow destroyed. This was largely a joke and yet it expressed what we saw as the difficult relationship between creation and reception. As well as the financial requirements of producing art for the public, there was something to be said about the consumption of art, or more properly, art as a consumer item — and whenever our group got together, the idea seemed to pop up again — when a work of art goes on display, it’s at that point it’s destroyed.

In the art gallery of today we never stop to think about what’s bolstering the whole shebang. It’s common for travelling art shows to be supported by airlines, banks, insurance firms and alcohol. I remember being struck by the Van Gogh retrospective in the 1990s that was sponsored by a European cheese manufacturer. Nobody seemed to mind — in fact the connection seemed normal, until I left the gallery and saw beneath the Van Gogh image on the poster, the prominent logo indicating that the show was sponsored by a Dutch, semi-hard cheese. Coagulated milk products, I thought. Where does the connection lie?

I felt that I had spotted an act of vandalism at the heart of the exhibition process, even though I knew that art has been hooked up with commercial interests for a long time, and explicitly so since the end of the nineteenth century. It was this that led me to accept that L.H.O.O.Q. by Marcel Duchamp was the most important work of twentieth century art.

L.H.O.O.Q. is the title of that much imitated defacement of the Mona Lisa by Marcel Duchamp. It’s a well-known image, but then so is the Mona Lisa, and that is the point. Defacement, appropriation and re-attribution are acceptable aspects of today’s artistic processes, so while L.H.O.O.Q. is a well-known image, nobody considers it as an epoch-defining masterpiece — although it is.

Without L.H.O.O.Q. there is no Warhol, no Koons no Hirst, no nothing

In fact, having seen modernism fragment into everything from abstraction to pop art, it’s easy to see why Duchamp’s L.H.O.O.Q. informs the whole complex that we discuss as art these days, and casts a shadow over every artistic practise, most especially post-1960.

Getting the pun out of the way first, L.H.O.O.Q. forms a homophone in English (‘Look’) and in French serves up a joke: elle a chaud au cul — which you might crudely state as ‘she has a hot ass’. Duchamp himself offered the neat translation ‘there’s a fire down below’ — but however it works, you get the point.

Here is what Duchamp later said of L.H.O.O.Q.: ‘I had the idea that a painting cannot, must not be looked at too much. It becomes desecrated by the very act of being seen too much.’

Unlike Vladimir Umanets who vandalised a Mark Rothko painting in 2012, Duchamp contented himself with defacing a reproduction, which is more telling as it’s the reproduction he’s really criticising. Already by Duchamp’s time, a commercial cult had risen around the Mona Lisa, and its value had come to be predicated on how easy to reproduce it was — the same thing which incidentally gives Van Gogh’s works their value. Often, in fact, such works are not given high financial value because of any other merit aside from the worth they have as mass reproductions.

L.H.O.O.Q. did not have an auspicious start in life. Marcel Duchamp performed the work on an eight by five inch postcard print of the Mona Lisa, and sent it to Francis Picabia in 1919, and it was then published in the magazine ‘391’ in 1920. Thus, the greatest artwork of the twentieth century was not exhibited, launched or sold for a huge amount. Nor did it receive critical attention — it simply appeared in a fairly obscure Dadaist magazine, and was treated as a reasonably clever joke. Then it was left to simmer for forty years.

Although he stopped painting in 1913, Duchamp continued making art until he died in 1968, although up until 1960 he remained invisible to critics, patrons, buyers and other artists, not because he was disliked, but because this gesture of stopping painting concealed him from the art world at large. Duchamp kept on working and exhibiting, but unlike today, there was no category for what he did, and so his work tended to inform only the highest echelon of artists, among whom he remained a favourite. If there was one great driver in Duchamp’s world, it was how the interchange between the person and the art was interrupted. The basic message of L.H.O.O.Q. is easy for anyone to understand, and always has been: art is trivialised by over exposure, and when it is reproduced on the scale that the postcard from of the Mona Lisa represented, it’s taken out of the realm of the contemplative and placed in the realm of consumption — which means commodity. 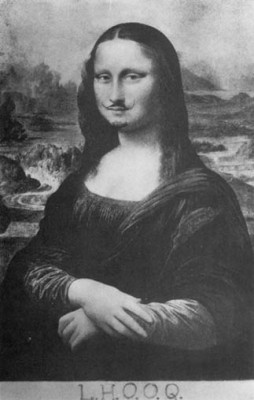 Although Duchamp continued working on many different projects throughout his life, the defaced Mona Lisa followed him, surprising him from time to time. Duchamp, for example, admitted that he wasn’t interested in demonstrating the homosexual influence of Da Vinci, but he did at a later date realise how surprisingly easy it had been for him to invert the image’s gender. In L.H.O.O.Q. Duchamp doesn’t just destabilise the gender of the Mona Lisa, he creates a mirror-like mechanism whereby the moustache and goatee can switch the image back and forth between femininity and masculinity. Visual consumption is therefore quantified in a joke, based on projection and reversibility, while combining an amazing statement about authorship and reference.

This introduced several of the great themes of what was to become Conceptual Art — notably the reproduction of art, and the appropriation of the work of others. When Picabia republished L.H.O.O.Q in March 1920, having not received a copy of Duchamp’s original in time, he simply made his own, but he forgot the beard. When Duchamp later caught up with Picabia, he completed the appropriation by adding the beard, and they both signed the piece in a postmodern act of re-authoring, redistributing the artistic signature and emphasising the aspect of appropriation. This is made all the more pointed when you consider that Da Vinci’s original Mona Lisa is not signed.

L.H.O.O.Q. by Duchamp then is the most persistent legacy in all of twentieth century art. L.H.O.O.Q. opened up the horizon in terms of appropriation and it continued to be ‘drawn on’ with Picabia, Dali, Philippe Halsman (1954) and Enrico Baj (1954) all re-authoring it. Duchamp had a go also, returning the Mona Lisa to her original condition in a work which was simply a reproduction of the Mona Lisa, although it was named by him L.H.O.O.Q. shaved (1965).

Nobody can escape L.H.O.O.Q. today, and in fact no conceptual artist of our time has been able to say more about the relationship between art, its viewers, its buyers and its nature than Duchamp did — although they try.

This started in the 1960s when pop artists like Andy Warhol discovered Duchamp. For pop artists, Duchamp was an incredible discovery, because everything Duchamp had done validated their work. L.H.O.O.Q. is a deep a criticism of art as commodity — the only criticism needed, as it happens — and from the day that Duchamp created L.H.O.O.Q. art was no longer retinal, but involved a mental, intellectual or critical aspect also.

In the case of L.H.O.O.Q, and so much art beyond it — including all conceptual art — the impact of the art is in the fact of its existence. That is why Martin Creed for example can exhibit crumpled up pieces of paper — because visual contemplation and taste were wrecked by L.H.O.O.Q. The new conditions for art as offered in L.H.O.O.Q. were presentation and display, public presentation, and the institutional parameters of the gallery.

I expect that L.H.O.O.Q. was seen as mocking in its day, and as a small representation in an obscure magazine, it would not have been considered as a serious work. But L.H.O.O.Q. has come to stand for more than that, and is without doubt the greatest work of twentieth century art, and one from which artists, gallerists and critics of art will never escape.