It’s time for a new patron saint of Scotland, a fearless champion who could see off the doomsters and austerity bullies. Ron Ferguson knows the very man 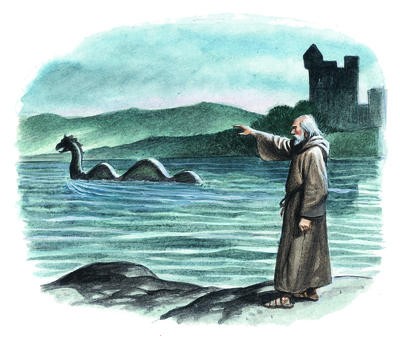 We could do with a new patron saint to match the current political excitements in Scotland. After all, the adoption of Saint Andrew as patron saint of Scotland was made on extremely dodgy grounds. Here are some of the facts about Andy (aka Andreas, a Greek name). His dad was called Jonah and his brother was Simon Peter. A partner in a wee fishing co-operative, he was one of the first of Christ’s disciples. The church historian Eusebius says that Andy later preached the gospel in what are now Greece, the Ukraine and Southern Russia; hence he is also the patron saint of these countries. That is surely more than enough work for one bloke.

So how Scotland? Well, there was a tradition that Andrew’s relics were transported from Constantinople to Italy, and that the bones of one
arm were nicked or bought by St Regulus who was carrying the arm when he was shipwrecked off the coast of Fife. (Some traditions have it that the arm was buried at the holy shrine, Central Park, Cowdenbeath, and others that it was held in a church at Kilrymont, which became the seat of the Bishop of St Andrews.) When a punter was healed after touching the holy elbow, the local tourist board saw the potential, using the marketing slogan, “It will do you no arm”.

Cambridge-educated historian Dr Simon Young claims that the story of St Regulus bringing Andrew’s bones over to Scotland is fictitious. He believes that the alleged bones of St Andrew were probably rifled from a Pictish tomb.
But, I hear you cry, if it’s time for Andrew to move into the shadows, who should move into the limelight? Step forward Columba, a tumultuous flesh and blood hero who indubitably lived much of his life in Scotland and whose Celtic community helped to reshape Scottish life. Columba’s voyage from Ireland to Iona in 563 is one of the great foundational missionary journeys of European Christian history. The flesh-and-blood Columcille (Dove of the Church) was a prince, a contemplative monk, and a fearless adventurer.

As well as evangelising parts of Scotland, Columba and his little community made Iona a place of pilgrimage. Not content with challenging Scotland, the robust saint took on the Loch Ness monster. The first recorded appearance of the fearsome beast is in a biography of Columba by Abbot Adomnan of Iona. The encounter happened on a journey up Loch Ness to convert King Brude of the Picts. The biographer reports that the hungry monster, which had already had a Pict for lunch, attacked one of Columba’s monks. Columba sprang into action.

“The blessed man raised his holy hand, and invoking the name of God he formed the saving sign of the Cross in the air and commanded the ferocious monster, saying, ‘Thou shalt go no further nor touch the man! Go back at all speed!’ At the voice of the saint the monster was terrified and rushed down the river.” Loch Ness Monster 0, Columba 1, after extra time. Mel Gibson, eat your heart out.

As every Scot – religious or not – knows, the boy done good. Columba was held in such high regard in Scotia that his relics were used to inspire the troops at the Battle of Bannockburn. If we can find Columba’s bones – or even just one arm – we should parade the holy relics at Hampden Park when Scotland are playing; not only that the bones should go with the Tartan Army into Greece, Russia, and the Ukraine. Get It Right Up Ye!

Yes, it’s time to let Andrew concentrate on these foreign places. Or spend more time with his family. Columba is Scotland’s man of the hour.

Columba was born in Ireland on 7 December, 521. Happy Birthday Columba!