Have pro-independence arguments been marginalised in the run-up to the referendum?
Iain MacWhirter examines charges of media bias – and why more editorial and
political diversity is needed. 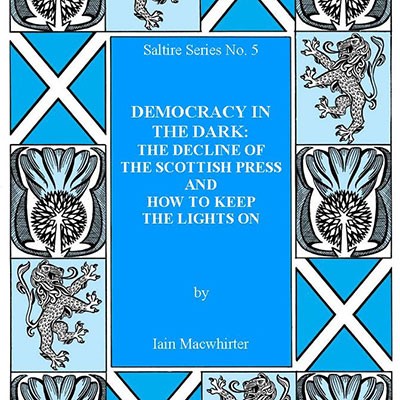 In January 2014, in a report entitled Fairness in the First Year the University of the West of Scotland claimed that the BBC and STV in Scotland were favouring the No campaign in their news output by a ratio of 3 to 2. The team did a content analysis of 730 hours of BBC Scotland and STV news programmes19 and concluded that negative stories about independence dominated the output of the two Scottish domestic TV channels. “Both feature a preponderance of anti-independence statements, a majority of anti-independence evidence and a heavy personalisation of the debate around the character of Alex Salmond, with the latter often portrayed as selfish and undemocratic”. The report indicated a predominance of reports leading from the negative as in: “Questions mount over independence”, “6,500 Trident defence jobs under threat”, “Electricity costs could rise under independence”. The SNP or Yes spokesperson is generally given a right of reply, but the defensive nature of the response itself conveys a message.

The BBC’s response to the University of the West of Scotland report was furious since it is supposed to have a charter obligation to fairness and balance, and this report indicated a lack of both. They tried to undermine the scientific credibility of the research, rather than reflect on why this was the case. However, from my own knowledge of the internal workings of the BBC in Scotland I can state pretty clearly that there is no conscious political agenda at work. What they are doing is reflecting the groupthink of the UK and Scottish press, which invariably approaches independence as a complex of dangers, warnings and risks, which the Yes campaign has to answer, and also of “blows” to Alex Salmond which challenge his credibility.

Partly because of a charter obligation to be impartial, BBC editors are very reluctant to go beyond the consensus. The agenda of most BBC news and current affairs programmes, even in the internet age, still comes from the press. They don’t simply lift stories from the papers, of course, but they look to the press for their themes – especially the Guardian, the Daily Mail, the Times, the Telegraph and, in Scotland, the Herald, the Scotsman and the Daily Record. As editors and presenters scan the headlines of these papers, and cross-reference them with the news events of the day, such as First Minister’s Questions, a view emerges of the “feel” of the day. When they brief their presenters on what issues to question politicians on breakfast news programmes, editors will advise them to cover the questions being raised in the press. Plan B, bank departures, pensions etc.

This is a perfectly understandable. How else are they to gauge public opinion on a day-to-day basis? I was a BBC presenter for over 20 years, in Westminster and in Holyrood, and this was always how I worked. On the days of the week analysed above, I would certainly have expected to question Alex Salmond or Nicola Sturgeon on those questions. Questions such as: “How can people have confidence in independence, when key economic figures like the head of BP say that it is irresponsible?” “Why should Scots vote for independence if it means higher food prices?” Of course, the difference with the broadcast media is that politicians have an opportunity to answer back: to put their case. But it doesn’t mean that TV and radio interviews are immune from the newspaper groupthink. The character of the questions will often have the same colour as the newspaper headlines.

When interviewing Alex Salmond, for example, the very way I would put the question would suggest: “who do you think you are, a mere politician, to question the head of one of the biggest companies in Britain?” Now, BP isn’t actually a British company any more, but most people think it is, which is why I would put the question in that way. Similarly, with the NIESR the unspoken subtext to my question would be: here is yet another respected gathering of economists saying that independence won’t work, who are you to say any different?” This question only works because it is surfing the conventional wisdom of the press that the report was only the latest of many to demonstrate that an independent Scotland would become something of a tartan banana republic.

As the academic who conducted the West of Scotland report, Professor John Robertson, identified the problem as the unconscious attributions of authority to stories and statements originating from one side. “Reporting tended to link pro-independence evidence from Scottish government sponsored committees to their sponsorship,” he said, “while UK advisory groups such as the Office of Budget Responsibility, the Institute for Fiscal Studies, and several Parliamentary, Treasury or House of Lords committees were typically treated as independent, despite linkages to UK government and other government departments or units with a vested interest in the union”.

As UK government departments, political parties and London-based think tanks raise questions about independence, these are projected at full volume by ministers. The climate of uncertainty that this generates – fears of debt, currency instability etc – feeds back in the shape of comments from business people like Bob Dudley of BP. It is hardly surprising therefore that Scottish voters when asked think that if they vote Yes they may lose their jobs, Scotland might have to leave the EU, that taxes and mortgages will rise while their pensions are put at risk. These are opinions that have condensed into political facts. Other opinions do not carry the same authority.

And there is another dimension to this imbalance which was not explored by the West of Scotland study which only looked at the domestic output. The UK-generated news and current affairs content is overwhelmingly unionist and overlays the regional programmes. Programmes like Question Time and Any Questions will discuss independence week by week without any obligation for political balance. For example, on 22nd February 2014, one week after George Osborne had said that Scotland would be denied use of the pound, the programme discussed whether England would be better off if Scotland left. The panellists were: Alistair Carmichael MP (the unionist Secretary of State for Scotland); Frank Field, an English Labour MP who supports an English parliament; the Conservative MP Nadhim Zahawi; and the feminist journalist, Laurie Penny. There was no representative of the Yes campaign.

Imagine a mirror-image edition of Any Questions which had Alex Salmond; Jim Sillars; the Green MSP Patrick Harvie; and a Yes-supporting journalist like Lesley Riddoch. This would of course have been inconceivable and the BBC would never have transmitted a programme because they would have been accused of bias. Exactly the same unionist default operates on its television equivalent, Question Time. I am not arguing that these programmes should not be transmitted in Scotland. However, it is beyond doubt that they contribute to the general climate of opinion in Scotland. Again, the impression conveyed by these programmes is that independence is an exotic and alien concept that the panellists have difficulty understanding when they are not outright contemptuous of it.

This bias is generally unconscious, though sometimes one has to wonder at the editorial processes at work in the BBC. On one of the few occasions when Question Time was broadcast from Scotland in 2013 (13/6/13), the panel was made up of no fewer than four militant unionists: Nigel Farage, the Ukip leader; George Galloway, the Respect MP; Ruth Davidson leader of the Scottish Conservatives; and Anas Sarwar, the deputy leader of the Scottish Labour Party. They were pitched against the SNP’s Westminster leader, Angus Robertson and the journalist, Lesley Riddoch, who is not a nationalist but says she expects to vote Yes. How this could have passed under any interpretation of the BBC’s Producer’s Guideline is a mystery, and further undermined the BBC’s claim to impartiality.

bias is generally unconscious, though sometimes one has to wonder at the editorial processes at work in the BBC.

Now, I feel obliged to repeat that I am not, and have never been, a member of the Scottish National Party. My own personal view is that Scotland should ideally be in a federal relationship to the UK. However, as a political commentator, I find it disturbing to see the legitimate arguments of nationalist groups marginalised by a partisan press and media. This is not a healthy climate in which to hold a referendum on independence, and it is storing up understandable bitterness among Yes supporters. I am not arguing for censorship, or for telling editors how to edit their papers. Nor am I saying that UK newspapers should not be sold in Scotland or that BBC programmes with a metropolitan outlook should not be shown north of the border. But there really is only one way in which this feedback loop can be disrupted, and that is through editorial and political diversity.

It makes it impossible for the consumers of journalism, the voters, to make a reasoned assessment of the choices open to them if they are exposed only to one side of the argument. Voters tend to read newspapers hurriedly, even in Scotland with its long history of journalist consumption. They follow impressions based on what they hear on the media. They cannot be expected to subject what they read to a systematic content analysis using alternative sources. Opinion surveys and focus groups will tend to confirm what the papers are saying because that is, of course, the conventional wisdom.

This is a very difficult problem to resolve, precisely because we do have a free press in this country, or at least one that is broadly free from direct political interference. However, the concentration of press ownership, and the fact that the Scottish press is in steep decline, means that the debate is skewed. But some way has to be found to break the feedback loop. The risk is that, otherwise, the independence debate will be conducted, rather like the Iraq War, on a false prospectus.

This article is the final chapter of “Democracy in the Dark”, a recent pamphlet published by the Saltire Society as part of the Saltire Series.

In “Democracy in the Dark: The Decline of the Scottish Press and How to Keep the Lights on” MacWhirter discusses the theme of the Scottish print press, its viability in the digital age and gives  his own views on how the referendum has been covered.

The Saltire Society has a strong tradition of acting as a stimulant for debate and discussion on the matters that affect our widest civic interests. We are re-introducing the Saltire Series of pamphlets as a means of contributing to those discussions. The original editorial position stands the test of time, 75 years after the first publications.

‘They will express the considered judgements of their own authors, to whom complete freedom has been given; and are not to be taken as representing the policy of the Saltire Society, whose object is to promote that free and informed discussion without which no sound policy for Scotland’s future can be shaped.’

Re-established in 2013 the Society as commissioned some of the country’s best authors and commentators to express their views on a range of current themes. These pamphlets are available to purchase as a limited edition and feature a newly designed cover from previous Saltire Book of the Year and pamphlet author Alasdair Gray.