A casualised economy, sold-off sports fields and an over- reliance on cars has produced an obesity epidemic. Chris Harvie on how we might shed some lard 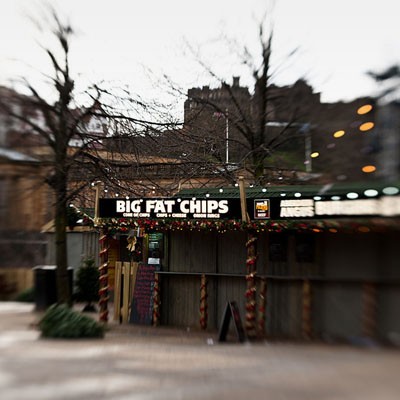 Diet and car use has made us obese.

The late Alan Whicker once ventured into the Ozarks and talked to mountainy men. They were all for fat. ‘Them hippies settled in these parts, lived off lentils.They didn’t put on fat, so they froze. You need fat under the skin, like we had.’  Tennessee folk were often of Scots descent, so this may have had something archaic attached to it.

As a journalist in the 1950s Neal Ascherson found a similar line coming from Germans who had survived Stunde Null in 1945: ‘Here’s my wife,’ said one, admiringly, ‘Isn’t she fat!’

Some  years ago archaeologists dug the Swabian Venus out of a cave in the Alb above  Tuebingen: 30,000 years: all bosom and bum, cleft with an emphatic vagina. So  the fat wife may have been something racy of the soil, and not just a reaction to the privations of 1945.  Burns  in his bawdy poems insisted that ‘a good mowe’ was the people’s birthright, and  this does something to explain (if not excuse that ‘all lads together’ feeling)  of much of The Merry Muses.

In fact from the realist pictures of the time – David Wilkie, Alexander Geddes and  so on, folk seem to have been slender. Wilkie (then only 18) has a truly  massive laird sizing him up in ‘The Chalmers-Bethune family’ (1804). He may  have been exceptional in his realism though – as if weighted by its  syllable-sequence – did the very ponderousness of ‘Han-o-ver-i-an’ tip the  scales away from scrawny Sawney?

Body-Mass  Index means what it says, and in Brian Cox’s fine forensic TV series ‘Sweet Temptation’ this balance is still there. Our man has been around, and knows  where the hits come from: historically interwoven with ‘Scotland’s progress’:  sugar and usqueba/aquavit to hep us up, tobacco and opium to calm us down. In  1950s Presbyterian Motherwell ‘Ye’ll come and take pot luck!’ meant an  invitation to sweet tea and round after round of scones, butter, jam, clootie  dumplings on birthdays, and enough home-made cakes to stock a Cranston café.  Washed down for the bairns with Barr’s drinks – not Irn-bru but delicious  lemonade percussive in its fizziness. Barrs made their dough from providing a  beer substitute that didn’t have high-paid ‘puddlers’ falling into lakes of  molten iron.

Looking  at photos of political groups and family from the 1930s to the 1960s folk are  still, despite the carbohydrate impact, quite small. Granny Harvie  (Aunt Teenie to everyone else and looking the part) was until her last few years (she died at 90) always on her  feet in Union Street: cooking,  gardening, shopping – the Dalzell Co-op Store built by her brother-in-law,  where she’d worked as a milliner, was two hundred yards off, the kirk a  quarter-mile away. Being on her feet most of the day, she burned it all off.  Her husband, in fourteen years of retirement, was more sedentary, gardened on  good days, smoked. He died of a coronary at seventy-seven.

Aunt  Jessie’s car didn’t turn up until they moved from Crossfield, purchased for  demolition in 1961, to the Loaning, a bungalow with a big garden and  garage.  The car was still a minority  acquisition: only one in ten Scots households had one in 1970.

Today  the major circuit is car-borne: the car being a once-for-all choice, and in  Scotland shelter as much as transit. It caters for the weekly supermarket shop  and the work journey (or several part-time jobs, several journeys, to different  places), suspending work for the chatter of local radio or Smooth Classics at  Six. Filling up the car and getting its ailments seen to, buying the carry-out  meal, complete the day.

Ageing  and marital instability being what they are, this fractures at its margin to  the condition of older Scots towns, which at first glance look much like they  always did, with strings of twinkly shop-fronts along the bus-routes. But most o f the little shops have mutated into ‘wee businesses’ notably hairdressing or  flowers or pet stuff, off-licences, fast food, betting shops, money-shops of  various kinds, charities, pawnshops, mobile phones, criminal solicitors  offices, MSPs and councillors surgeries, and …

… new developments in done-up town centres: ‘Fest Places’. Highland dress shops and hirers, boutiques, gift shops for the marriages, seemingly reviving along  with stag-and-hen dos, that we now go in for. Along with public sector chic – coffee shop franchises, church kitchens, chain  charities, hospital or disabled centres. Into both lifestyles food and mobility  intrude and mould, but chances of exercise diminish, along with an anticipated  rhythm of life and considered attitude to what we eat. In an increasingly  casualised economy, food – Brian Cox’s ‘milk chocolate hit’ in spades –  lubricates.

The  butter and milk of Motherwell ‘pot luck’ have formally taken leave, only to  come back: commercial, unsupervised – and unburned-off. As distinctiveness  fades from the urban landscape, it imprints itself on distended skin, in the  cinemascope and technicolour of tattoo.

How  did we get here, pursuing the United States in the world obesity league? Think  of the late Christopher Hitchens – gags, fags and booze –and then of that altogether  weightier contrarian G K Chesterton, and his dictum: ‘inside every thin man  there’s a fat man trying to get out.’ Apply this to Scottish contemporary  history. In the absence of the map that a discernable economic structure gives,  how did we reach the exotic, unsatisfying fields we are browsing in?

Not  a monocausal explanation, but consider.  In the late 1980s there was a long teachers’ strike, settled on terms  which led a weakening profession to drop most of its out-of-hours work. So kids  did less sport and teachers less running about after them. Result: less  exercise all round, and paradoxically an exam- rather than child-centred  education. Declining use of sports fields led to them being sold off for  housing, just as the discounted sale of council houses yielded enough cash to  buy cars.

In  1979-87 Thatcher’s infantile monetarism plus the oil price slump had triggered  a second wave of deindustrialisation, with Ravenscraig finally closing in 1992:  comfort eating and motoring around absorbed the fallow hours. The fat man got  out, and has been on the loose since. ‘Erst das Fressen, dann die Moral!’ ran Bert  Brecht’s slogan: ‘First eat, then think.‘ But  in a society whose productive, manufacturing economy was structurally  shattered? – or quite literally offshored – how do we get back to where we once  were?

Or  did consumption flow into the vacuum? On a tide of new verbiage?  On the Holyrood Economy Committee, 2007-11, the theme of ‘superfast broadband’ was seldom absent. It was taken as  axiomatic that industry wouldn’t  expand without it. But was this really the case? Or did saturation media  coverage – Bruce Willis and bigger bangs whenever you wanted them, Grand Theft  Auto IV – provide a sensory parallel to ‘all you can eat for £6.99?’

Coatbridge  is said to be Scotland’s fat city. I recently found myself outside its  Sunnyside Station waiting for motorist friends to extricate themselves  from  the spaghetti-junction  between there and Glasgow. Cars were zip-zapping in all directions, though very  co-operatively: scarcely a passenger onto or off the ‘Blue Trains’ (there for  over half-a-century) wasn’t carefully set down, waited for, or picked up. Only  a handful made their way to the interesting town centre on foot. (Coatbridge is  handsomely-served by its Wikipedia  entry; Motherwell’s is useless).

I  remembered a poignant, rather ominous TV documentary on the place from twenty  years back: about the body-building culture that had grown up in the deserted  steel-industry workshops. Musclemen flexed under empty gantries. Later years  have seen this become a chemical ‘way out’, through addiction to  testosterone-enhancing drugs: maybe a third of the West’s needlemen. But think:  rather more than ironically, the curriculum of this laboratory/school for  ‘entertainment security executives’ catered for the same hormones that produced  in 2008 the catastrophic hits of ‘extreme finance’ on RBS, HBOS.

Scotland’s  manufacturing is down to 10% of GDP. Compare this with the 30% plus of  Baden-Wuerttemberg (Daimler, Bosch, Voith, etc.) and recovery scarcely looks  possible, let alone independence. Yet here and in the history is the central geotechnic argument for viability.

Scotland  can cater for the combination of oil and gas, enhanced by carbon-capture, on- and offshore wind, current and tidal generation, along with the growing  importance of counter-inundation. The last is a new player and lastingly  important. By 2050 over half the world’s people will live on flood-plains or on  littorals under fifty miles from the sea.  A hurricane- and tsunami-threatened urban world, ill-designed and  riskily-sited – look at New York in the aftermath of Storm Sandy, and be  afraid – will desperately need a complex work-site amid appropriately nasty  weather with centres of research and construction to hand, and a mobile  workforce that knows the life.

Given  the foregoing, are we reverting to the Picts, Picti, ‘Painted Folk’? And maybe  this mobile tribalism is no bad idea: a thought from Abu Dhabi and the voices  wafting up from the Hilton swimming pool, the men off the rigs, in the one bar in town. Do the grounds for hope lie, as ever, in history, and the philosophy o f Marx?  As in ‘At the Circus’:  take it away, Groucho!

Oh Lydia, oh Lydia, say, have you met Lydia?
Lydia The Tattooed Lady.
She has eyes that folks adore so,
and a torso even more so.

Lydia, oh Lydia, that encyclo-pidia.
Oh Lydia The Queen of Tattoo.
On her back is The Battle of Waterloo.
Beside it, The Wreck of the Hesperus too.
And proudly above waves the red, white, and blue.
You can learn a lot from Lydia!

When her robe is unfurled she will show you the world,
if you step up and tell her where.
For a dime you can see Kankakee or Paree,
or Washington crossing The Delaware.

Lydia, oh Lydia, that encyclo-pidia.
Oh Lydia The Champ of them all.
She once swept an Admiral clear off his feet.
The ships on her hips made his heart skip a beat.
And now the old boy’s in command of the fleet,
for he went and married Lydia!

You can learn a lot from Scotland, if  you’re not fussy about how…