A new campaign to persuade the Scottish parliament to stop investing in arms is launched today, writes Kat Hobbs 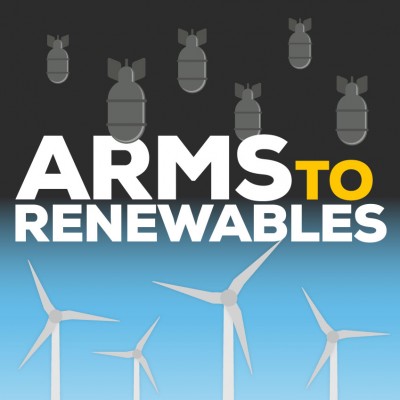 The Campaign Against Arms Trade (CAAT) is launching an ambitious new campaign at a conference in Edinburgh today. Anti arms trade proposals have gone from strength to strength in Scotland, with our recent success in lobbying the Edinburgh Science Festival to ditch Selex ES, one of the world’s biggest arms manufacturers, as a sponsor. Post-referendum and in an age of austerity, the value and morality of the arms industry is under question and the campaign has garnered widespread support. Analysis has revealed that the Scottish Parliament scheme is funding arms, tobacco and environmentally destructive fossil fuel companies. The fund oversees a multi-million pound pension pot for 127 MSPs, and is overseen by a board of trustees, most of whom are also MSPs. In 2015 the fund gave £587,000 to three leading arms traders: Rolls Royce, Ultra Electronics and Meggit.

Rolls Royce makes the reactors that run Britain’s nuclear submarines, including those armed with Trident nuclear missiles based at Faslane. Ultra Electronics and Meggit help to make military drones used for lethal strikes. The University of Edinburgh withdrew its investment from Ultra Electronics in 2013. The news has prompted angry condemnations from some MSPs, who say that parliament’s moral integrity is being destroyed. Campaigners argue that if Scotland is to carve out a place for itself as a different, more progressive nation in the UK then Parliament must put its money where its mouth is- and certainly not be investing in firms which support the running of the controversial Trident nuclear missile program.

Campaign Against the Arms Trade have joined Friends of the Earth and others in calling for the Scottish Parliament to change its investment policy. Andrew Smith, spokesperson for CAAT, said “Public money should be used for public good, not to support companies like Meggitt and Ultra Electronics that profit from war, instability and conflict.”

Public opinion on the arms trade is shifting. UK-made weapons have been used in Israel’s attacks on Gaza, and to repress democracy movements across the Middle East. The UK armed both Russia and Ukraine – and supplied all sides in Libya’s civil war. The wars that have been waged, such as those in Iraq, Libya and Afghanistan, have caused devastation and fuelled further conflict. People are ready for a change.

Arms sales don’t enhance security: they fuel conflict, support repression and make the world a more dangerous place for all of us. And we all pay the price. We’re subsidising arms companies by hundreds of millions of pounds a year to export misery and destruction around the world and, at home, the government is spending billions on military technology we do not need, while vital public services are being cut.

The government justifies its support for the arms trade by arguing it needs to protect high skilled manufacturing jobs. But despite all these resources, the number of jobs in the arms industry is on a long-term decline, and today the industry is, in its own words, “flatlining at best”.

But Campaign Against Arms Trade have another vision. Real security involves tackling the causes of problems, not creating more, and climate change is one of the biggest that we face. It threatens all of our lives: Millions of people already face food and water shortages. Extreme weather events, flooding and droughts will displace populations and create conflict over resources. If we really want a safer world, we must cut carbon emissions fast.

The UK is in a powerful position to play its part. Offshore wind power has amazing potential in the UK. We have the largest wind resources in Europe and already have as much capacity installed as the rest of the world combined. We also have substantial wave and tidal resources. CAAT’s research shows that a move towards offshore wind and marine energy could produce more jobs than the entire arms industry.

If we invest now the UK would be in a leading position in technologies that will be in high demand, will have major export potential, and will also help other countries cut their carbon emissions. But this potential won’t be realised without action. It’s time for change, and continuing to invest in companies and industries which bring nothing but destruction and conflict won’t create a different world. The Scottish Parliament could lead the way to a setter, safer world – if we can persuade MSPs to take action.

If you can’t join the conference but would like to get involved in the campaign, email outreach@caat.org.uk to get in touch with the Edinburgh CAAT group. New members are always welcome.