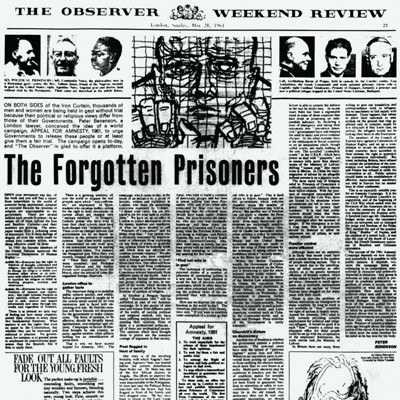 In November 1960, a British newspaper ran a story about two Portugese students sentenced to seven years in prison for raising their glasses in a toast to freedom. Usually this kind of story would not have caused any lasting furor, mild shock perhaps. On this occasion, however, the paper was picked up by a British lawyer on his daily London commute. His response was to write an article, ‘The Forgotten Prisoners’, which was published in the Observer newspaper. The outrage he expressed led to a campaign called the ‘Appeal for Amnesty 1961’. His name was Peter Benenson and this appeal, re-printed in newspapers around the word, was the genesis of Amnesty International.

Of course, human rights defenders existed before Amnesty, individuals working to bring about justice in countries which oppressed and brutalised their people. But this newspaper campaign galvanised the beginnings of a global movement which brought together individuals from all walks of life who felt a similar outrage. The campaign also coined the term, Prisoner of Conscience, the basis of Amnesty’s campaigning work ever since. It set in place an approach to human rights campaigning which holds to this day – that one person can make a difference. And most importantly, that those individuals who do speak out against oppressive regimes around the world are not forgotten have been detained, imprisoned or simply disappeared.

Amnesty International published its first Annual Report in 1962 in which it set out its principal objective: ‘to mobilise public opinion in defence of those men and women who were imprisoned because their ideas were unacceptable to their governments.’ It pointed to Articles within the Universal Declaration of Human Rights, adopted by the UN General Assembly 14 years earlier. Within that first year, Amnesty identified and documented 1200 prisoners of conscience. And within only seven years, Amnesty had contributed to the release of 2,000 individuals.

In 1977, Amnesty International was awarded the Nobel Peace Prize for ‘having contributed to securing the ground for freedom, for justice, and thereby also for peace in the world.’

Over the last half-century, Amnesty has expanded its original focus. Appeals to prevent the execution of prisoners of conscience led to opposition of the death penalty for all prisoners, viewing the execution of any human being as the ultimate denial of human rights. The organisation began campaigning to end the unregulated global arms trade; highlighting the link between poverty and human rights abuses; working towards an effective system of international justice; and in latter years its work on ‘security and human rights’ has been a response to the ironically coined ‘war on terror’ which has led to an erosion of human rights and civil liberties for people of all nations including here in the UK.

Governments in Libya, Syria, Bahrain and Yemen have shown a willingness to beat, maim or kill peaceful protestors to stay in power. Repressive governments such as Azerbaijan, China and Iran are trying to pre-empt revolutions in their own countries.

In the 50 years since Amnesty International was formed there has been a human rights revolution built through greater access to information, awareness and understanding – a collective response to injustice. As a result, the call for freedom and dignity has evolved into a global demand, nowhere more fervent or on such a scale than within countries of the Middle East and North Africa in what has become known as the ‘Arab Spring’. Social networking sites and citizens’ media now severely limits governments’ attempts to hide their oppression behind a cloak of silence and offer an unprecedented opportunity for human rights change. But this change still stands on a knife edge.

According to Amnesty International’s latest report documenting human rights around the globe restrictions on freedom of speech exist in at least 89 countries. Torture and other ill treatment are rife in at least 98 countries. There are still prisoners of conscience in at least 48 countries and Amnesty have documented unfair trials in at least 54 nations.

Governments in Libya, Syria, Bahrain and Yemen have shown a willingness to beat, maim or kill peaceful protestors to stay in power. Even when dictators have fallen, the institutions that supported them still need to be dismantled, so the work of activists is far from over. Repressive governments such as Azerbaijan, China and Iran are trying to pre-empt similar revolutions in their own countries.

Away from the international headlines, thousands of human rights defenders are being threatened, imprisoned, tortured and killed in countries including Afghanistan, Angola, Brazil, Burma, China, Mexico, Russia, Turkey, Uzbekistan, Vietnam and Zimbabwe.

In our own backyard, Amnesty campaigned vigorously against last year’s Strathclyde Police Taser pilot, undertaken without due process or regard for human rights implications. And we are currently working with others to highlight the ongoing discrimination and prejudice faced by Scottish Gypsy Travelers. So, whilst we look outward to human rights violations and abuses, we also need to be vigilant of our own governments and institutions.

However, there have also been many successes. Fifty years since those humble beginnings and Amnesty International now consists of 3 million supporters, members and subscribers in over 150 countries and territories. In that time it has worked on over 50,000 individual cases and 96 countries have abolished the death penalty.

Just last year, we saw the release of Burma’s pro-democracy leader and human rights defender, Daw Aung Sang Suu Kyi, after 19 years of detention; and the Nobel Peace Prize was awarded to Chinese dissident Liu Xiaobo, despite his government’s attempts to sabotage the ceremony.

Not since the end of the Cold War have so many repressive governments faced such a challenge to their stranglehold on power. But at the same time, never have we been more aware of human rights violations around the world – thanks to new technologies, the advent of social networking, and greater awareness about the rights and responsibilities of citizens and their governments. But some things haven’t changed – the power of individuals to make a difference. And it all started by a chance newspaper article 50 years ago.