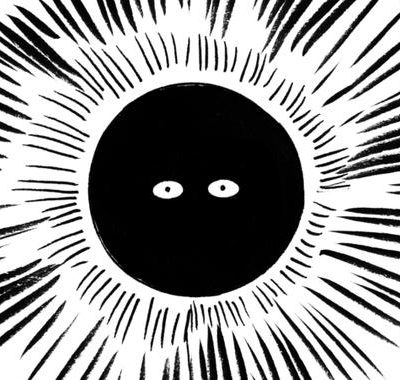 Rob Churm moved from Leighton Buzzard to Glasgow in the late 1990s and has been an influential figure in the city’s fluid and fertile art and music scene ever since. Geographically and artistically, his work sits in a space in between Richard Wright at The Modern Institute and Frank Quitely at Kelvingrove Art Gallery and Museum. Which goes to prove that the CCA is the ideal home for a Rob Churm show at this present time. It’s eight years since his solo exhibition at GoMA and six since his last prominent exhibition in Glasgow, when he was part of the roster of the much-missed Sorcha Dallas Gallery. Without the representation of a gallery, Churm and a number of other artists may have been held back in recent years but he has nonetheless persevered and benefitted from grant support from Creative Scotland. Hopefully this exhibition of new and existing work will bring his work wider attention.  Churm’s practice centres around his obsessive drawing process. The results are somewhere between Giovanni Piranesi, Tom Phillips, Raymond Pettibon, Leo Baxendale and William Blake. Sometimes there are surreal alien figures and sometimes responsive eye optical art with hypnotizing crosshatching or moiré. Moreover, his drawings spill off the page, off the wall on to record sleeves, zines and in posters for concerts and club nights.

Churm was part of the nationwide survey Generation – New Art in Scotland in 2014 in a project that I instigated for Dundee Contemporary Arts. I invited Churm, Raydale Dower and Tony Swain to recreate their Le Drapeau Noir project for the 2010 Glasgow International. For both projects, the artists programmed a series of events with performances and readings alongside their artworks. One of Churm’s favourite authors, Steve Aylett captured the spirit with the expression that “the best way of getting into something is to think of it as mischief.” The Crime Studio (Phoenix, 2000). More recently, there was a commission from DC Thomson to respond to their comic archive. Churm took inspiration from the Jonah strips that appeared in The Beano in the late 1950s and early 1960s. And appropriately enough, Churm has just self-produced a new publication/comic for the CCA exhibition entitled The Exhaustion Hook.

Parallel to the art is a love of and commitment to DIY music. As a founding member of Park Attack and Gummy Stumps, he has long participated in the music community in Glasgow. He has also been booking shows for the Old Hairdressers since the Le Drapeau Noir project of 2010.  The venue consistently presents some of the most vital concerts in Scotland. Churm then co-curated Fantom Cinema with Marc Baines at the same venue for last year’s 2016 Glasgow International with participants including Torsten Lauschmann and Ela Orleans. In this spirit, Churm’s CCA exhibition will also have audio/visual elements including a collaboration with composer and sound artist Joe Howe (Gay Against You, Ben Butler and Mousepad) and performance footage Churm documented of Pee Six with FK Alexander. There will be a music and performance evening on Friday 16 June, featuring Blood Stereo, Malcy Duff, Kathryn Elkin and Churm himself.

I visited Churm in his studio within the Glasgow Independent Studios recently. He was busy at work on large scale works. He was copying and combining existing drawings into hybridized works that allowed him to deal with such a large space as he usually makes small scale work. The research into DC Thomson comics was also proving an influence on new surfaces of tracing paper and tape being retained on the finished drawings. Churm will exhibit a new series of colourful works which have been developed in collaboration with Glasgow Print Studio and some previously unshown work produced during his 2013 Cove Park residency. He will also present some of the work that reflects upon his involvement in the music scene. Posters for Park Attack gigs with V-Twin and at Optimo, artwork he produced for a Lightning Bolt gig, a drawing for Jamie Bolland’s publication On All Fours and sleeve art for Fortunate Fumes by Sound of Yell (Chemikal Underground Records).

Churm updated me earlier this week with the note: “It’s a pretty full on show, lots and lots of work, I’ve kind of gone for a bit of a Pettibon outsider artist approach to the hanging… sort of more overload rather than a delicate spare show but in concentrated zones so hopefully people can get a handle on it rather than being swamped.”

It is genuinely commendable that CCA is presenting Glasgow talent as they celebrate their 25th anniversary. At this time of year, graduating students (and their relatives) can look at a show like Rob Churm’s and see a route in terms of a career path. It’s an affirmation for him to receive a major institutional acknowledgement in the city that he’s lived in for nearly twenty years. Churm has responded with ambitious and mischievous work.