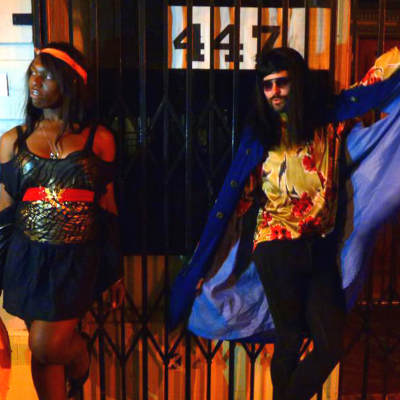 When the Arika organisation started out as producers of experimental music festivals, their work on Instal at the Arches in Glasgow and later Kill Your Timid Notion at Dundee Contemporary Arts broke the mould in terms of bringing major international left-field musicians and sound-makers to Scotland. As the artistic landscape shifted, the ground Arika occupied opened up for a new generation of sonic explorers to put on their own events, perhaps inspired by some of the veteran acts they’d seen at Instal and Kill Your Timid Notion. As more experimental music festivals grew up around them, Arika moved beyond sound to consider the social and political forces that gives art its meaning. The end result has been a series of weekend-long Episodes, in which Arika have hosted various provocations, discussions, performances and screenings which create a dialogue – where art and activism meet – in a kind of counter-cultural salon.

This weekend, Episode 8 – Refuse Powers’ Grasp, looks at ideas that stem largely from the concept of the prison-industrial complex. The term was first coined by veteran black civil rights activist Angela Davis in a speech she gave in 1997 which became the basis of her book of the same name. It refers to how prisons are used as an ideological tool in which oppressed minorities are invariably incarcerated more than a privileged majority. This is particularly the case in relation to queer, black and trans people.

Refuse Powers’ Grasp brings together an international array of thinkers, artists, writers and performers to square up to the forces that attempt to cage such minorities as they argue for progressive alternatives to prison.

One of the highlights of Episode 8 looks set to be a presentation by Gallery of the Streets, a radical performance troupe led by director, activist and prison abolitionist Kai Lumumba Barrow, which uses everyday spaces as sites of resistance.

In Glasgow, Barrow will work with local groups to oversee an open rehearsal for her ongoing development of (b)reach: The Fugitive Chronicles. With the title drawn from Marge Piercy’s 1976 feminist sci-fi novel, Woman on the Edge of Time, the show is a black queer retelling of Percy’s story about a former prisoner committed to a mental hospital, who begins to communicate with a being from a utopian future. While totalitarianism and other of society’s ills have been wiped out in that future, the death penalty remains.

“We are going to be doing an experiment,” says Barrow, who since the 1970s has been at the forefront of abolitionist grassroots organising in the United States. “We’re looking at a model for social change, working with our bodies to visualise and verbalise our stories concerning state violence, and doing that in a collaborative way.”

Barrow’s activism includes co-founding Critical Resistance, a prison abolitionist organisation co-founded with Angela Davis and others. Barrow has worked with numerous other grassroots  organisations, including the Provisional Government of the Republic of New Afrika, the Black Panther Newspaper Committee and Queers for Economic Justice. She formed Gallery of the Streets in 2010, and, using black feminist theory as a jumping off point, has created temporary site-specific installations in collaboration with marginalised communities directly affected by existing hierarchies. The open rehearsal for (b)reach is the first stage of a much longer project that Barrow aims to complete by 2020.

“I’ve been trying to organise forms and ideas into something we’re calling the praxis of imagination,” Barrow says. “I’ll be using multiple artforms that work together to create a single story, and through all this, looking at how the imagination can be used as a tool for liberation.”

Also appearing at Episode 8 will be Eric A. Stanley, who, as well as being an assistant professor in the Department of Gender and Sexuality Studies at the University of California, co-edited the 2011 anthology, Captive Genders: Trans Embodiment and the Prison Industrial Complex, which has recently been republished in an expanded second edition by AK Press. Along with Chris Vargas, Stanley directed the 2006 film, Homotopia, and this year the pair made Criminal Queers, which will be screened at Episode 8.

“Criminal Queers is a campy film we made with no budget over a ten year period” says Stanley. “It’s quite funny, as probably most people who are in the film are going to be at Episode 8, but the film is a humorous way of looking at serious issues.”

Captive Genders opens with a foreword that looks back to the Stonewall riots that took place in 1969 after the Stonewall Inn, a gay bar in Greenwich Village, was raided by police. The book brings together writing by current and former prisoners, activists, academics and others in an attempt to understand how race, gender and sexuality are played out and defined by the prison-industrial complex. In this way, the book highlights a sector of society whose struggles with incarceration are rarely seen in mainstream media.

“A lot of mainstream LGBT organisations have never thought critically about imprisonment,” says Stanley. “Mainstream LGBT politics has a disavowal of LGBT people who are incarcerated.”

One of the most high-profile trans figures currently imprisoned is Chelsea Manning, the U.S. Soldier who, as Bradley Manning, was court-martialled and sentenced to thirty-five years in a military prison after disclosing almost three quarters of a million classified military documents to WikiLeaks. Manning has written a chapter for the new edition of Captive Genders.

“Unfortunately,” says Stanley, “Chelsea Manning could spend the rest of her life in prison. She’s a horrific example of all the things prison can do to you – a microcosm of what thousands of people are going through right now.”

Episode 8 – Refuse Powers’ Grasp runs from October 21st-23rd at Tramway and The Art School, Glasgow. Full programme details can be found at www.arika.org.uk