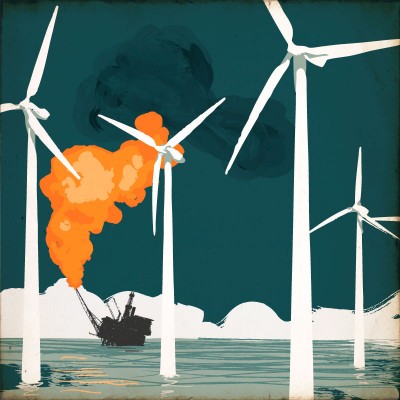 Oil. It’s been a politically charged issue in Scotland for decades. It’s the topic on everyone’s lips this week, following the dramatic drop in prices and the finger-pointing about whose predictions were furthest from the mark. And it has been one of the biggest areas of political difference Greens have with the rest of the political spectrum.

For many years the SNP have seen this issue as principally one of ownership. The slogan “It’s Scotland’s oil!” still means a lot to some of them, while Greens are more concerned with how much of the stuff gets burned than the question of ownership.

Indeed during the referendum it was one of the clear points of difference between us and our colleagues in the Yes campaign. On several occasions I remember taking part in public meetings at which an SNP speaker would be cheered to the rafters for promising that independence would let the Government squeeze every last drop out of the North Sea, and then I’d reply that independence must be seen as an opportunity to end our reliance on fossil fuels and start taking climate change seriously. Quite often, I’d be cheered just as enthusiastically by the very same people. Something somewhere wasn’t adding up.

So the Green Yes campaign published a paper (which you can still find on our website – PDF) dealing with this contradiction and pointing out that while UK and Scottish Governments might disagree about the tax regime at any given moment, they were both committed to essentially the same policy: maximum extraction. We proposed that if Scotland instead prioritised maximum revenue in the short term, at the expense of long term extraction rates, we would have a chance of funding a more rapid transition and ensuring that the end of the fossil fuel age needn’t mean pulling the economic rug from under people, as well as leaving a good proportion of oil and gas in the ground.

That last goal is important because, as anyone who’s remotely interested in climate change knows, the world has far more fossil fuel than we can afford to burn. The latest estimate was published barely a week ago and shows that over 80% of the world’s coal, half the world’s oil and a third of gas are “unburnable carbon” – reserves which we simply cannot use as fuel if we’re to have a reasonable chance of preventing catastrophic climate change.

Even the non-fuel uses (which are innumerable) are tricky, given the proportion of the products they go into which end their lives in incinerators. That fossil carbon still ends up in the atmosphere. Alternatives are achievable, and must be developed quickly.

And since fossil fuel companies are valued according to the reserves they hold, on the assumption that they will all be realised, what we’re looking at is a vastly over-valued industry. A carbon bubble, to which the Scottish economy is dangerously overexposed.

Of course nobody imagines that it would be either desirable or achievable to shut off the oil industry overnight. A deliberate long term plan to reduce our reliance on it, in both energy and economic terms, would have left far fewer jobs vulnerable to the shocks which come from price drops like the current one.

Instead of developing that plan and beginning that transition, most politicians north and south of the border are busy pointing fingers at each other about who should “solve” the problem of the current low price and the loss of jobs which will result. Whether you’re an unashamed petrolhead or the deepest Green, that short term crisis really matters. I don’t want to see the industry’s offshore skills lost and its supply chain destroyed, because they will be vital to building the renewable alternative that our economy, our environment and our energy system need.

But desperately scrabbling around for ways get back to ‘business as usual’ will help nobody. The economic prospects of the north-east – and the jobs which people depend on – need long term confidence, not the continued cycle of booming and busting which we’ll see if we remain precariously balanced on that carbon bubble, pretending it will never burst.

Similarly the transition to the post-carbon economy which is our only viable future will not happen (at least not in time) if oil companies are constantly indulged, given massive tax breaks every time the price drops. That would only promote exploration for yet more reserves we can’t afford to burn, burdening our economy with more stranded assets.

Low oil prices will have a mix of economic effects – saving some people money, but leaving many others vulnerable. It’s time that both governments started coming to terms with the transition that’s needed, shifting our skilled workforce toward the clean energy system that will sustain our economy without wrecking the life-support system it rests upon. This is quite simply the only option for jobs, for energy, for the economy, and for the environment which allows us all to live.

Patrick Harvie MSP is Co-convener of the Scottish Greens.

All that money wants