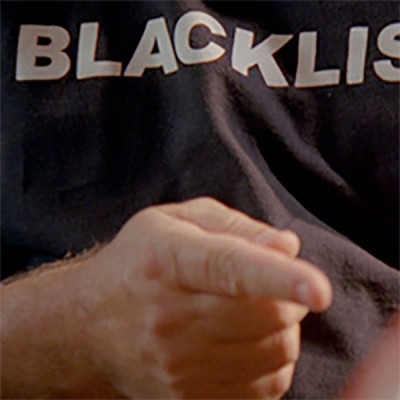 When a blacklisted construction worker on camera compares his experience to something written by Kafka, given everything that has gone before, you know exactly what he means. Especially as, rather than such a statement coming from some Cold War era East European dissident as he reads his once secret files, these words are being uttered by a middle-aged man in a London pub in the early years of the twenty-first century. The incident is captured in the twenty minute video that forms the heart of Blacklist, Lucy Parker’s multi-media work-in-progress running this week at Edinburgh’s Rhubaba artspace. It comes during a round-table discussion between several men who were on a list of some 3,213 names compiled between 1993 and 2009 by the UK-based Consulting Association. Those on the list had either spoken out about on-site working conditions or were known trade union members or activists. With the lists circulated among construction companies bank-rolling The Consulting Association, those refused work had their livelihoods destroyed, sometimes with fatal results.

Blacklist is part stock-take, part show-and-tell of Parker’s year-long researches into how multi-national construction firms colluded with state forces to prevent people they regarded as trouble-makers from finding work. The material on show will feed into the making of a much bigger film that will expand on the issues of social control. As well as the above named video, Blacklist features a second video that focuses on a writers’ workshop where one of the blacklistees reads a short story based on his experience. In tone, superficially at least, the story resembles some of James Kelman’s early work, which similarly had his characters trying to get by on the breadline against a back-drop of unskilled casual labour.

A wealth of archive film clips demonstrates the historical roots of blacklisting and infiltration of protest movements. As Tom Wood’s 2015 film, Blacklisting, makes clear (during its screening in Parker’s show) the former dates back to the early days of twentieth century capitalism, when in 1919 the anti trade union, pro-free market Economic League was founded.

Remarkably, The Economic League was only closed down in 1993 after sustained pressure from the likes of journalist Paul Foot, who obtained a full list of the League’s blacklist. At the time of its closure, The Economic League held files on 22,000 people. These included thousands of shop-floor workers, as well as journalists and some forty MPs, including Gordon Brown. 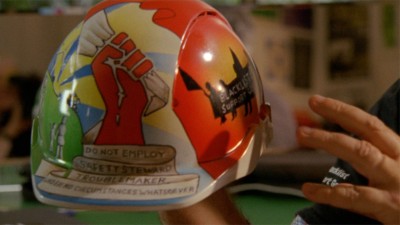 The Consulting Association was started by key figures from the Economic League, including its director, Ian Kerr.  In evidence given to a 2013 inquiry at Westminster convened by the Scottish Affairs Select Committee, Kerr stated that TCA was founded using a £10,000 loan from construction giant Sir Robert McAlpine Ltd.

McAlpine is known to have invested a total of £20,000 into TCA, buying up the Economic League’s blacklist for TCA use, with some fourteen major construction and civil engineering companies known to have helped form the organisation.

Following raids by the Information Commissioners Office in 2009, files on the 3,213 were discovered, with speculation that these may have formed just a tiny percentage of actual files that existed. One of those named was Helen Steel, one of two environmental activists who were sued by fast food giants McDonald’s after distributing a pamphlet highlighting what they saw as some of the company’s more bizarre behaviours. The documentary film about the case that came to be known as McLibel is also shown as part of Blacklist.

With companies such as Balfour Beatty and Laing O’Rourke known to have been involved in TCA as well as McAlpine, the independently run Blacklist Support Group was set up in 2009. After sustained pressure at the courts and in the media, at preliminary hearings at the High Court in October this year, eight firms were reported to have apologised for their role in blacklisting. Proceedings are set to continue in 2016. 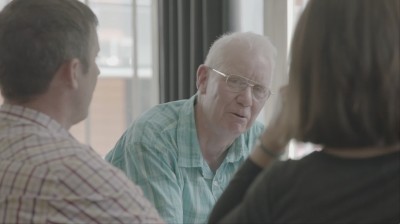 As company director Cullum McAlpine revealed to the 2013 Scottish Affairs Select Committee, McAlpine projects where workers are known to have been vetted include the Quarter Mile project in Edinburgh and the Marie Curie Centre in Glasgow, as well as the ground-works for the Olympic Stadium for London 2012. While the latter is made plain in Parker’s show, it’s seeing copies of actual documents previously kept on file by TCA that’s the most shocking. As jaw-dropping as the existence of these must be for those who still have faith in western democracy, none of it will surprise anyone who’s ever worked on a building site.

Such out and out exploitation has been historicised culturally in many forms. One can go right back to The Ragged-Trousered Philanthropists, Robert Tressall’s thousand-page plus epic of working class labour exploited by big business. The book was first published in 1914 after the house-painter turned writer’s death three years earlier, and is now regarded as a classic.

One could look too to McAlpine’s Fusiliers, Dominic Behan’s 1960s folk ballad that spoke satirically of the role of Irish migrants employed by major construction companies such as McAlpine (Laing and Wimpey also get a mention in the song). Originally recorded by The Dubliners, McAlpine’s Fusiliers went on to become a construction workers’ anthem of sorts.

More recently, there’s the case of The Shrewsbury Two, in which construction workers and trade union activists Des Warren and future actor Ricky Tomlinson were arrested some five months after the 1972 national building workers strike against casual labour with no employment rights had ended. A stage play, United We Stand, continues to be supported by the Shrewsbury 24 Campaign as part of the attempt to overturn the criminalisation of some twenty-four building workers prosecuted following the strike.

A decade later, Alan Bleasdale’s TV play, The Black Stuff, and the five plays they spawned that became Boys from the Blackstuff, offered a heart-breaking portrait of blue collar life in an era of mass unemployment in the UK. From the same era, albeit lighter in tone, the long-running comedy drama series, Auf Wiedersehen, Pet, nevertheless offered up an authentic depiction of the gang mentality of itinerant British labourers forced to look for work on building sites in Germany.

In the 1990s, Riff-Raff, directed by Ken Loach (whose work is represented in Blacklist by clips from his 1995 Spanish Civil War drama, Land and Freedom) charts the travails of a labourer played by Robert Carlyle who finds work on a site in London converting a derelict hospital into luxury flats.  Carlyle’s workmates include a character played by Ricky Tomlinson who is sacked from the job after requesting safer working conditions.

If Loach recognised the ideological drive behind money-focused construction companies in Riff-Raff, twenty-four years on it is made even more explicit in Parker’s work. But there is a focus on community too in Blacklist, both in the video footage and in the work’s presentation. In Rhubaba’s unheated warehouse space, Blacklist is invested with the chilly authenticity of a building site porta-cabin tea room. This atmosphere is made complete by the plain wooden table and benches that nestle beneath a flat screen TV on which the clips are shown, and which are designed for discussion as much as endless mugs of tea. 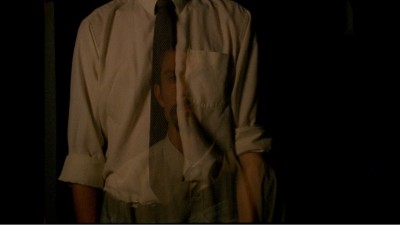 This raises issues of how, after being left out in the cold, workers already unconsciously engaging in self-education become further politicised by proxy, forming a loose-knit community or collective as they go. As appositely cosy as all this sounds, Blacklist is already en route to becoming a vital creative document of a piece of hidden history still being played out.

A stone’s throw from Rhubaba, major swathes of Leith Walk have been transformed into building sites, as has much of Edinburgh city centre, and indeed many major cities whose local authorities are intent on so-called regeneration. Outside each site, billboards and signage embrace the caring, sharing touchy-feely language of philanthropic community-based initiatives rather than the commercial money-spinners they actually are.

On-site safety, according to the signs, is paramount. Even so, now the winter is setting in, one wonders how those workers on the ground are coping, what their pay and conditions are, and how who is employed is decided. There is a very small coterie of people making millions from the construction industry. But it’s not those who occupy the buildings that result from these developments who get the benefit, and it’s certainly not the people who put them up.

Blacklist comes at a time when barely a day passes without reports of police infiltration of protest groups, while the UK government’s proposed Trade Union Bill seeks to outlaw any kind of activism. If the Bill is passed, it won’t be long before the sort of blacklist held by the TCA is no longer necessary to keep workers in check. If he’d been around to see it, Kafka would have had a field day.

Blacklist runs at Rhubaba, Arthur Street, Edinburgh until December 6th. Endings, an event to coincide with the show, takes place at Rhubaba this Friday December 4th at 6.30pm, and will feature presentations by legal academic Dr Chloe Kennedy, bassoonist and artist Faith Limbrick and music and film programmer Peter Taylor. Soup and popcorn will be served.