Isao Takahata’s stunning fable The Tale of Princess Kaguya is unlike any other major studio animation, writes Nathanael Smith 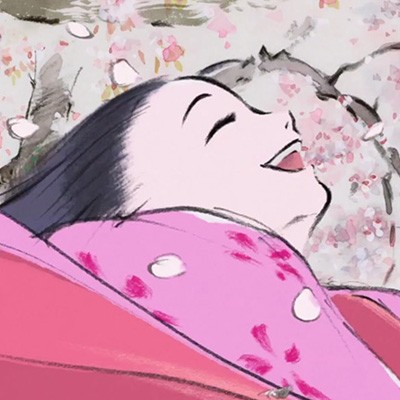 Last year, Studio Ghibli revealed that they didn’t know what was next for them, with rumours of closure thrown around but never confirmed. Hayao Miyazaki, their most famous figure, retired from feature film making and the studio suggested they were wrapping up production, with nothing else in the pipeline. Two films were left to release from their catalogue before a foggy future awaited, the as yet unreleased When Marnie Was There, and this, the possible last film of co-founder Isao Takahata. There’s a sense of wistfulness, of the passing of time and of the new invading the old that runs throughout The Tale of Princess Kaguya, a lament that good things must come to an end, and so Takata’s masterful animation is shot through with melancholic undertones for those who follow the fate of the studio.

Telling the story of a girl who miraculously appears in a bamboo shoot, growing up in the countryside at super speed before moving to the city to become a noble lady, Kaguya is a fable about making the most of the time you’re given. Her father tries to use her supernatural origins to attain status and money, but she’s more at home in nature. The tension between humans and nature is one of Takahata’s main preoccupations, and here he reinforces a sense of authenticity to rural life that is absent in the city. Everything thrives and grows in the bamboo covered hills where Kaguya spends her childhood, including the people there. They move and act in a totally natural manner. Yet when the story relocates to the city – where the middle section slows the pace down and adds unnecessarily to the running time, the film’s only flaw – everyone there moves in a way that is more like a performance of traditional Noh theatre, a form which relies on exaggerated and stylised gestures, with dance-based movement. The forest is old and rich in history, the city is new and fake yet it is also the future that drags everyone in. Kaguya is almost an elegy for the simplicity of life in the countryside, but one that looks for life and truth in every area.

It’s almost impossible to separate the old/new and nature/city dichotomies from the film’s form. Animated unlike any other major studio production these days, The Tale of Princess Kaguya draws attention to the film as a piece of art, rejecting realism in favour of a hand drawn medium that looks both ancient and timeless. Takahata has always made excellent use of white space within his frame, often filling it quite sparsely. He said in an interview that the style was based on “representing things without drawing what isn’t necessary.” This means that the film is very visibly made with human hands, with the level of detail and colour changing according to the tone of the scene. At times like a lush watercolour, at others like a stripped back line drawing, Kaguya is never less than stunning. Accompanied by one of the best scores from Ghibli stalwart Joe Hisaishi, The Tale of Princess Kaguya is a film about the thrill of living, pulsing with the delight of experiencing everything for the first time. There’s sadness for the loss which life will always entail, but Kaguya (and, perhaps, Takahata) concludes that the joy along the way makes it all worth while. The same could be said for Studio Ghibli as we perhaps bid it farewell.