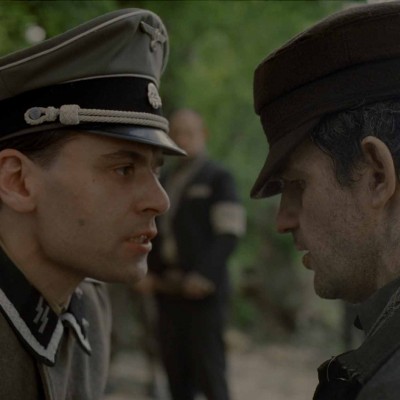 ‘You have forsaken the living for the dead.’

This damning accusation is made towards Saul Auslander, the central protagonist of this new Hungarian drama set inside a World War II concentration camp. Written by Clara Royer and Laszlo Nemes, with the latter making his feature film directorial debut, Son of Saul is a powerful and unflinching account of the unbearable events that occurred during the Holocaust. Since its release last year at the Cannes Film Festival – where it was bestowed with the jury’s Grand Prix award – the film has gone on to achieve great critical success, winning ‘Best Foreign Language Film’ at both the Golden Globes and Academy Awards, respectively. Geza Rohrig stars as Saul, a Hungarian Sonderkommando whose job is to assist in the death process at Auschwitz concentration camp sometime around late 1944. As the beginning of the film explains, Sonderkommandos, held special status amongst the other prisoners and were separated from the rest of the camp. The film opens with Saul helping to usher newly arrived prisoners into the death camp, where they are promised both warm soup and coffee once they are showered. However, they are instead led naked into a gas chamber where (from outside) we hear their horrific screams and cries of pain as the Sonderkommandos gather the clothes and belongings they have left behind. Not only this, once the victims have been killed it is the Sonderkommando’s role to remove the dead bodies, wipe the blood from inside the gas chambers and help to dispose of the victims’ cremated ashes. They are literally surrounded by death.

We witness all of this via the Saul, but not in a gratuitous fashion. Rather, Nemes utilizes tight framing as the camera follows him closely around the camp via several long takes, with most of these shocking details shown at the edge of the frame. We glimpse them, and that is horrifying enough. For the most part, Saul is a silent figure numbed by the traumatic events he has witnessed. When a young boy remarkably survives the gas chamber – only then to be suffocated by a Nazi doctor – Saul claims him as his son. The narrative thus centres on Saul’s attempts to find a Rabbi amongst the camp who will help bury the boy’s body and perform the Kaddish (a Jewish prayer). Consequently, Saul’s actions put the life of the other prisoners in danger, with his own personal mission played against the larger backdrop of a planned Sonderkommando that is about to unfold: for Sonderkommandos themselves live on borrowed time and therefore must flee before they too become victims of the gas chambers.

Son of Saul is an exceptionally powerful film that retains a constant state of menace and despair. Utilizing a style that is both intimate yet intense, Nemes skilfully uses both image and sound to recreate the experience of ‘life’ at Auschwitz, for the film is as much an assault on the ears as it is on the eyes. Rohrig is mesmerizing as Saul, delivering a perfectly understated performance. In the end we never do find out whether the boy was really his son, or whether this was just a psychological reaction to the situation Saul found himself in. Ultimately, it doesn’t matter. Rather, it is Saul’s unwavering determination to retain some form of humanity – even in a living hell like Auschwitz – that lifts the film to incredibly poignant heights.

Son of Saul is showing at the Glasgow Film Theatre and at Edinburgh Filmhouse until Thursday 12th May.