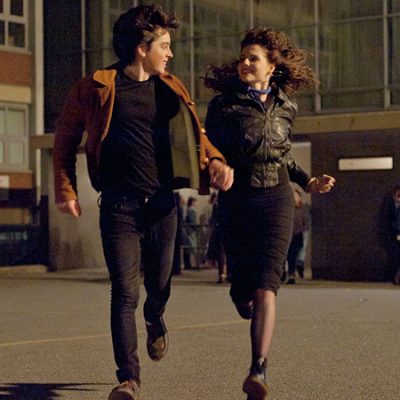 A popular critical fallacy is to suggest that certain directors only make one film. You’ll hear this levelled against Wes Anderson, Terrence Malick or basically anyone with a distinctive visual style and recurring preoccupations. With John Carney’s third feature, this rotten old chestnut is sure to be wheeled out carelessly by people who didn’t even like Once. Such an accusation is, almost without fail, an approach to cine-literacy that never moves past the surface levels of a film. Now, at first glance, Sing Street looks like John Carney up to his old tricks. Average people with moderately difficult lives and some kind of romantic or familial woes find redemption through making music. In Once it was a hoover repair man and an immigrant, in Begin Again it was a disillusioned A&R man and in Sing Street it’s a kid who’s been forced to move to a really rough school in ‘80s Dublin. He forms a band to woo a girl and finds escape through the music he creates with his new mates. It’s The Commitments meets Once.

If the claim were true that John Carney keeps making the same film, then it still wouldn’t matter as he keeps making exceptional pieces of cinema. Sing Street is the kind of film that keeps you smiling the whole way through while lacing it with enough melancholy to earn its triumphant emotional moments. From the riotous, truly great music to the gentle comic realism in its depiction of ‘80s Dublin, every note is hit perfectly. You won’t believe the instant quality of the band – no high school group has ever sounded this good – but you will believe in the people. Yes, Carney is still making low key musicals, but he does them so, so well.

Yet Carney brings so much that is new to the table, as well, so that he’s telling a new story in the same genre. Each film of his has had a different theme, and here he tackles one of the biggest in cinema: coming of age. In the lead character, nicknamed Cosmo, we see a mixture of all the confusions that a teenager might go through. Ferdia Walsh-Peelo captures universal experiences like the awkward approach to romance, the uncertainty around bickering parents and the use of humour as a coping mechanism. Framed against the failures of his older brother, played beautifully by Jack Reynor, Cosmo is both every teenager and also uniquely special. This is a fantasy set in the real world, about the childhoods that we all imagined or could have had.

People will describe Sing Street as a feel good film – some derisively – and it’s true. This film will make you feel exceptionally good. Unlike many films lumbered with that label, however, it earns that sensation through superb film making craft and by making you truly care.