They may be ambivalent to one another, but the Pixies’ music is still adored as the documentary charting their reunion reveals. By Alastair McKay 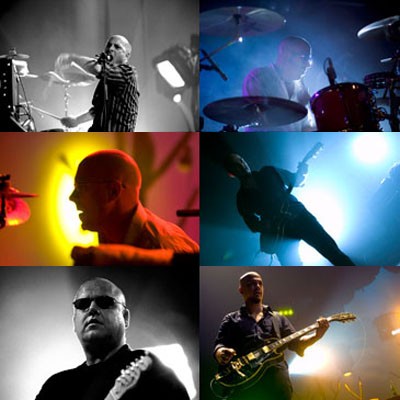 Pixies memory #1. Fifteen years ago, the Pixies played the SECC in Glasgow. The SECC is a big tin can with all the atmosphere of a diving bell, but that night the Pixies did something strange. They came, they played for maybe eight minutes, and they left. Something had collapsed – the safety barriers; the stage, the cracked carapace of grunge – and someone decided that it was too dangerous to continue.

But they achieved a lot in those eight minutes. The details of the songs they played escape me – maybe Debaser was in there – but I can remember the sound. It was fierce and loud and sharp, an ear-bleeding noise, like heartbeats thumping against the cochlea; brutal and melodic, but somewhere near pain. It was too much, really. They couldn’t have gone on like that. It was too dangerous to continue.

And so the Pixies split. They didn’t do it that night, but maybe they should have. Walking off a collapsing stage would have been a better way to go than what actually happened. In January 1993, Charles Thompson IV, then known as Frank Black, and previously as Black Francis, told Mark Radcliffe on Radio 5’s Hit The North that the Pixies were finished. Which, apparently, was news to the Pixies.

He later explained this decision to the NME, saying he had grown sick of the Pixies, and bored of singing Monkey Gone to Heaven. He needed new challenges. “It’s like a film-maker who’s started out making cowboy movies – after a while, if he were to be forced to only make cowboy movies, that doesn’t seem like a very good proposition. It seems it’s like it’s holding you down. And that’s the way I feel about it. I don’t wanna just make cowboy movies, I wanna try and see if I can make another kind of film.”

Pixies memory # 2. My friend, Gina Arnold – who wrote Route 666: On the Road to Nirvana – was talking recently to a class at Stanford University in San Francisco, and mentioned that she had once been on the road with a band in Europe. She didn’t name the group, assuming that the young students would not have heard of them. When she finally revealed that it was the Pixies, the class reacted as if she had witnessed a miracle, a feeling which intensified when Gina explained that the Pixies’ 1990 show in Vienna was the best live performance she ever saw, not excluding the Sex Pistols at the Winterland, Bruce at the Garden, or Nirvana at the Croc.

Gina didn’t bother with the Pixies reunion shows in 2004, as she didn’t want to sully the memory. In which case, she won’t need to seek out loudQUIETloud, the documentary of that tour, either. Here is what the Pixies were like when they toured in 1990. “Back then, the Pixies all loathed each other and sat on opposite sides of the bus. Kim [Deal, Pixies’ bassist] is a totally strange person. I loaned her my lipstick in Vienna and it was the first time she’d ever worn any. She covered grey in her hair with shoe black, and hated the Replacements cos she thought they were corny. She was fucking awesome!”

Plenty has happened to the Pixies in the years since they split, but the main thing was that, somehow, they became legendary. This was a neat trick, as none of the band died, but it could just be that the world has caught up with their music.

This film starts with the quote Kurt Cobain gave to Rolling Stone, trying to explain the magic of Smells Like Teen Spirit: “I was basically trying to rip off the Pixies.” Well, Smells Like Teen Spirit does have the loudQuietloud thing you get in a lot of the Pixies’ songs, but it really is a different animal. With Nirvana, the meaning was never obscure: it was all about pain and rage and self-disgust. Kurt’s was a loser’s refrain. Even now, it’s hard to say what the Pixies songs are about. The music is a kind of alien rock’n’roll. The ad placed by Thompson and guitarist Joey Santiago seeking band members asked for a “bassist into Husker Du and Peter, Paul and Mary” and they got Kim Deal, who as Arnold once noted, was like a cross between Keith Richards and Doris Day. The Pixies sound is all of those things mulched in a blender, with stray chunks of surf music and hardcore bursting breathlessly to the surface. The lyrics, meanwhile, are like fragments of B-movie screenplay, cut up by William Burroughs, then re-assembled by Herschell Gordon Lewis in the back of a comic shop.

Take the first lines of the song that Thompson grew so tired of singing: “There was a guy. An underwater guy who controlled the sea. Got killed by ten million pounds of sludge from New York and New Jersey. This monkey’s gone to heaven.”  Compared to that, Smells Like Teen Spirit is Summer Holiday.

The ad seeking band members asked for a bassist into Husker Du and Peter, Paul and Mary. They got Kim Deal, who was like a cross between Keith Richards and Doris Day.

So what happened to the Pixies? LoudQUIETloud starts with a Spinal Tap-style inventory. Thompson, as Frank Black, has maintained a solo career which has never quite matched the success of his previous identity. He has separated from his first wife, and teamed up with Violet, who has two kids. We see him taking delivery of a people carrier, and looking forward to a new baby. Joey Santiago also has a family, does a bit of soundtrack work, and plays to small audiences with his wife in The Martinis. Deal has had success with her sister Kelley in the Breeders, but is characterised by the film as a woman on the verge of a relapse into drug and alcohol abuse. Her mother is pleased that the Pixies have reformed, suggesting that otherwise, Kim would be “making snowflakes and doing all that crappy stuff, and sleeping all day.”

It falls to drummer David Lovering to provide the light relief. His introductory caption reads: “After the Pixies split, David gave up the drums to pursue hobbies including magic and metal detecting.” No doubt the chapeau shop would have followed if the Pixies had not regrouped.

What happens? The band gets together, and the film follows their progress from the first faltering rehearsals of Hey, to their triumphant final show. Along the way, Kim drinks at least one bottle of beer, consoling herself with the knowledge that it is only 5% proof, this being the alcohol content of most beer. (Thompson has stated that this aspect of the film was toned down, as Deal objected to her portrayal).

Lovering provides the main drama, as the stress of his father’s death prompts him to numb his feelings with Valium, causing considerable disturbance among the band. At a show in Iceland, he keeps drumming long after the song has finished, to the evident consternation of everyone. “I thought I was watching someone having a breakdown,” says Santiago, the George Harrison of the group.

Thompson, meanwhile, allows the cameras to observe him in various states of undress, which is brave for a big man, but not necessarily wise. In one peculiar scene, which is never explained, he clambers into his tour-bus bunk, wearing nothing but big pants, and plugs himself into a personal stereo. Soon, he is repeating a mantra, as if from a motivational tape: “I am a good person. I have a positive intellect. I can do it. People like me. I’m cute.” He then makes some throaty noises, whilst rubbing his bare chest, an odd moment of insecurity.

Thompson has criticised the film, saying that the filmmakers were naïve, and seemed to believe that being in a band would be similar to being in the Monkees: “Always up to mischief. But we’re boring, you know. And touring is boring. You just sit around not talking to each other.”

This may be true, but the film’s tension comes from observing the various ways in which the group members fail to communicate. In a phone interview with the NME, Thompson offers a glimpse into his understanding of the group dynamic. “We don’t talk to each other that much. And it’s not because we don’t like each other. It’s just the kind of people we are.”

The inability to penetrate those silences may be the film’s failure. On the other hand, the Pixies seem to exist in a state of nervous tension, with Thompson reluctant to admit that he needs his band-mates, and his band-mates unwilling to submit to his will. He clearly wants to write new songs as the Pixies, but he never quite manages to relay this information to his colleagues. Deal, at least, makes positive noises about recording together, but only to her sister, Kelley. On the disc of extras, Thompson suggests that, instead of making a record, they make a feature film. “Neat,” says Deal, while Santiago stares blankly through the windows of the bus.

And the music? Holy Jesus, it’s unfailingly, weirdly, great. There never was anything wrong with cowboy movies.