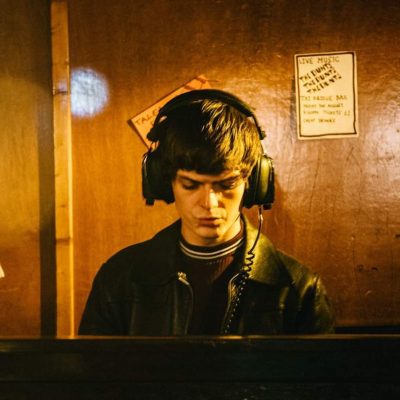 The music business is a cruel and shallow money trench, a long plastic hallway where thieves and pimps run free, and good men die like dogs. There’s also a negative side.”
This is the quote from Hunter S. Thompson which opens Schemers, an autobiographical slice of the purest Scottish comedy from Dave Mclean. As a sentiment, it doesn’t do justice to what is about to follow, and stranger still, Dave Mclean knows a hell of a lot more about the music industry than Hunter S. Thompson ever did, for all his alternate charms.

The story is told by the hero, writer and director himself, Dave Mclean. Young Davie (played brilliantly by Conor Berry) misses the opportunity to enter then Football Hall of Fame after a win on a horse spirals into his assault for getting off with the wrong young woman, and thereafter ― nimbly expressing the vagaries and weirdness of what it is to be young ― he turns to John Pilger for inspiration, and the documentary The Year Zero.
Although that doesn’t quite work out for him, it does blossom into a very funny joke later in the film, and Schemers ― proudly made in Dundee ― remains the story of how fate gave its young protagonist a boot up the arse, and follows Davie and his two best pals, Scot and John as they experiment with event promotion, in glorious youthful naivety.

The trio in fact began in real life by doing just this, and put on discos at first, in order for Davie to impress (we assume) a girl. This in turns leads to booking bands including The Skids, XTC, The Rezillos, Simple Minds and Thin Lizzy. As Davie went on to form Riverman Productions, who have notably managed Placebo for 25 years, among other acts, it feels like a fond and rambunctious homage to the promises and perils of youth. The scene which opens the rolling climax of the piece, in which Davie books Iron Maiden, is perfection.

The impressing of the young girl goes well, and for a while the feel is almost like Gregory’s Girl ― a young, lanky and slightly gauche loon, courting a girl he finds impossibly attractive. This romcom angle is superlative, as Young Davie attempts among other things to explain why Dundee has two football teams ― “It’s so we always have someone tae play with.” As it’s 1979 and Dundee, you might think the challenge would be to express what a hard era and a hard place it was, especially given that thanks to many cultural highs, the city on the Tay is nowadays on the rise. What’s shown instead is rampant gangsterism, a Thatcherism all of its own, and we need to accept on face value that every decent pub and venue in the city at the time was owned by a violent criminal. Dealing with the hefty crims, especially local king pin ‘Fergie’, played to a terrific tee by Alastair Thomson Mills, becomes the main challenge, and is more challenging than young Davie’s nascent gambling problem, his rocky love life, and the brutal life experience he gains running club nights.

The rest of the city is the declining backdrop that feels morose yet stoic over jute and whale oil ― and how the whale oil is essential to processing the jute ― something discussed as these industries flatly died. At least this is the case in the old timer young Davie runs up against, when he’s not managing the stress and debt of event promotion. The comedy is priceless, and infectiously Scottish. The theme is ‘Ye cannae help but wonder “Whit if?”’ Early on there’s a hospital scene so funny it made laugh for days.

It’s this humour that slides Schemers out of social realism into something much softer ― the HUNS RULE knuckle tattoos give away the identity of the local bully early on, but possibly my favourite line is near the end. Here, Davie mulls upon going to Cambodia ― to which his mother replies: “Cambodia? For a boy who got sunstroke goin tae the berries?”

Some of Scotland won’t even appreciate that joke, but fingers crossed the film travels. Simultaneous to its UK release, Schemers is being shown at the Mount Fuji-ATAMI film festival in Japan, and the Japanese subtitles must have taken some doing.

The humour is topical, and it is a very funny film. On a more serious note there are real questions lurking concerning the perils of gambling, which appears to be a genuine problem with Young Davie, and issues about bullying tactics in business, as opposed to the honesty of the entrepreneurial spirit ― which Davie has in plenty.

All three of the young men appear to have had that gusto in spades. John and Davie now have a record label, that has released music by Kyle Falconer. Scot meanwhile had a separately fascinating life as a property millionaire, who met a sad, untimely and unexplained death in 2014. Overall, Schemers expresses itself with the warmest, softest humour and remains philosophical about life: “Ye realise it’s just the cards you’re dealt by the Big Man upstairs.”