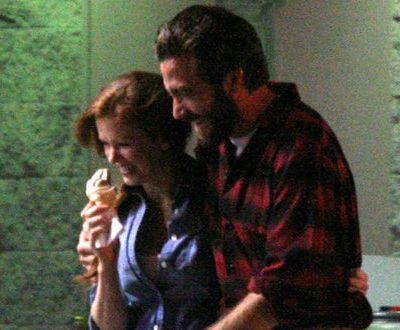 After a seven year absence following his 2009 directorial debut, A Single Man, fashion designer-turned-filmmaker Tom Ford returns with his second feature, Nocturnal Animals. As with his previous film, Ford has chosen to develop a literary adaptation, with Nocturnal Animals based on the 1993 novel Tony and Susan by American novelist Austin Wright. Part neo-noir, part-crime thriller, Nocturnal Animals features a multi-layered narrative consisting of three closely interconnected stories. Amy Adams is Susan Morrow; a privileged owner of a Los Angeles art gallery who, despite her professional success, finds herself constantly miserable and locked in a failing marriage to a man she knows is cheating on her. Whilst her current husband takes yet another unexpected business trip to New York, a dejected and alone Susan receives an unexpected delivery in the form of an unpublished manuscript for a novel – titled Nocturnal Animals – penned by her ex-husband Edward, seeking her opinion on what he’s written. As Susan begins to read, we’re visually presented with its story of the Hastings family who, whilst driving late one dark night along a desert highway in West Texas, suddenly find themselves run off the road and attacked by a group of red-neck youths. In what is, paradoxically, an intensely gripping yet difficult to watch sequence, a helpless Tony Hastings (Jake Gyllenhaal) sees his wife (Isla Fisher) and teenage daughter (Ellie Bamber) kidnapped, whilst he himself is abandoned in the middle of the desert and left to die. Somehow he is able to stumble his way to a nearby town, where he enlists the help of Detective Bobby Andes (Michael Shannon), who pursues Tony’s missing family and their kidnappers. Emotionally distressed at what she reads, Susan experiences multiple flashbacks of her relationship with Edward (also played by Gyllenhaal), a highly intelligent aspiring novelist from Texas, who Susan decides to marry despite her own mother’s defiant protestations that he’s too sensitive and lacks ambition. However, their marriage soon falls apart when Susan leaves Edward for her current husband.

What Ford has achieved here is nothing short of miraculous. As to be expected, Nocturnal Animals is an incredibly stylish film, with exquisite costume design and art direction, in addition to its stunning cinematography: the contrast between the cold and sterile world of Susan to the warm, gritty desert of Edward’s novel – highly reminiscent of the landscapes within Wim Wender’s 1984 classic Paris, Texas and the Coens’ Oscar-winning No Country for Old Men –  is masterfully captured by cinematographer Seamus McGarvey, whose night-time photography is undoubtedly among the best in the business today. Moreover, the musical score by Abel Korzeniowski perfectly complements the visuals and is reminiscent of those featured in such 1970 neo-noirs as Robert Altman’s The Long Goodbye and Roman Polanski’s Chinatown. However, the film’s sure strength is in its editing, which flawlessly intercuts between the three separate plotlines, subtly juxtaposing and connecting events through the use of graphic matches, and slowly building a complex multi-layered narrative that never feels cluttered or at odds with itself. The only excessive moment, one could argue, occurs at the very beginning wherein Ford presents the film’s title sequence over images of large naked women dancing in slow-motion. Although acting to immediately unsettle the viewer – and somewhat Lynchian in its execution – this sequence seems rather unnecessary and out-of-place with the events that follow. Despite a rather modest central performance from Amy Adams, who is given little to do other than look constantly miserable,  the film boasts several impressive performances, in particular from Gyllenhaal, Shannon and Aaron Taylor-Johnson who together steal the film whenever onscreen. Overall, Nocturnal Animals marks a stellar return to the director’s chair for Ford, who delivers a glossy, intelligent and compelling film which expertly deals with both memory and revenge. Not without its flaws, repeated viewings may be necessary to fully understand its subtle brilliance.