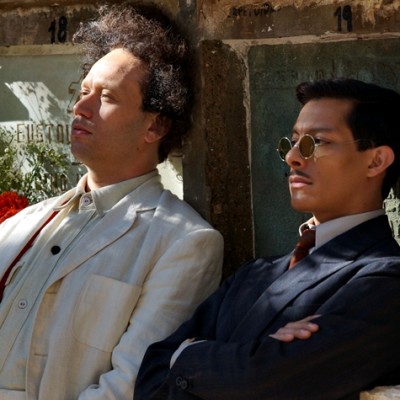 Midway through Peter Greenaway’s new film, the illustrious Soviet director Sergei Eisenstein is viewing rushes for his never-to-be-finished epic Que Viva Mexico! Much of the footage that survives from that project is hypnotic, almost mystical in its intensity. What we see here are light-hearted, even playful shots of the fictionalised Eisenstein (Elmer Bäck) clowning about with Jorge Palomino y Cañedo (Luis Alberti) his handsome and very obliging Mexican guide. Suddenly, Eisenstein’s two Russian assistants come bursting in. A mudslide has devastated a village on the outskirts of Guanajuato. “There are many dead, many injured,” the flunkies shout. “We should go there and film a natural Mexican disaster!” “Is there such a thing?” the great man asks archly. “Aren’t all disasters natural?” Well, no, in fact. Eisenstein in Guanajuato is proof that some disasters require immense premeditation and planning – and involve not one single free or spontaneous moment. Peter Greenaway has always been a director for whom ‘control freak’ was too light a term. In films like The Draughtsman’s Contract (1983) or The Cook, the Thief, His Wife and Her Lover (1989) that was not necessarily a drawback. Their characters used to copulate with a frequency a rabbit might envy – but the tone of those films was sexless and, indeed, soulless into the bargain. We viewed the sex in much the same way as we viewed the people who performed it, with a mixture of detachment and distaste.

For his new film, Greenaway has chosen not just a failed attempt to create a work of art. (That, if anything, should be something he can relate to.) He has also woven in a deeply apocryphal story of homosexual awakening. He asks us to believe that poor old Eisenstein – a Latvian Jew, born in Riga in 1898 – was still a virgin when he went to make his film in Mexico in 1931. Furthermore, that he experienced a blissful and life-changing interlude of buggery with the lusty Palomino y Cañedo. (That is Alberti with, I assume, an unfeasibly large plastic prosthesis.) It is all a bit like a remake of Luchino Visconti’s Death in Venice (1971) only the poor tormented artist actually does get laid.

No problem with any of this in theory, apart from the unparalleled folly of allowing Greenaway to direct it. There may be a colder, less erotic tale of sexual awakening than Eisenstein in Guanajuato.  If so, I have been lucky and missed it. As unromantic chat-up lines go, Palomino’s order to “Turn around!” rates very high (or very low) indeed. Without a kiss or a hint of foreplay, he plunges into Eisenstein’s “virginal Russian arse” (yes, most of the dialogue is like this) while thunder booms ominously outside. Did nobody to tell Greenaway this is not the way gay men normally start an evening? Once the maestro has been triumphantly deflowered, the two men rush out naked into the storm – waggling their bits up and down in the pouring rain. Improbably, no federales come to arrest them.

There has been predictable outrage in Vladimir Putin’s Russia over such wanton desecration of a national icon. One does wonder if the Russians take the trouble to watch Eisenstein’s films. Que Viva Mexico! was reconstructed in close-to-definitive form by Grigori Alexandrov (one of Eisenstein’s two assistants) in 1979. It had been available previously in truncated versions, Thunder over Mexico (1934) and Time in the Sun (1939). Whichever edit you choose, the imagery is frankly homoerotic, much of it verging on lurid S&M fantasy. Half-naked Mexican youths lounge languorously in hammocks or suck provocatively on giant cacti filled with milky juice. In the concluding section – which is optimistically titled “Revolution” – young men who rebel against a brutal landlord are buried up to their naked shoulders in blazing hot sand. Soldiers on horseback ride over them and trample them to death.

Clearly, the trick has not been to ‘out’ Eisenstein but to keep him safely ‘in’ for all these years. Greenaway peppers his film with pornographic gay cartoons – drawn, allegedly, by the master himself. But the love affair with Palomino y Cañedo is pure conjecture. We know he was a real person, a historian who lived from 1908 to 1994. (The year, approximately, of Greenaway’s last successful film). He served as guide to Eisenstein on his Mexican trip. Although he was married and a father, he was rumoured to have sex with men. Convincing films have been based on flimsier history than this, but these were made – invariably – by directors who could supply actors with vaguely actable lines. Here, on the point of being ravished, Eisenstein announces: “This is where I get off the train!” His lover grins roguishly and answers: “Your prick says you have a first-class ticket!” Faced with dialogue like this on a porn shoot, surely Rocco Siffredi would call his agent and demand a rewrite?

Visually, much of Eisenstein in Guanajuato is very pleasing. The Mexican colonial city is an almost insanely photogenic occasion, used previously in such Golden Age classics as Bugambilia (Emilio Fernández, 1945) and El (Luis Buñuel, 1953). The succulent Art Nouveau interiors were shot largely in Belgium and Finland. (This must be the first and only Dutch/Mexican/Finnish/Belgian co-production.) Eisenstein’s cavernous hotel room, with its lustrous glass-tiled floor, suggests that Greenaway has a bright future shooting travel promos. One could almost live in the gilded mirror-lined shower, where a delighted Eisenstein bathes his doughy Russian flesh. “We shall be cleansed,” he sighs blissfully, “in the hot water of the Revolution.” Alas, this particular revolution leaves me cold.