A new documentary about a key character in the story of the Edinburgh Festival gets lost in plodding self-importance, writes Victor Eaves 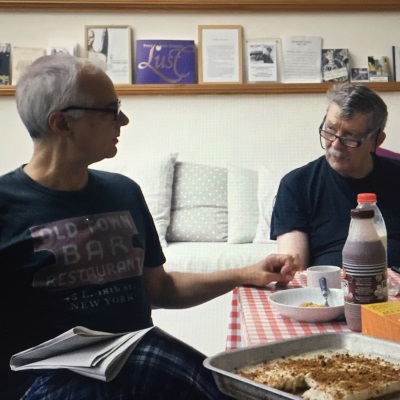 In the Edinburgh International Film Festival’s 72nd year, the programmers unveiled what they billed as a rich selection of Scottish films, filmmakers, acting talent and films shot in Scotland ― with Meeting Jim, a documentary study of Jim Haynes ― being a focal point. It might be a lesson for documentary filmmakers ― but just because your subject matter oozes fascination, interest and historical importance, it doesn’t automatically mean you are going to make a first-class film. Sometimes subjects can be so rich in material that what and who you do and don’t show becomes of the essence. Jim Haynes, an important figure in the British underground and counter-culture scene of the 1960s, was involved with the founding of Edinburgh’s Traverse Theatre, the paper International Times and the London Arts Lab in Drury Lane for experimental and mixed media work.

The movie isn’t necessarily about this, but covers it all dutifully, with Richard Demarco as the unofficial guide to this life and work. The movie is itself a festival of air kissing on one hand, and on the other, an example of how to live, as opposed to the portrait of a great man. A parade of aristos! And a gallery of individuals who consistently detract attention from the subject, by dint of their having very little of interest to say.

Other stars of the film include Jim’s address books. You have to see this bit above all, I feel. There is a filing cabinet drawer in Jim’s house, full of Jim’s address books. They’re proof perfect that Jim is the original social network ― as everybody and their beard is saying. What is fascinating is the way Jim Haynes scores out the dead people in these address books as he shows them to the camera operator. The address books are arranged by city, fat with tens of thousands of contacts, and are absolutely Jim’s objects par excellence. It’s great the way he scores people out of these books ― really great.

Richard Demarco is the figure who holds this documentary picture together, and thankfully he has preserved the physical and documentary evidence of Jim’s work. The early days of The Traverse are joyfully and beautifully explained, nay evoked. The 1962 International Writers’ Conference, likewise ― the 1963 International Drama Conference more so ―again, illustrated, and definitively. The reasons why the 64 International Poetry Conference was cancelled are also laid down clearly.

A ton of beatniks. Artists. The Jim Haynes Sunday atelier, in Paris ― where seemingly a generation of young travellers are wearing Jim and his friends out once a week. Namedropping. Networking. And although he lives in Paris, Edinburgh is very special to this story, and the great mark Jim Haynes has left on the city since arriving as an airman in 1956.

Meeting Jim is a story of dynamism in fact. The Paperback Bookshop in Edinburgh, open from 1959 to 1964, is truly evinced at last as important to Edinburgh’s civic and literary history and conjured up well, even if nobody can recall much about it. This said, nobody can really describe what Jim Haynes is, and although this remains a problem, it doesn’t stop them trying. Is he a 60s radical? A libertarian, or as here described, a happy anarchist? On The Arts Lab, Steven Berkoff says: “It was like a bird laying a nest. And we are looking for a nest. This was the Arts Lab.” Everyone has a go at defining Jim, and as a nest builder and facilitator, he seems to have made his mark.

At least in my opinion, Meeting Jim is in the final cut, not a very interesting film. Jim Haynes himself, while amiable, important even, has nothing of general consequence to say. More so, the participants, I’m afraid. Meeting Jim, the movie, vaunts the secret wants of a succession of upper-middle class society people, artists, wannabes and festival goers of a rather exclusive class, and with all these talking heads and an overall feeling of self-veneration, Meeting Jim might even be said to denigrate Jim Haynes exceptional reputation as a social mover and networker.

And it is networking which the film concentrates on. It would be impossible to make a film about Jim Haynes, agreed, without many people in it, because people are Jim Haynes’ thing.

And Jim Haynes says so himself ― he says his “favourite drug continues to be people.” Quite a few of the people he’s met are a bit dull on film though, so it’s a film that turned me on and off, hot and cold, as it veers from the interesting and staid historical foundations of Edinburgh’s now rampant festival and art world, to the egos that have taken all this social capital and sanitised, then monetised it.

At least we have these examples in Jim Haynes however ― dynamism, staying power and an entrepreneurial attitude the arts that may not have flourished in Scotland, had it not been imported from the USA.