An ambitious project to refashion abandoned film from the 1950s is totally beguiling, writes Alistair Braidwood 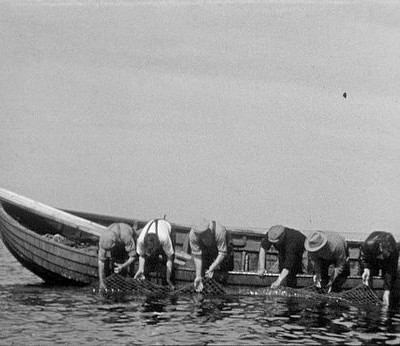 This year’s Glasgow Short Film Festival kicked off with the world premiere of Lost Treasure, a collaborative project featuring filmed footage from 1956 by the long disbanded Glasgow-based socialist filmmaking collective Dawn Cine Group, married to live music from Drew Wright (Wounded Knee) and Hamish Brown (Swimmer One). Commissioned by the festival, and using the editing skills of Finnish filmmaker Minttu Maari Mantynen, Lost Treasures is a fine example of how to make the most of meagre means with inventiveness, forethought, respect and great care. The result is something that is lyrical – you could even say magically realistic – and much more than the sum of its parts. The footage begins and ends in Glasgow, but the majority of it is set in Sutherland, and this juxtaposition between the urban and the rural is key as Scotland’s past is examined as well as the future. Music and poetry are of huge importance, with the work of Norman McCaig central, and songs and tunes from the regions seen on screen are used to soundtrack the images. What could have been a fractured mess has a cohesion and vision that is a tribute to everyone involved.

Wright and Brown’s accompaniment uses loops and repetition of voices, electronics and acoustics to help create a dreamlike atmosphere, and this mirrors the film where scenes are rewound and played over and over, reinforcing not only the themes and the beautiful footage, but allowing the audience to relax into the experience. In that sense it becomes as much art installation as a piece of cinema, but that is not to underplay it at all; there are narratives to follow, and questions asked.

The themes will be familiar to those who know the 7:84 Theatre Company’s The Cheviot, The Stag and The Black, Black Oil. These include the Highland Clearances, where people were removed from the area to make way for the more profitable sheep, the ownership and reform of the land, and the 20th century explosion of new technology and industry. A constant question is “How best to use the land?” and how the land endures, echoing that classic Scottish novel, (and recent film), Lewis Grassic Gibbons’ Sunset Song.

Other Scottish texts are evoked. Michael Powell’s 1936 film Edge Of The World and Neil Gunn’s novel The Silver Darlings set out the hardships of living in the northern-most places in Scotland, and the reliance on farming and fishing. Both the potato and the herring feature in Lost Treasure, but even here they are linked to the contemporary world with the industrial manufacture of food, the growth of take-aways, and the expansion of shopping after the austerity of the post-war years.

This is a time when peat is being replaced by electricity (there are scenes of the Dounereay nuclear power station being built), and the lines between city and country are beginning to blur. It’s only in the extremes that the differences remain profound, which the filmmakers obviously understood. If timing is everything perhaps they realised that the middle of such a century was the perfect vantage point to look forward as well as back, or perhaps that’s only apparent with hindsight.

The two leads, such as they are, would not look out of place on the cover of a Smiths’ album (see below). Theirs is a love story that can only be guessed at due to the sparse footage, but it gives a human and romantic aspect to the film, one which is unexpected, and this allows the audience to become more involved than they would otherwise be. The couple’s influence may appear slight, but they are our guides and as such we identify with them. 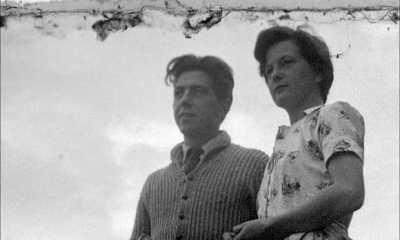 We can only imagine what the Dawn Cine Group intended for their film, although their politics and this evidence would suggest it was a critique as to how previous mistakes were being repeated, and at a quicker rate than ever before. Whatever the case, the results of this modern adaptation supports and enhances what’s on screen. There is nostalgia in evidence – how could it be otherwise? – but it avoids being overly sentimental and the way the footage has been used makes for an experience which is out of time and yet timeless.

Here’s an example of Drew Wright and Hamish Brown’s accompaniment:

Lost Treasure will be toured around the country as part of the CineScore Live tour, a season of three silent films, each accompanied by a specially-commissioned score performed live at venues across the country.

Full details can be found at www.filmhubscotland.com/cinescorelive, but here are Lost Treasure’s dates:

Tickets on sale soon at: http://thurso.merlincinemas.co.uk

In partnership with Lyth Arts Centre