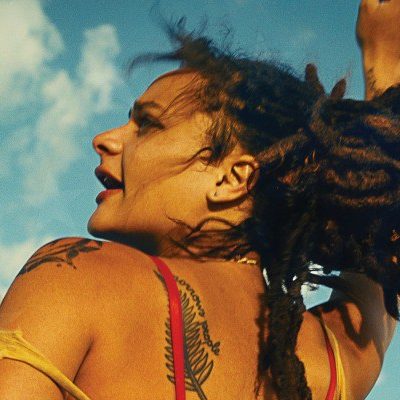 “She grew up on the side of the road

Where the church bells ring and strong love grows

So begins the 2010 country song by Lady Antebellum which lends its name to this latest film from British writer-director Andrea Arnold, whose previous work includes the highly revered and critically acclaimed films Red Road (2006) and Fish Tank (2009). Leaving behind the multi-storey flats of Glasgow and the council estates of East London, Arnold this time turns her attention to the so-called ‘Red States’, known for being the American heartland of conservative Republican and traditional Christian values. Within this environment, Arnold takes us along on a literal and metaphorical journey that at times truly feels like a contemporary cinematic successor to Jack Kerouac’s 1957 literary classic ‘On the Road’.

American Honey begins with our protagonist Star (Sasha Lane) searching through a garbage bin; a metaphor for this Texas girl’s position at the bottom of the barrel of American society. Star is only eighteen, yet finds herself as a surrogate mother to two young children whose drunken redneck father only sees her as housewife and sexual object. Whilst shopping at the local Kmart, Starr stumbles across a group of fellow teens who are passing through town on their way west to Kansas. They’re led by the charismatic Jake (Shia LaBeouf), with whom Starr immediately strikes up a connection and who invites her to come join the group selling magazines door-to-door. Tired and unhappy with her life, Starr decides she has nothing to lose and becomes the newest member of the mini-bus packed full of rambunctious and displaced youths travelling across the country in search of their own American dream. Along the way we learn more about Starr as she attempts to fit in with her new makeshift family of companions, and more importantly as her potential romance with Jake – whom we soon discover is subservient to Krystal (Riley Keough), the group leader who pockets most of the earnings and who takes an early disliking to Starr – begins to blossom.

American Honey is both a coming-of-age story of one young girl’s difficult progression into womanhood and a bitter social commentary on the failures of American capitalism. The film is raw and gritty in its portrayal of the hardships faced by this particular group of millennials, whose position at the bottom of society means they are victims of the myth of ‘trickle down economics’. They are a band of misfits forced together by circumstance, never bound to strike it rich selling magazine subscriptions in the modern digital age. Yet despite this, the group remains defiant and optimistic, revelling in their alcohol and drug infused youth. It’s within this environment that Starr discovers her true self: for despite her unwavering determination to succeed and prove herself strong on the outside, deep down she remains a vulnerable and benevolent soul who’s highly trusting of strangers, is quick to help vulnerable children, and who’s often seen interacting kindly with wild animals.

At the heart of the film is a mesmerising performance from debutant Sasha Lane, who provides Starr with a rich and natural honesty that immediately seizes the viewer’s attention and empathy. Arnold’s decision to cast newcomers in the majority of the roles lends the film an invaluable sense of authenticity and is reinforced by her decision to adopt a tightly-framed handheld aesthetic alongside the more confined 1.37:1 Academy aspect ratio she previously utilized on Fish Tank. Moreover, her excellent choice of songs for the accompanying soundtrack – ranging from hip-hop to Bruce Springsteen – serves perfectly as an additional layer of narration on top of the already stunning visuals.

However the film is not without its faults. Like life on the road, the film’s narrative is guilty of occasionally deviating off-route, and with a running time of 163 minutes it at times feels rather self-indulgent and somewhat repetitive towards the end – call me prudish but was there really a need for two overly-long sex sequences? Moreover, despite delivering an outstanding supporting performance, Shia LaBeouf is a highly familiar face which at times seems at odds with the more natural casting highlighted earlier and (during the odd moment or two) can take the viewer out of the film’s diegetic world. That said, American Honey is a stellar film which champions the free-spirted nature of this group of characters, yet offers a bleak and bittersweet view of their current circumstance and future prospects. The winner of the Prix du Jury at this year’s Cannes Film Festival, expect American Honey to accumulate more awards in the months ahead.