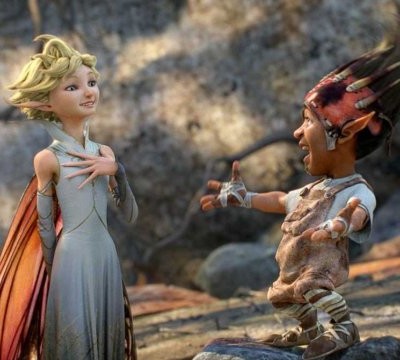 George Lucas, presumably with some time on his hands since passing on responsibility for Star Wars, has invested in passion projects. One of which, animated fantasy Strange Magic, is coming to cinemas very soon. If you’ve not heard of it that’s perhaps unsurprising, as the early word suggests this is definitely closer to Attack of the Clones than The Empire Strikes Back in terms of quality. Lucas produced it with Disney, and created the story, letting sound designer Gary Rydstrom direct the animated film. Its current box office is a paltry $12.5m domestically, from an estimated budget of $95m. Yikes. Yet, somehow, it has secured a UK release. So what is Strange Magic and where did it go wrong?

The aspect of the film that has attracted most critical ire is the fact that the film makers decided to include karaoke renditions of well known singles. This is an animated musical, but instead of writing something like ‘Let It Go’ they’ve opted instead for renditions of over 20 established hits that Justin Chang in Variety described as “ear-clogging.” Which, if true, is a shame considering the voice cast includes Elijah Kelley, who played Seaweed in Hairspray, Kristen Chenoweth of Wicked fame (almost like Idina Menzel in a certain recent Disney film) and Evan Rachel Wood, who has already proved she can do jukebox musicals in the brilliant Across the Universe. In spite of that cast, I’m still filled with dread at the thought of an animated musical with on-the-nose song choices – The Book of Life, which did the same thing badly, is still too fresh in the memory.

The next thing that went wrong was Disney’s marketing. Obviously this was never going to be one of their classics canon, but they still buried it without a trace. The world only became aware of the film’s existence two months before it was released, under their Touchstone label. Cartoon Brew suggest that the poor marketing and Disney’s reluctance to endorse it suggest that the film was part of contractual negotiations in the studio’s buy-out of Lucasfilm. Still, the film was released in over 3,000 cinemas in the US, making it a fairly wide release. When something like Ice Age 27 can bring families desperate for a distraction through the cinema doors with their hard-earned dollars, something else must be at play to account for the film’s no show at the box office.

It’s probably as simple as this: everything seems to suggest the film isn’t very good. I’ve not had the chance to watch it yet, so I will remain open-minded. However, every indicator suggests it won’t top Song of the Sea as my favourite animation of the year, or even rank above Minions. Currently sitting at 18% on Rotten Tomatoes, consensus hasn’t been kind to the film. Josh Spiegel, a writer always prepared to give animations a fair chance, says: “Strange Magic inspires a similar kind of wistful longing: for a time when animated films could convey complex messages clearly and subtly, and do so without looking like a frantic, manic nightmare.” Bilge Ebiri is a bit more positive, saying that it “for one shining moment … becomes something fascinating and sweet” but picks up on the strange mixture of tones and ideas “as if the whole thing were still in its planning stages.”

The saddest thing about all of this is that Lucas stated, in an interview for US TV, that he made the film for young girls. He wanted to make an adventure story like the ones he read to his daughters, and Strange Magic was the result. The bafflingly prevalent opinion in Hollywood is that you shouldn’t make movies for girls, and Lucas criticised that, saying that girls go to the cinema too. Strange Magic‘s bombing at the box office should not reinforce any stupid ideas about not making films for girls, yet it probably will. In reality, however, there was far more wrong with the film from the start than its target demographic. The response to Strange Magic’s failure should not be to only make films for boys, but to make better films.