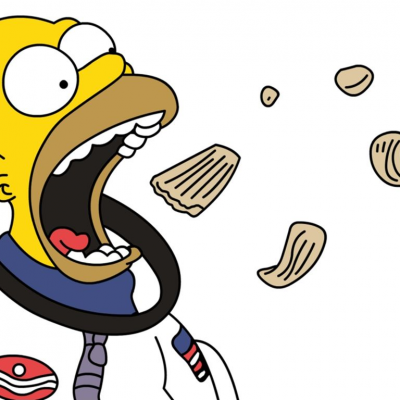 1. The Simpsons
In its absolute prime – by my reckoning seasons 3-10 – The Simpsons was the greatest comedy that television has ever produced. While today it is a pale reflection of a once-great show, we should never forget exactly how good it was. Relentlessly funny, endlessly quotable and featuring the best cast of secondary characters you will ever see in a sitcom, The Simpsons veered from the surreal to the cerebral with remarkable ease. Whereas today its pop culture references involve a famous character turning up and announcing their name, back then its homages and pastiches were effortless and unexpected, riffing on classic Hitchcock, sci-fi and forgotten episodes of the Twilight Zone. To show how long lasting its impact is, I need only say ‘who puts the Spring in Springfield’ and you’ll be singing along, or I’ll question your use of ’embiggen’ and you know exactly how to respond.

Best Episode: Deep Space Homer – almost impossible to decide but in the end this has some of my favourite jokes (I don’t understand, that was non-alcoholic champagne). In Rod we trust.

2. Avatar: The Legend of Aang
Also known by its US title, The Last Airbender, Nickolodeon’s fantasy show for kids was consistently surprising with how good it was. Over three seasons, Aang – the Avatar who must master control of all four elements – travelled four kingdoms with his friends and pet flying bison, while fighting off the evil dictatorship of the Fire Nation. There are so many impressive aspects of Avatar, from the thematic and ethical complexity that would be laced into the narratives of each season, to the incredibly choreographed action sequences where water, fire, air and earth were thrown at each other in martial arts inspired battles. Most of all, it creates a compelling, credible world which it then explores in roaming, often humorous episodes that give the amiable characters time to grow. The premise and intended demographic should not put you off, this is as good as fantasy on TV gets.

Best Episode: The Season 3 finale. – it’s rare for a series to end satisfyingly (just ask fans of Battlestar Galactica or Lost) yet somehow Avatar peaks with its four-part finale, with some of the best action and meatiest themes thrown in.

3. BoJack Horseman
A washed up TV star who also happens to be a horse is desperately searching for relevance and trying to work out what, if anything, he has to offer the world. It’s a strange premise for a strange show, set in a world where anthropomorphic animals live alongside humans and where a horse is one of TV’s most deeply written characters. Rarely have any comedies been able to walk the line between darkness and comedy so effectively. There is no empty shock value in the jokes about drug addiction and suicide; instead the considerable laughs are precisely balanced with a raw, honest look at depression and existential crises. As such, the comedy is every bit as effective as the emotional moments – something which came as a surprise after the fist few ineffective episodes. Season 2 has just been released on Netflix, and is equally upsetting and hilarious. Start watching now.

Best Episode: Downer Ending – BoJack, his flatmate Todd and the child star from his old show go on a drugs bender to try and finish his autobiography. Chaos and personal revelations ensue.

4. Adventure Time
Another kids show that has found an audience with discerning adults is this bizarro comedy from Cartoon Network. Beautifully animated with traditional hand drawn techniques in a childish, picture-book style, Adventure Time uses its medium and its genre – surreal fantasy – to create strange worlds, races of cloud people, ice wizards and goblins annoyed at their lot in life. The jokes and stories are off-beat and odd, which is what has drawn legions of fans to it who crave something a bit different. No two episodes are the same, and the broad, creatively realised world is populated with memorable characters, including my personal favourite Lumpy Space Princess. Not everyone will click with the wackiness of the world and the jokes, but for those who can move to its rhythm, Adventure Time is a subversive, silly treat.

Best Episode: Tree Trunks – An early episode in season 1 lets you know exactly what you are in for with an expedition into the woods to eat a crystal apple that ends in a totally unexpected way.

5. Creature Comforts
Aardman’s award winning program was built on a brilliantly simple idea: record the voices of the British public, talking about a range of topics, and then animate clay animals to their words. The result is a series of seemingly banal observations about existence brought to comical life, the topics matched to the settings that the animals are in. What really makes it work are the way certain kinds of voices fit their animals perfectly, such as a golden Labrador guide dog voiced by a perpetually enthusiastic woman who giggles a lot. As ever with the studio, there is also a wealth of hilarious background detail peppered throughout the interviews. Warm, funny and uniquely British.

Best Episode: Aliens – turns out the great British public have some pretty crazy ideas about extra-terrestrial life, as displayed brilliantly by a slug who is scared of abduction.