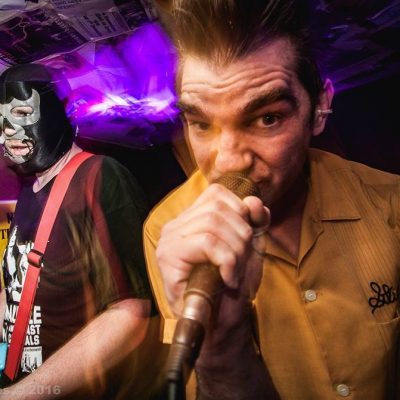 The labels of this vinyl only 45RPM 12” are a giveaway of sorts of what’s in store on this latest eight track opus from these Glasgow-sired purveyors of garage guitar rumble. On the A side is a close-up mug-shot of 7ft 4 inch French wrestler and long-time scourge of Hulk Hogan, Andre the Giant. On the flip, a drawing of a ghost-like masked Lucha Libre-style figure peers out. Such images act as the perfect trailer for a set of furious lo-fi growlers recorded in one afternoon by a larger than life and potentially dangerous crew of cartoon superheroes. The hyped-up quartet’s onstage image of wrestling masks and German army helmets resurrect the sort of pantomime outrage of 1960s schlock-meister Screaming Lord Sutch and trash-psych merchants The Mummies. Bassist Kyle Thunder, guitar man Handsome Al, drum beater extraordinaire Shug and plinky-plonky keyboardist Pete – just Pete – keep their secret identities close to their chests.

So it goes for more than a decade of WWE inspired rock-and-rage, from the 2006 Vote for Jesus six-track through a slew of releases to 2014’s Under the Underground album. Somewhere along the way, the fantastic four managed to found Buckfest, a now annual indoor festival which has taken up residence in assorted Glasgow cellar bars.

For those not well-versed in the mythological drinking habits of the Scottish West Coast male, the band’s name, refers to the excitable short-term side-effects of the much loved brand of fortified wine brewed by monks.

The transcendental effects of necking such a brew are well documented. The following should act as a guide to listeners of a nervous or tea-total disposition, and should be treated with caution.

The record kicks off with Nine Stone Cowboy, a song awash with fuzz guitar repetition, sci-fi synths and a rocket-size countdown. Topped off with a vocal melody that’s a dead ringer for Buddy and Cathy Rich’s big band version of Sonny and Cher’s The Beat Goes On, it blasts off into orbit with a clatter. Dr Dre USA  sounds like Fiery Jack-era Fall siphoned through psycho-billy yowling and recorded in what sounds like a shed where the band are hollering through a mattress.

Down A Hole sees our heroes crash back down to earth with a vintage strut and an out of tune Woolworths keyboard not heard since Live at the Witch Trials and excavated from a skip. Closing the Andre the Giant side, the pounding jungle drums, echo-laden vocals and primitive synth stabs of Chewing Gum sound like Suicide reborn with menace before collapsing into an end of groove goof-off.

Over on the Lucha Libre side, Hippy Shit sees the band come swaggering in from the crypt like a leather-jacketed gang taking on the stragglers of retro-styled youth cults with a call to arms that should set the long-hairs running for the hills. The final three heartbreakers sound like excerpts from a delinquent-studded rock and roll musical that might well be the anti-Grease. I Don’t Care (That You Don’t Care) is a bratty two-fingers to the stuck-up madam who just ditched the leader of the gang (no, not that one). F.Y.I. Luv U is a last dance at-the-hop declaration that confesses all with a classic 1960s Brit-beat vocal. Finally, Let Her Know hangs tough once more as the grand finale to a teenage dream which, as the real Bucky rage subsides, remains wild at heart and weird on top.