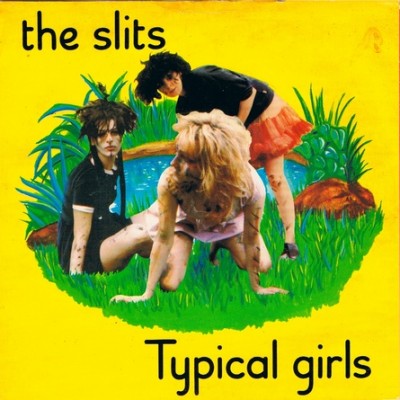 A few years ago I worked in a Glasgow restaurant, and we always brought in music to play, share and to try and impress each other with. Someone arrived on shift one day with the TRASH Companion #1 compilation, and said there was one song we had to listen to. He then played The Slits iconic version of ‘I Heard It Through The Grapevine’, and asked if anyone knew who they were. Appalled by this, as only a music obsessive can be, I went to FOPP on my lunch hour and on my return presented him with a copy of ‘Cut’, the band’s debut album. “Why are they naked and covered in mud?” was the first question. I told him that was only a tiny part of the story.

The Slits were one of the best and most influential bands to emerge kicking and screaming from the UK Punk movement of the late 1970s, even if some of those influenced don’t know it. If Punks were outsiders, then this all woman band were the outsiders amongst the outsiders, with only Siouxsie Sioux, Gaye Advert, Pauline Murray and Poly Styrene challenging them for status and presence as the foremost female on stage role models (with honourable mentions for The Raincoats and The Rezillos’ Fay Fife).

The Slits were there from the beginning, going to the legendary gigs at The Roxy and The 100 Club, hanging out with the legendary bands including The Sex Pistols and The Clash, and eventually forming their own. At their front they had the teenage volcano who was singer Ari Up, but for many the most enduring feature of the band was the unique guitar sound of Viv Albertine, without whom I would argue there would have been no Riot Grrl, Liz Phair, PJ Harvey or St Vincent, to name just a few, at least not as we know them.

Albertine’s recently published autobiography ‘Clothes Clothes Clothes, Music Music Music, Boys Boys Boys’, fills in much of the untold story behind the band and the Punk landscape of that time, but it is so much more. When Product spoke to her recently she was keen to outline just what those years were like for a woman to be Punk.

“To be a punk in the late ‘70s was dangerous. To be a woman in punk was more so. Punk was political, from the clothes, the music, even the way we walked. The threat of violence, on the street but also between audiences and bands, was never far away. It was them against us. We were like aliens. People didn’t treat us like women because we didn’t look like women, in their eyes. This was thanks, in part, to the inspiration of Vivienne Westwood and the clothes she and Malcolm (McLaren) sold in their shop, SEX. To be a girl and wear a ‘tits t-shirt’ (one of Westwood’s most iconic designs) was to take what much of society had reduced you to and put it in their face. We were walking performance art, walking confrontations.”

“But even within that scene, although we were accepted to hang out with, I’m not sure we were ever taken as seriously by other bands as we should have been. This was partly down to Ari being only 14 when we began, but no one could deny that she was an amazing front person – extraordinary. It was just hard at times having someone so young, with such little life experience, as the de facto spokesperson of the band, but the singer was who the journalists most wanted to talk to. As a result we had to fight doubly hard to be taken seriously.”

“We were under the cosh of a very limited choice of female stereotypes, where at least now, in terms of music, women have greater choices as to what they want to aspire to. We were busy chipping away at that. We expressed ourselves through our music, and not in a clichéd way. We were determined and strict. We questioned each other and questioned each note, noise and sound. That’s what I feel about music; you have to live it as well as play it, otherwise what’s the point?”

To be a girl and wear a tits t-shirt was to take what society had reduced you to and put it in their faces.

This seems to dispel the myth that Punk musicians couldn’t play – something Albertine makes clear was not necessarily the case. Rather they chose to play in a different way. “Traditional rock music was corny. We thought very carefully about what we played, and what we left out. We were determined to avoid cliché and the music was carefully crafted and structured as a result. Just because you can play it, doesn’t mean you should.

“And even those who weren’t virtuoso musicians could make a positive from that. We could approach instruments and music afresh. I listen back and I can’t believe that The Slits sounded like we did, because girls weren’t supposed to express that sort of energy in those days. This was something new. Punk was about fresh approaches and new ideas, and we embodied that, and that’s something I still carry today. When writing the book – I had never done that before and I applied the same principles, the same ruthless rules as I do making music. It had to be about the book rather than what my ego needed, or what other people expected.”

Talk of writing the book brings us to the second period of creativity in Albertine’s life, a time which, amongst other things, was sparked off by the almost surreal intervention of actor and filmmaker Vincent Gallo. “My friends were too respectful to push me to be creative. I had been ill and was working at my marriage and family life. It had to be someone else who intervened; someone I didn’t know but who had done something with their life that I respected. I was fascinated by Vincent and how he had chosen to live.

“I thought my life was over, and I didn’t think about creating any more. I was a mum, at a certain age, and that was fine. Vincent assumed that I was still an artist. His belief in me was inspirational and at just the right time. He had been influenced by me when he was young and it was as if he was giving it back to me. He had seen The Slits play in a New York club and had not only bought into the whole Punk ideal, he had continued to live it. He does things on his own terms, and not for money. If it’s not working for him, he walks away.

“When I started playing music again I felt that my life had come full circle. Once more I had to ask, “Where were the role models?” – the middle aged women in rock who were getting on stage. At 53 I was launching myself as a new artist with even less support than before.”

She started playing gigs again, and in 2012 released a new album, ‘The Vermilion Border’. In a sense, this was more radical than being in The Slits. “I agree. The stereotypes are even more prescribed at that age. I had friends and family telling me not to do it, and that I couldn’t do it. They suggested I was mad and thought it was embarrassing. It was embarrassing. But you have to risk embarrassment to succeed. You have to fail without any certainty that you will ever succeed. But, with the spark from Vincent, I felt that this was the right time. Such opportunities do come along, but you have to be open to grabbing them. I thought, “I’m not going to die, I’m going to give it a shot”.”

The prospect of death is one that has been all too real in Albertine’s life, something she pulls no punches about in the book. She sets out that from a young age she felt in some way betrayed by her body, that it would let her down. Some of the most memorable scenes are of Albertine learning about herself, and overcoming the pressures women have put upon them every day, by society and what it considers normal.

“Women’s bodies go wrong a lot, everything in there is complex and so close to each other, and it does have to be looked after. An example is my first trip to the gynaecologist which felt like he was going to look under the bonnet as if I was in for an MOT. It was one of the most humiliating moments of my life. I was innocent and no one had warned me about this. I had never had my legs open for anyone at that point, let alone a stranger and I was mortified; something which has stayed with me to this day. It wasn’t just that incident, but that was an example of the way women’s bodies were treated in the ‘70s. There was a mindset that men could grab it, and take it, and touch it, and laugh about it whenever they wanted. This was deemed acceptable, as we are now only too aware. Of course, times may be less innocent today, but that’s not necessarily an improvement, just different, as young women have other, perhaps more dangerous, expectations and pressures to deal with, particularly with regard to sex.”

You may think that surviving serious illness would lend a feeling that life is too short? This was not the case, at least initially.

“No, the opposite. It didn’t give me strength at the time. It made me feel fragile, vulnerable and terrified. And disappointed in myself. My life is so different now. I’m such a different person. I feel I’m on a roll, and something new is happening every day. For years I couldn’t speak because I had nothing to say. Too often people write, paint or make music when they have nothing to say, they do so because it becomes an obligation. I have never felt that. Now it was my time once more. What I began to do, once I started creating again, was to learn to feed myself. I didn’t need someone outside to spur me on. I realised I didn’t, and I don’t, need a muse any more.”

‘Clothes Clothes Clothes, Music Music Music, Boys Boys Boys’ is not just for music lovers and cultural historians, it has something to recommend it to everyone. While you may not have spent your early twenties in a seminal Punk band, Viv Albertine portrays a life which you will recognise at least in part.

Many readers, like me, will have been drawn to the book wanting to know more about those early years of the Punk scene and the story of The Slits, but the more memorable and moving moments are those that come later. The scenes of fractured domesticity, relationships, illness, tragedy and triumph which will have you laughing and crying, often within the same page. And if you don’t own one already, do yourself a favour, get a copy of ‘Cut’. Then you’ll know that every claim made above for the legacy of Viv Albertine is not only true, but richly deserved.