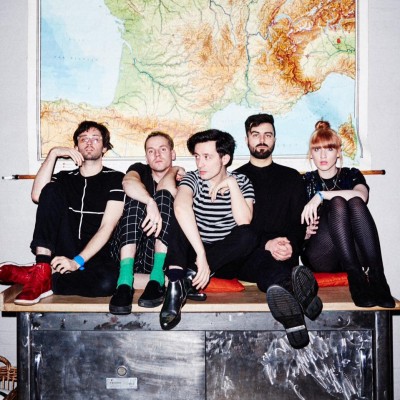 WHITE know a thing or two about putting on a show. This should become instantly clear to anyone who puts on their glad-rags and shimmies on down to one of the dates on the Glasgow-sired quintet’s first full tour, which opened last week. As they hit the floor to grandiose Sensurround pop epics such as Future Pleasures, Living Fiction and Private Lives, pleasure seekers of all ages will be taken, not just by the gloss, drama and glam-o-rama of the songs themselves, but also by the shape-throwing bravura of frontman Leo Condie. As he leaps into action, hair flopping, arms akimbo, you get the impression that Condie has been rehearsing this moment for years. With a consciously voguish sound that mines the entryist New Pop of early 1980s forebears such as Paul Haig and The Associates, it’s as easy to see where WHITE are coming from as it is to see the scale of their ambition.

“Before we launched the band,” says Condie, who formed White with guitarists Hamish Fingland and Chris Potter and bassist Lewis Andrew before drafting in drummer Kirstin Lynn “we really thought about what style we wanted to be, right down to the name and the logo, and the colour palette we used. In terms of getting the sound of the band, we always knew we wanted it to be a mix of post-punk, but we also wanted it to sound more up to date and have a clubby feel to it. In a way that was making a statement. We wanted to sound like a really hot club.”

For sure, WHITE’s sound is a jump-cutting bloodrush of amyl-nitrate fired euphoria in neon-lit rooms where schemes and dreams are hatched. The sorts of places, then, where Condie and co might well have plotted world domination behind closed doors.

“We spent six months developing the band without telling anyone,” says Condie. “We wanted to make sure we had the whole thing ready to go so we could appear out of nowhere. I’ve been saying that we wanted to look like we’d come from space. I don’t know if that’s calculated, but it left us enough room to develop in private.”

When WHITE did finally beam down in 2014, they were signed to the suitably big-league RCA records, once home to the late David Bowie among others. On a succession of rapid-fire singles, Blush, Future Pleasures and the newly released Living Fiction, WHITE’s machine-age (yes) white funk sheen and sci-fi synth panoramas sounded fully formed.

In truth, prior to honing WHITE’s aural manifesto behind closed doors, all five band members did their musical growing up in public. Lynn played with Garden of Elks, while Fingland, Potter and Andrew formed the backbone of folk-rock traditionalists, Kassidy, who reached a natural impasse after singer Barrie-James O’Neill decamped to LA to be with his then girlfriend, Lana Del Rey.

In search of collaborators, Fingland hooked up with Condie, who had spent several years as singer with The Low Miffs. Formed with friends from music school, The Low Miffs mixed art-rock angularism and vocal melodrama, and recorded an album with Malcolm Ross, the former Josef K and Orange Juice guitar genius who became a mentor figure for Condie.

With Ross musical director on Sylvain Chomet’s Edinburgh-set animated feature film, The Illusionist (co-produced by Fast Product records co-founder Bob Last), Condie was drafted in to provide the singing voice for imaginary band, The Britoons. With The Low Miffs on hiatus, Condie did solo shows of work by Brecht and Brel, both theatrical songwriters whose work has been explored by iconic drama queens such as Scott Walker and David Bowie. All of which has clearly fed into WHITE, albeit without some of Condie’s former band’s more consciously eccentric moments.

“This is light years away from what I was doing before,” he says. “I’m making a conscious effort to not be quite so muso-ey as The Low Miffs were. It was natural we were muso-ey, because we were music students, but I look back at some of things we did and I think, what the fuck? Malcolm tempered that, and I do really like pop music, and with WHITE try and not be too clever.”

Condie’s flamboyance onstage, however, remains. “I’ve not toned it down,” he says, “but it’s maybe not quite as eccentric as before. But I can’t really hide that influence, and I don’t want to. I think some singers are scared of performing, but it’s not to be sniffed at. A lot of frontmen in groups want to be seen to be authentic, but I think that whole thing about authenticity is very calculated, but people sometimes don’t really get that it takes a lot of rehearsing to appear authentic.”

Authenticity doesn’t become WHITE in this way, and while archness is something Condie left behind with The Low Miffs, a fabulous sense of WHITE’s own constructed artifice is paramount in everything they do. In this respect, both musically and stylistically they owe as much to Roxy Music as they do to The Associates.

“I think we want to be a bit magpie about what we do,” Condie says of WHITE’s retro-future chic. “That whole era in the 1980s is ripe for a comeback. Music is very monochromatic just now, but you can turn heads just by dressing colourfully and making music that’s just as colourful.”

Jumping into bed with major label too sounds as old school colourful as it gets, and in this respect WHITE could have leapt out of a scene from Vinyl, HBO’s Martin Scorsese/Mick Jagger-backed TV reimagining of 1970s New York.

“The good side of it,” Condie says of being on a major label, “is that they have a lot of good contacts and really look out for you. I know from people that a lot of them don’t have the contacts or the clout, but we’re really lucky. The people at RCA get us, and have a really focused idea of what WHITE is.”

WHITE never meant to be on the same label as David Bowie, but that too seems to fit in with the band’s grand plan, as did the scheduled release of Living Fiction the same week as what turned out to be Bowie’s final album, Lazarus. Bowie’s untimely death, however, was not in the blueprint.

“Bowie was a massive influence on me,” Condie says. “The first song I ever sang live was Quicksand, off Hunky Dory, which I did at my school rock night. When I was young I didn’t listen to anything except The Beatles up until I was thirteen. Then I saw Bowie on television, and that opened up a whole new world for me. Because he was such a prolific collaborator, listening to Bowie led me to Eno and Lou Reed, and then to everyone they worked with. Bowie was the key that unlocked music for me, and made me want to properly become a musician. I wanted to be David Bowie.”

Condie wasn’t alone, as he discovered after talking to Wild Swans vocalist Paul Simpson, who Condie had met at the wedding of Wah! frontman Pete Wylie. As with many key players in Liverpool’s post-punk scene that co-existed with kindred spirits in Glasgow and Edinburgh, Simpson had channelled his Bowie fixation into forming his own band, just as Condie had.

“It was really interesting speaking to people like Paul who’d been in bands in the 1980s, and who’d had that exact same experience and been through the same set of albums.”

With Bowie such a crucial influence, and with their own album ongoing, Condie has no intention of letting WHITE get stuck in a one-dimensional rut. “One song is very clubby,” he says, “but another one that we’ve got is a slow ballad, so who knows what might happen. We want to constantly expand our range, and establish early on that we can do more than one thing so we don’t have to keep reinventing ourselves every time.

“Eventually I’d like to put on a big show, with lots of movement and lots of colour. We’re in a pop band, not The Kronos Quartet. We want to get as big as possible without compromising. The sky’s the limit.”