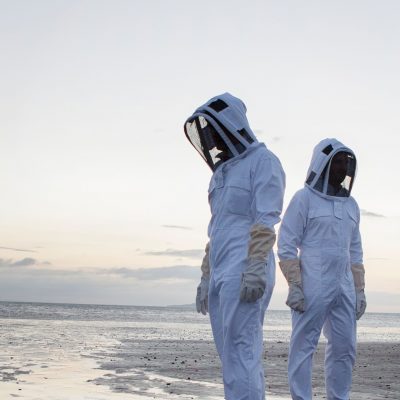 Oliver Kass is the charismatic frontman of electro-glam rockers Future Get Down. Despite a mystifyingly muted critical reception, the ‘Get Down’s 2020 debut album Here We Go Wonder is a copper-bottomed future classic which rewards the listener with repeated spins. Much like the initially under-appreciated Velvets’ banana album or Beefheart’s Trout Mask Replica, it’s an assured and sophisticated set whose audience will only grow. Throw in their vividly theatrical live shows and we have an eccentric and original presence in an often workaday Scottish indie scene. Kass first came to notice alongside fellow ‘Get Down collaborator Ally Dennis in synth-pop outfit Homework during the Teens, and he still finds full expression for his purely electronic muse with glitchy solo act El Ghoul. Whether as edgy producer or enigmatic yet compelling stage presence, Oliver Kass is a talent to watch.

I’ve been quite obsessed with this song in the last six months or so. My kids love it too. I can currently pied-piper them into the kitchen from any corner of the house using either this track, ‘AM 180’, ‘Fisherman’s Blues’ or ‘Sally Maclennane. I first came across it at the end of Wes Anderson’s Fantastic Mr. Fox, one of the greatest films ever made. All the animals are finally resigned to their new fate of a lifetime underground but discover they have access to a supermarket through their tunnels. Yeah, we ain’t gonna get much fresh air but we’ve got a plenty of food, so let’s dance…It’s lightning in a bottle stuff on the recording. Two and half minutes of magic. Like someone’s kicked a Buddy Holly hit through the Beach Boys and the wall of sound. There’s a wee bit of underlying darkness and sadness in there too but somehow it stays just enough under the radar to keep it interesting. This track didn’t even make the top 100 in the US when it was released in 1965. Bobby Fuller died in “mysterious” circumstances at the age of just 23 a few months later. He never really even got going.

I don’t really know what to say about The Phantom Band without digging over well worn arguments about the injustices of the music industry and giving myself a savage bout of tension headaches in the process. When a band is this good so early, it’s both a blessing and curse. I just wish they were still making music. I saw them live maybe five or six or six times. I loved them very much. When this starts opening up at around a minute in and the guitar lines start descending in unison through both my conscious and subconscious…. there has to be some voodoo in there. It’s a shot of uncut endorphins in the back of the neck. There are so many little touches of class in the recording too. Like when he’s half whooping for joy, half pushing the band deeper into the rabbit hole. The vocals are pushed back at this point. Buried treasure.

A friend sent me this edit a couple of months back and it’s led me down a few interesting paths since. What struck me at first were the comments on the video. So many people connecting the track with the fragility of life and leaving:“this is a farewell song”. “My best friend is dying in hospital right now. I gave him the link to the song so he could drift away with the angels.” Like all the great gut punchers, this one soundtracks a fair few films too. It led me into watching ‘The End of the Tour and then reading the book it was based on. I will shortly embark on Infinite Jest. I may be some time in the mind of David Foster Wallace. Music needs both danger and fragility. Make the tech sound human – I’m with Brian on this one. Do what you need to do to make that happen. Don’t overthink it.

Emily is mind-blowing in scope and structure. I mean, it’s twelve mins long. I think to write, perform and record something like this takes a vision, talent and confidence that very few people possess. If you don’t like it on first listen, try again (and again). Once you’ve cracked it, maybe you can write to me to tell me how they got the strings to fit around the harp and vocals.

The Rapture, House of Jealous Lovers

Right, you see if this came out tomorrow, or in any decade for that matter, folk would have had no choice but to sit up and listen. James Murphy and Tim Goldsworthy conjured up something very very special with this production. So much energy. I love the fact that they had to persuade the band and Sub Pop to actually let them release it. Allegedly, Luke Jenner thought it sounded “unfinished”… then it was DFA’s best selling single. I can’t remember where I first heard it but I still have images burnt on my retinas of a number of my friends’ faces screaming the deranged vocal lines at me as it was all kicking off in darkened rooms. I also remember persuading another friend to see them at T in the Park based purely on the premise that it would be dance music + guitars. They were superb live too. A few hours later we were lost to My Private Psychedelic Reel and Adam Smith’s clown in the Slam Tent.