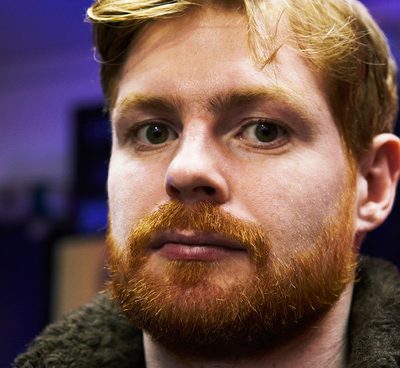 Fifer Dave Maclean is the drummer and driving force behind neo-psyche art poppers Django Django, who rocketed to fame with their self-titled debut set in 2012. MacLean and frontman Vincent Neff co-author the band’s rhythmically complex grooves. Even in the thick of their super-tight live shows, he’s wont to produce interesting percussion instruments to accent the group’s rich analogue/electronic maximalist funk. The Djangos formed in 2009 but Maclean was already steeped in the underground sounds that helped shape the band’s erudite sonic palette. His brother John was a founder member of seminal millennials The Beta Band, while Dave was already djing the New York house and hip hop that are his first love. His affinity with electronic dance music continues to inform their sound, and he’s now producing house tracks under his Hugo Paris DJ moniker. The lush garage of curtain raiser Music Saves The World, featuring NYC vocalist Roland Clark, dropped last summer.

I was really into the Beatles and ’60s music until I bought Fear of a Black Planet on cassette from Our Price in Dundee. It was my entry point into the world of hip-hop and eventually dance music. This track is just one of their heaviest tracks and on of my favourites from their back catalogue.

My brother had some 808 State records that I’d borrow when he was out the house. I was intrigued by electronic dance music but there was so much crap in the charts in the ‘80s and early ’90s ripping off underground Chicago and New York house records that I was sceptical. I think it took a while for me to fully appreciate this track but once I got it, it became a firm favourite and a kind of Holy Grail 12 inch production wise in the way that I think of Blue Monday or I Feel Love.

The Beatles were certainly my most constant obsession in music growing up. In terms of production, I’d pick apart their records in my head and try to imagine what the hell was going on. This track especially. I used to play it when I was djing in Hip Hop sets, mixing a DJ Food track over the top and it sounded so modern (in 1995). Also Ringo needs more respect as a drummer.

John would bring home demo tapes of Beta Band sessions and it was always exciting to hear what they’d been up to. I remember sticking this tape on and having a bath and just thinking ‘wow’ this track and Push it Out I was really blown away by at the time.

Not a song in particular but my dad used to play a lot of folk guitar in our house and I loved to listen to it. He’d make a lot of songs up and play folk songs from memory. I think it was really a big influence on me and my brother growing up as well as taking records for their collection like Pink Floyd and The Stones. It was quite a musical household.

Django Django’s fourth album Glowing In The Dark is out now on Because Records.