Sarah Busby on innocence, idealism and her first love: the Psychedelic Furs 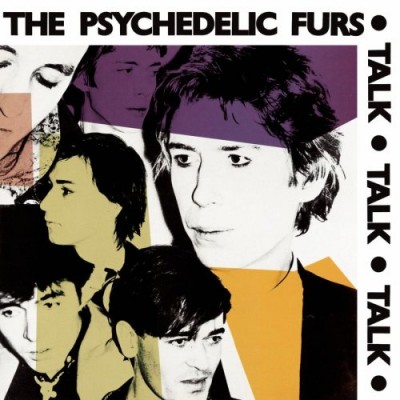 When I heard the Psychedelic Furs were playing live again it awoke something in me long thought dead: a passionate idealism from a time when I immersed myself totally and joyfully in music – the sounds, lyrics, and textures, when even record covers were weighed up with great care and semi-religious seriousness. It was the cover of Talk Talk Talk, the Furs’ majestic second album that hooked me. At a damp squib of a party sometime in 1981 I nonchalantly flicked through the record collection of the uncool hostess, expecting to find disco, soft rock or – worst of all – the albums that everyone had. But there was Dexy’s, Stray Cats, Comsat Angels, all quite promising. Bowie’s Low, alluded to some kind of far-off art school chic which I couldn’t quite process. But what was this with the splashes of purple and gold, the modernist font and the guy with the killer cheekbones? Psychedelic… Furs: the name sounded esoteric, exotic and contained a whiff of sex – just about everything an adolescent might be after.

At this point I have to put down my knitting, take off my horn-rimmed glasses and gently remind younger readers that album cover art mattered a great deal in those days. MTV was five years away, the internet at least 15 and the only music on television was the weekly half hour Thursday night edition of Top of the Pops, whose name seemed normal then but now sounds like something from before the Industrial Revolution.

Uncool Hostess wouldn’t lend me the album. She wouldn’t play it either, because her older sister would somehow get wind of this and wring her neck. But on Monday morning at first break she slipped me a cassette with “You know what this is!!!” scrawled on the soft cardboard cover. I did. It was.

The album opened up a new world to me musically. I had never heard the Velvet Underground or Bob Dylan, let alone Captain Beefheart. Though released in 1979, my introduction to Unknown Pleasures was still a few months away. My most out-there musical references were Peter Gabriel, OMD and local heroes Josef K, of whom I was loftily proud.

So Talk Talk Talk was like diving into a dangerous new world of beguilingly-weird song structure, stark poetry lobbed in amongst guitars by turns hardly there and exhilaratingly in-your-face, all haunted by a wayward sax player sulking somewhere on the roof. There were simple, beautiful melancholic acoustic guitar pieces interlaced with chopping rock chords, and some sort of percussive sorcery which seemed to conjure the moment a raindrop falls from a fern deep in the forest. The bassist rather casually made the repetition of one note sound like the most blissed out, celestial sound ever committed to vinyl.

Each time I returned to the album there was some trick or twist I had missed. And the lyrics! Someone’s hipster big brother (or youngish uncle, I can’t remember) found me in the pub, pint of Snakebite in hand, babbling about the Furs’ lyrical brilliance. “Yes, they are rather good” he sniffed. “It’s textual cut-ups, they got the idea from William Burroughs, who got it from the Dadaists decades before.” Cut-ups! That was off the register in coolness. And the Dadaists sounded like a band worth checking out.

The more I played the album the more the lyrics seemed to burn into the central cortex of my brain.

“I had to pay the doorman

Just to let me use the door

I had to use a muscle man

To pick me off the floor”

sounded to me like the most profound summation of all existential angst.

I was a closet romantic, more shy than I let on, so when Richard Butler’s rich, dark growl announced

“I don’t want you always

And I won’t hold your hand

I won’t give you flowers

I just wanna sleep with you”

it made me feel cynical and knowing in a way that I wasn’t at all.

But what really marked out Butler’s lyrics for me was a brutal honesty about hypocrisy and human failing. ‘Into you like a Train’ opens fittingly enough like a high-speed train and jumps off its chorus with Butler yelling “yeah fall in love!” before warning:

“If you believe that anyone

is outside it all

then you are all so wrong

If you believe that anyone

would try and change it all

then you have been put on”.

At the time, I thought earnestly and often about music’s massive potential as a harbinger of world-turning revolution, or at least deep-rooted social change. So the very idea that supremely gifted musicians were as flawed and self-serving as the rest of us floored me.

Still, I adored the Furs. Not wanting any information that might interfere with the music, I resolved to know as little as possible about them. They were from London. Richard Butler’s brother was the bassist. There was another guy, Vince Ely. That was all I needed to know.

Uncool took me to Bruce’s Records, where I bought my own copy of Talk Talk Talk. Weeks later we discovered the Furs’ first album. It contained new treasures, most of all the elegant ‘Imitation of Christ’ and the rumbling ‘India’ which sent up cultural imperialism and free market exploitation in the line

The Furs were our little secret. And in the manner of mid-teen obsessives, we rather liked it that way. Our favourite band was archly intelligent, seditious and oppositional. We didn’t clock that Steve Lillywhite was a big name producer, or that the band were on mega label CBS. We believed it was just us and a few other enlightened souls who were tuned in to this particular slice of wonder.

So when ‘Love My Way’ began to pick up late night radio airplay I was able to show off my long-held knowledge of the band. I thought the song incredible, marrying Butler’s lyrical and vocal genius; yearning, heartfelt and insightful, it had a mesmerising synth hook that summoned hope and despair in equal measure.

But Forever Now, the album that spawned ‘Love My Way’ marked my first stirrings of disappointment. ‘President Gas’ and the title track both contained trademark Furs brilliance, but after that my attention drifted. Where I would swear by every note of its predecessor, the horrible truth was that Forever Now contained fillers.

Yet the adoration remained. When the band toured, they came to Glasgow the day I left school. I was there, down the front, exultant, yards from Mr. Butler and his cheekbones, belting out every word, feeling the music pulse through my body.

Talk Talk Talk formed a musical backdrop to my first delirious love affairs, marked my bumbling attempts to gain entry into the adult world. Like a time machine, it connects me now with a spirit of boundless self-belief and limitless opportunities that you only really feel sometime in your late teens.

Eventually things cooled. In 1986 director John Hughes used an overproduced version of ‘Pretty in Pink’ for his film of the same name, and suddenly the band were mainstream. Then came Heartbreak Beat, which sold by the truckload in America but sounded to me like the apotheosis of corporate schlock, the end of everything. I stashed the albums in the attic, dropped off the t-shirt at Oxfam.

But time is forgiving. As the children of the eighties moved into positions of power in the media, the decade was critically rehabilitated, unearthing some of the great music hidden beneath the one dimensional official history of shoulder pads, bloated video budgets and big hair. Sometime in the late ’90s, Love Spit Love, the Butler brothers’ post-Furs project, released their towering cover of ‘How Soon Is Now?’ A few of us began to tell curious young scamps that there was a lot more where that came from hidden in the vaults, and it was well worth a listen.

If time is forgiving, so is the advance of age. 30 years is a long time to hold a grudge – long enough to realise that expecting one band to utterly transform everything about the whole world with some bracingly inventive music and a few devastating lyrical flourishes might have been a tall order. The Furs’ star may have waned a little, but at least it once lit up the sky.

So when the band comes to town, I will be there. If the audience is young enough to stand, you’ll find me down the front, belting out every word. Because for all their faults, I suspect this troupe of seasoned campaigners still have the capacity to make my heart leap.

Just as you learn to treasure the first time you truly loved another human being, perhaps it’s worth turning up the volume on the soundtrack to your carefree young self, from the group who stole your heart and mattered in way that only ever happens once. Yeah fall in love!