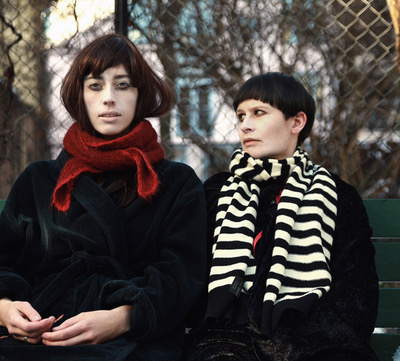 “So that was our warm up,” says Norwegian polymath Jenny Hval following the electronically pulsed opening number for her show as part of Summerhall’s Nothing Ever Happens Here programme. Throughout the song, Dutch dancer/choreographer Orfee Schuijt, cover co-star of Hval’s 2016 female vampire concept album, Blood Bitch, has been putting herself through an aerobics workout. Hval gamely joins in with this when not breathing her spectral and funereally paced vocals into the microphone. To one side at the back of the stage is a big leather sofa, on which she and Schuijt intermittently sit or sprawl when Hval’s not at a flower-strewn keyboard. On the other side, and at a more functional level, a black cloth covered table is loaded with assorted electronic kit from where most of the music emanates, as operated by Harvard Volden.

“We tried to make the stage very cosy,” says Hval, “like an old theatre or play, because we lost all our costumes and an instrument”. She suggests they may be “in suitcase heaven.” Hval’s lack of pink wigs and other glam-tastic accoutrements may leave her exposed in regulation all black outfit and what under the lights looks like silver blue bobbed hair. Such relatively under-dressed demeanour does little, however, to dampen her penchant for spectacle. If anything, it lends what resembles a series of live art routines that accompany each song a friendly intimacy. This opens out what on record can sound introspective to the point of shyness.

Out of this comes a beguiling and contrarily joyous mix of electronic minimalism culled largely from Blood Bitch, the seriousness of which is off-set by some school disco style shape-throwing. As samples of religious benedictions play, Schuijt takes down a sparkly tartan jacket hanging at the back of the stage and puts it on Hval, who has risen from the sofa and sits at the keyboard. Schuijt throws on a white jumpsuit of her own before standing behind Hval and showering her with flower petals.

“That was my Elton John outfit,” deadpans Hval before removing the jacket and going into Drive, a lengthy spoken-word monologue delivered over looped electronic percussion that forms the show’s captivating centre-piece. As Schuijt films Hval on her mobile, the dark minimalism of the singer’s invocations recall New York proto trip-hop poet Leslie Winer.

“I want us all to cry together,” says Hval, after she and Schuijt have acted out real tears. Schuijt waves flowers in the air in one hand, her mobile phone in the other, shaking both with playful relish.

“I’m so tired,” Hval whispers, flopping back onto the sofa, still singing while Schuijt writes on her hand and face with red lipstick from behind. As the electronic pulse increases momentum, Schuijt and Hval jog on the spot, then dance with an un-self-concious abandon that looks part student indie night, part nineties rave. Schuijt holds on to Hval from behind as she sings, tugging at her jumper, so the performance becomes as much about exercise as exorcism. By turns hypnotic, sultry and wilfully absurd, what sounds introspective on record is opened out by such life-meets-art horseplay.

Hval passes a loose-knit bouquet to Schuijt, who throws petals to the audience during Conceptual Romance. With Hval putting the tartan jacket back on and Schuijt donning a black leather one, both sit at the keyboard, seemingly waiting to depart as Volden plays a squelchy disco bass for the final song. “Enjoy yourselves and take care of each other,” says Hval, playtime seemingly over, and they’re gone.