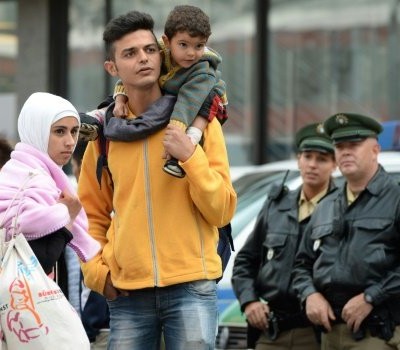 Responses to the refugee crisis have been many, but artist and musician Martin Creed (who won the Turner Prize with an empty room in which the lights went on and off) has produced probably the pithiest statement to date. Consisting of a double A-side free download single with accompanying videos released this weekend, Let Them In and Border Control form a new body of audio-visual work as short and sharp as the miniatures on Creed’s Love To You and Mind Trap albums. Both songs are meticulously structured in keeping with Creed’s patterned canon. The self-explanatory Let Them In offers up a vocal arrangement that gives a superficial nod to the Beatles’ All You Need Is Love by way of REM’s Shiny Happy People, while its’ even briefer flipside is a dry-as-a-bone minimalist word game that resembles protest poems of counter cultures past. Heard together, these two minutes and five seconds of DIY pop sound like fractured nursery rhyme anthems to sing along to, in a way that might just help change the world.