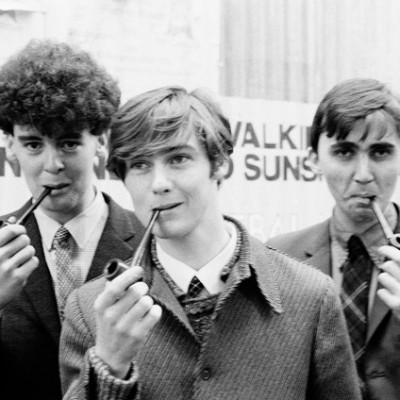 Of all Scotland’s New Towns, East Kilbride arguably provided the most cultural interest. Cumbernauld had the kudos of being the home of Gregory’s Girl, but that was greatness thrust upon it. East Kilbride, at least for a while, offered art and attitude that was all its own.

The Jesus and Mary Chain, who begat their drummer Bobby Gillespie to Primal Scream, Iain Harvie from Del Amitri and Davy Scott of the Pearlfishers are just some of the best that East Kilbride has to offer, but the top of the pops is Roddy Frame, with or without his Aztec Camera. If Orange Juice were Postcard Record’s Velvet Underground then Aztec Camera were their Byrds with Roddy playing Roger McGuinn’s chords and wearing his fringe jacket.

Plenty of songwriters deal with the pain of being in and out of love, but no one captures the feeling that can accompany love like Roddy Frame. From the opening bars of debut single ‘Just Like Gold’ through first chart botherer and radio favourite ‘Oblivious’, to ‘Seven Dials’, the title track from his most recent solo offering, Frame expresses the unfettered joy of being in love better than anyone. Which other Scottish artist would release an album called ‘Love’ and leave it untouched by weary cynicism? I can only put forward Teenage Fanclub as a suggestion.

Of course that’s not all there is; Roddy can break your heart with the best of them. But listen below to ‘Still on Fire’, ‘Spanish Horses’ and ‘Bigger, Brighter Better’, from the underrated ‘North Star’, all of which ache with emotion for place and person, revelling in the unfettered joy of being in love. This is poetry and these clips show that age has not diminished the talent or defeated the romantic. I could say something more about each track, but just listening to them one after the other presents a clear picture of what Roddy Frame does so well:

Frame has had a bit of a popular resurgence in recent times, partly down to a series of concerts at the end of last year where he reminded audiences of his guitar genius and way with words. It is something he is repeating this year, and this return to the stage is a welcome one. He also released the aforementioned ‘Seven Dials’ which was received warmly by critics and fans, and which saw Frame visit his past in a manner which never succumbs to sentimental nostalgia, but is self-searching and poignant, as on the lovely ‘From A Train’.

But it’s only right that I finish with Aztec Camera from the early 1980s doing ‘Down the Dip’, as it brings us neatly back to East Kilbride. One of his earliest songs, written around the age of 16, ‘Down the Dip’, according to at least one story, is about going to The Diplomat, a pub in East Kilbride that was near Roddy’s old school of Duncanrig. There’s also the wee treat of ‘Oblivious’, a song which still gets me every time:

Down the Dip / Oblivious

There is a wide held, if erroneous, belief that in life, winning is everything. Roddy Frame understands better than most that what’s more important is how you play the game. Few, if any, do it better.

*An earlier version of this article appeared at http://dearscotland.com/