In the first of a series of letters to artists who inspired them, author Kirsty Logan salutes singer Kathleen Hanna. 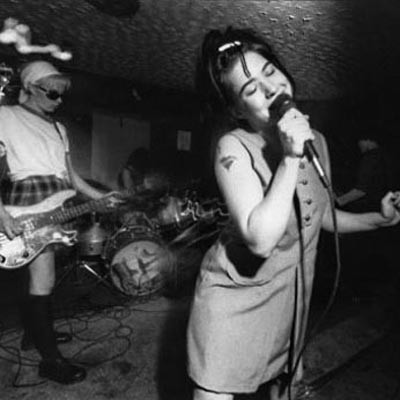 I hope you don’t mind me addressing you like I know you. You’ve been in the background of my life for so long that you feel familiar, like the girl I’ve never spoken to but recognise because we wait at the same bus stop every morning, or both spend hours with a book and a coffee at the same café every Sunday. You were always there, but I didn’t pay you much attention. I was too distracted by other, flashier, more melodramatic heroes. I’m sorry that it took me so long to see you properly.

When I was 15, I bought my very first riot grrrl CD. In those far-off days, half my life ago, in a dozing suburb of Glasgow, there was no riot grrrl section in my local HMV. That meant the CDs had to be bought online, and that meant convincing my dad to let me use his credit card and promising to pay him back out of my pocket money. My first purchase was a double album called ‘Alright This Time Just the Girls’. It had a Mark Ryden-illustrated cover of two adorable, badass, guitar-toting girls, and 48 female rock bands of varying quality and political aspiration. Hole, April March, Detroit Cobras, Lunachicks, Free Kitten. I played that CD to death, then moved on to Bikini Kill, Sleater-Kinney, Cadallaca, Jack Off Jill, My Ruin. It was all female rock, all the time.

But still you weren’t my idol. You weren’t the one I adored. I pinned up pictures of Courtney Love, Drew Barrymore, Katie Jane Garside, Tairrie B: glorious, gobby women who spoke their minds and weren’t fussed about being ‘pretty’ – though I still thought that were gorgeous. I was a teenager, and a melodramatic one at that. I loved that my idols were melodramatic too: having noisy breakdowns onstage, shrieking into interviewers’ microphones, being photographed mugging and pouting in their underwear. They were loud, and they distracted me. But over the years, those idols toppled off their pedestals. There was a void, a need for inspiration – and there you were. You’d always been there, working away, producing music, being amazing. It took me a while to notice you properly, but holy shit I’m glad I did. I’m only sad I missed out on so much.

So many inspirational women fought and died so that I could open my mouth and speak without being shouted into silence.

The woman I am now is down to all the women who came before me, all the battles fought, all the tiny victories lost and won. There are so many inspirational women: my mother and grandmothers; writers and singers and filmmakers; the thousands and thousands of women who fought and died so that I could open my mouth and speak without being shouted into silence. It’s because of them, and it’s because of you.

It’s down to you, and other women like you, that when the angry man in my writing group said that writing about women and girls makes my stories silly and fluffy and pointless, I realised that it’s not my problem – it’s his. You taught me that women are strong. You taught me that it was okay to be angry. Being angry doesn’t make me less of a woman. Nothing I can do makes me less of a woman, because I am a woman, and I am proud.

I don’t need idols the way I did when I was a teenager, and I’m long past pinning photos to my bedroom wall. But that fits you just fine, because you’re not just an inspiration for teenage girls. You’re an inspiration for women, and for everyone. So yes, I missed out back then. But I’m glad that I know more about you now. I hope that having you as my grown-up, proper-woman inspiration will lead me on to bigger and better (and less melodramatic) things. Now excuse me while I turn ‘Deceptacon’ up loud and dance around my front room…

Kirsty Logan is the author of The Rental Heart & Other Fairytales.