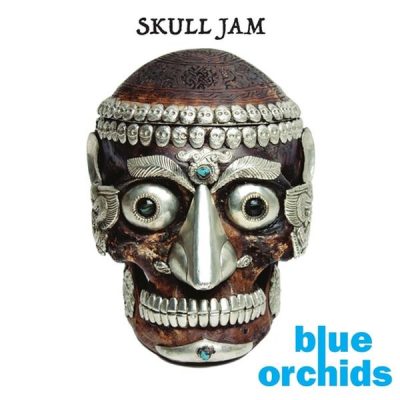 When Martin Bramah left The Fall in 1979 to form Blue Orchids after co-writing his former band’s first album, Live at the Witch Trials, it set in motion a musical lineage that’s run parallel with fellow Fall co-founder Mark E Smith’s bloody-minded forty-year assault on culture. History will decide whether the latter is either a masterpiece of social engineering or the extended public self-destruction of a terminal drunk. While ex Fall guitarist Marc Riley and now Brix Smith-Start have come to renewed prominence playing records on the radio, the off-shoot acts spawned by Smith’s army have received less attention than they deserve. Now Smith-Start has attempted to reclaim her past with early eighties Fall rhythm section Steve and Paul Hanley and push it towards a future with less baggage as Brix and The Extricated, all that might be about to change.

This is good news for Bramah, whose current incarnation of Blue Orchids is having something of a renaissance, as this new four-track EP confirms. Partly recorded at the same time as 2016’s The Once and Future Thing album and released on 10” vinyl, there’s a relentless and unreconstructed sense of urgency and purpose to the record.

As with Bramah’s first band, Blue Orchids tripped out of a messier side of Manchester than the sleeker image served up by Factory Records empire-building myth-making down the road, and there was something ever so slightly hippified about them. This was never mellow or laid-back in its appropriation of the sixties, but sounded  more uptight somehow.  Blue Orchids still reeked of free festivals, but any indulgences were tempered by a gruffer, more direct form of sooth-saying born from a counter-culture of inner-city squats rather than getting-your-head-together-in-the-country hedonism.

So it goes here with the EP’s title track, which thunders in sounding like Volunteers era Jefferson Airplane if they’d hung out in a Greater Manchester recreation ground rather than Woodstock and Monterey. Skull Jam proceeds to kick out the, er, jams, with a fierce call to arms that evangelises a pounding form of psychic revolution before finding a potato chip that looks like the baby Jesus. Hanging Man follows up with an intense seven minute epic driven by chunky bass and wiggy organ that soundtracks an archaic purging that batters its demons into submission.

The two tracks recorded after the Once and Future Thing sessions see former A Witness bass player Vince Hunt taking over from Chris Hutton to join drummer Chris Connolly and keyboardist John Paul Moran.  The first is a telling cover of Atomic Rooster’s unlikely 1971 hit, The Devil’s Answer, a school disco head-banger that copped its riff from The Who, and is here fleshed out by extra crunchy guitar and 96 Tears organ. Bramah sings over all this like his life depended on it.

Finally, trainspotters can delight in Work Before The Moon Falls, a mash-up of sorts that sees Bramah rummaging through his back-pages to splice together second Blue Orchids single, Work, and Before the Moon Falls. The latter was co-written with Mark E Smith before the split, and appeared in a different form on the Fall’s second, post Bramah album, Dragnet, while Bramah channelled his original tune into Work.

Combined, this makes for something less psychedelically inclined than the former, and less spindly than the latter. In their place is bounce and drive aplenty, and the recognisable gear shift into more menacing waters towards the end as a crazed Bramah urges us to ‘use the power’. Which power isn’t clear, but what sounds like a Manchester chain gang looks set to unleash its darkest forces. It’s quite a trip.