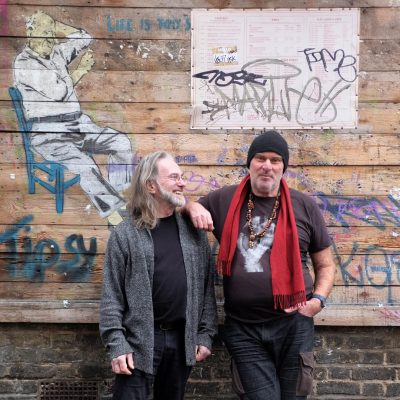 It may be twenty years since kosmiche deconstructionists Faust almost caused a minor panic by letting off fireworks and flares in an Edinburgh nightclub as part of their performance, but sparks still fly when they come together. This is evident from the new Fresh Air album by what, after forty-six somewhat nomadic years since they formed in Wumme near Hamburg, is now the band’s core duo of bass player, vocalist and self-styled ‘art-errorist’ Jean-Herve Peron and drummer Werner ‘Zappi’ Diermaier. It’s true too in the pair’s first Edinburgh show for the best part of a decade (they brought a cement mixer that time) as part of Summerhall’s ever-adventurous Nothing Ever Happens Here programme. Mid-way through the set, Peron stoops low, so his long grey hair is all you see of him before the crunch of the angle-grinder he wields causes cascades of fire to flume into the air. The sparks are dangerously close to both the audience standing less than a foot away, and the woman sat on the lip of the stage, calmly knitting as controlled chaos reigns about her. As the grinder’s industrial whirr is heard above Diermaier’s martial pounding and the washing machine guitar and keyboards of a third band-mate, it becomes the centre of a monumental rhythm section that also creates its own spectacle.

The quartet, knitter included, began the night with the extended drone of Rund Ist Schoen, in which bowed guitar and bass built a relentless path anchored by the wilfully rudimentary repetitions of Diermaier’s drum patterns. After a brief pause in which a beatific and twinkly-eyed Peron thanks pretty much everybody, it seems the sheet of metal hanging next to Diermaier’s kit isn’t miked up loud enough. It eventually clangs into life with a vigour that puts paid to any misconceptions that, just because Peron – at least – is prone to making light banter inbetween songs, Faust are in any way whimsical.

The band are joined onstage by seemingly unlikely support act, James Yorkston, the Fife-based singer-song-writer who had earlier played a solo set of songs peppered with downbeat warmth. With Faust, as Peron jabbers in French over a distorted guitar melody, Yorkston growls into the microphone, before reading from a sheet of paper in front of him.

Fresh Air’s title track is a furious call to arms for something purer than the world can currently offer. As a gruff-voiced Peron declaims the names of nations with the fervour of a street-corner preacher, getting back to nature becomes not so much a global village idyll as a necessary and more practical way of being. This is illustrated on the screen behind by footage of potatoes being peeled and hung-out sheets blowing in the wind. Such images of everyday zen may seem at odds with the righteous ferocity of Peron’s outburst, but they also help illustrate the two sides of Faust.

On the one, there are the short stabs of metal-punk guitar riffage given a primal, bass and drum-led edge. On the other, low-attention span sonic cut-ups, which fuse onstage instrumental experiments with found sounds. While this is where the angle-grinder and the knitter come in, these are never scattershot. A collage of a recorded monologue that sounds like it could be a broadcast of Samuel Beckett or James Joyce is off-set by noises off that are calculated enough to occupy an experimental radio slot.

All this is delivered by Peron and a passive but crucial Diermaier with a collective charm that debunks the image of po-faced experimentalism with good-humoured warmth. Yorkston returns to play a twin guitar acoustic waltz with Peron, love and anarchy are on Peron’s mind, and self-mocking monster-sized wig-out Krautrock gives way to images of the sea and a plea for humanity as the conjured sounds seem to shimmer with life.

“Listen to the fish,” is Peron’s final advice, before donning a pink-hued bobble hat knocked up by the knitting lady over the previous ninety minutes. As closing gambits go, after the mind-expanding cacophony that went before, its hippy wisdom worth listening to.