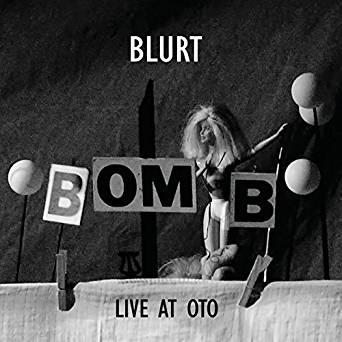 In 2015, Ted Milton’s skronk-punk power trio Blurt released their Beneath Discordant Skies album on Salamander Records. After almost forty years on the margins, Milton had grown nostalgic for the days of recording in the cramped four-track studio run by his brother and former Blurt drummer Jake not long after the band had been formed in Stroud, Gloucestershire. This followed Milton’s peripatetic career as a book-binder, a poet whose work appeared in the definitive 1960s UK underground anthology, Children of Albion, and an avant-garde puppeteer who had been seen both in Terry Gilliam’s film, Jabberwocky, and on Tony Wilson’s pioneering arts magazine show, So it Goes. Some of Blurt’s early material appeared on Wilson’s Factory record label, since when Milton and various line-ups of his trio have released a plethora of wilfully off-kilter material, with no recognisable indulgences in multi-track overdubs apparent. For their sixteenth album, Milton and co decamped to the three metres square Moriaki Skyway studio in London’s East End for a rehearsal free recording in which guitarist Steve Eagles and drummer David Aylward provided off-the-cuff musical arrangements to accompany Milton’s skewed poetics.

The band honed the songs on the live circuit over the next six months, and by the time they played their show at Dalston’s definitive underground venue in January 2016, as captured on this vinyl-only edition, the set was at a peak of machine-gun ferocity. Not that any edges have been rubbed off. If on Beneath Discordant Skies the songs were straining against the claustrophobic space the band were contained within, here they’ve burst into the open, gurning, shrieking and squawking, but sounding more urgent than ever.

Blurt frequently sound as if Milton is pushing against some invisible forcefield that will allow him to not just connect with the audience, but prompt them into some kind of collective action. It’s like when Blurt played Optimo a decade or so ago, and Glasgow’s late-night Sunday art-rock crowd flung themselves about the room with an abandon that tapped into the band’s appositely bass-free groove. More recently, the same year Beneath Discordant Skies was recorded, Milton was co-opted to record authentic free jazz sax for the soundtrack of the Edinburgh International Festival staging of Alasdair Gray’s fantastical novel, Lanark.

While these incidents demonstrate how much Milton straddles generations as well as artforms, the odds that something similar to what happened at Optimo occurred at Oto are slim, however much the opening stabbing guitar pattern and metronomic drums of Let Them Be invites it before Milton declaims like some fire and brimstone anti-capitalist preacher at Hyde Park Corner. Milton’s voice rises and falls as he lets rip his fractured poetry until words are no longer enough and his saxophone takes over. The guitars are funkier on Giant Lizards on High, a B movie monster flick soundtrack in waiting that channels the vocal theatrics of Adi Newton of Clock DVA, the polemic of Mark Stewart and The Pop Group and – especially – John Lydon on Metal Box-era Public Image Limited.

I Wan See Ella is a jittery, skittery St Vitus Dance of a song, with Milton’s quasi-pidgen English utterings reducing language  to a bare minimum. It’s this clipped brevity that counts in the music as well. This is no freeform freak-out, but a calculated exercise in tautly-strung minimalist expressionism that operates in meticulously precise parameters.

Where’s the Blue Gone? begins with a borderline Afro-Beat, fusing continents and cultures as it taps into a primitivist European sense of the absurd. Eagles’ guitar  threatens to let rip on Stella By Arc Light with a proggier edge, but instead prowls around the edges, lending texture to Milton’s monologue.

Side Two opens with the reggae skank of Fresh Meat For Martyrs, a dark narrative peppered with deranged laughter. Oh Look Who’s Out on Parole! features distorted sax and guitar circling the neighbourhood with menaces as Milton gawks with disturbed wonder like a spectator at a 1940s London crime scene. Listen to Me, Shirley! sounds possessed by Captain Beefheart before the album’s title track takes control, with Aylward’s glam-tastically bouncy drums poundingly at odds with Milton’s honking discourse.

To close, They’ll be Here Soon! opens with middle eastern shimmy and a military drumbeat before Milton embarks on a mournful tale part Samuel Beckett, part dystopian disaster. Milton’s  portents of doom veer into a howl before finishing with handclaps and a show-stopping piece of audience participation.

As the five minutes of artfully-shot black and white footage of the show that appears on YouTube makes clear , Live at Oto is crying out for an accompanying DVD release. Blurt aren’t just a band. They’re an oppositionist abstract-expressionist performance art troupe, and the visual physicality of Milton is as important as the music. The spoken-word section and the apocalyptic Barbie doll puppet show prologue featured on the album cover are essential components of the Milton/Blurt experience, and everyone should bear witness to their power and fury in any way they can.