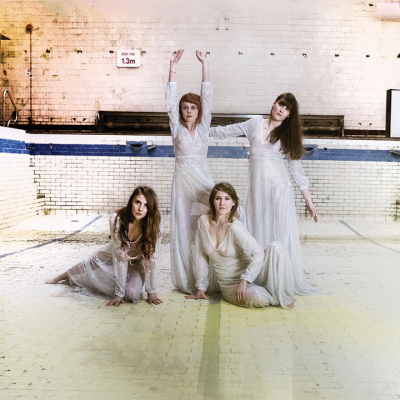 Teen Canteen first swaggered into view a few years back like a Glasgow girl gang weaned on C86 indie-pop and 1960s’ bubblegum. The sound the all-female quartet aspired to was a consciously constructed sugar-rush led by lead vocalist, synth-ist and chief song-writer Carla Easton. As their canon matured, while heart-on-sleeve harmonies remained key, a meatier, beatier post-indie fabulism emerged that was writ large across their 2016 debut album, Say it All With A Kiss. A restless Easton went on to all but upstage herself with the soul-glam euphoria of side-project Ette on the Homemade Lemonade album. Barely pausing for breath, she’s back in the Teen Canteen fold with guitarist Chloe Philip, bass player Sita Pieraccini and drummer Debs Smith for this shiny new four-track EP.  Released on 10 inch transparent blue and red vinyl with white splatter, studio sparkle seems to have been sprinkled liberally across all four songs.

Any pre-conceptions of tweeness are blown away from the start, as the great big two-fingered clarion call for independent women that is the opening What You Gonna Do About Me? stomps in. With Easton and co taking to task the overly-controlling klutz the song appears to be aimed at, things take a musical turn for the wide-screen as Easton’s voice expands into something strident, defiant and frankly huuuuuuuge in its execution.

Mercifully, she sounds like she’s somewhat wisely dumped the big galoot by the time she begins Can’t Go Back (Starry Eyed) over a stabbing synthesised bass-line. There’s still an element of lament at play as the song builds to become an ever-expanding epic, with proper pop star harmonies that sound like a supportive sorority backing her up every step of the way.

Millions may be crying real tears by the end of the song, but its low-end piano and drum-beat intro thwacks its way into your heart like a slap round the face. In-between, a barely repressed yearning gathers apace with monster-sized proportions.

Finally, the EP’s title track may point to accompanying publicity shots of the band posing in white in the derelict pool of what used to be Govanhill Baths in Glasgow, but inner-city ambulance wails are being referenced here. A pared-down reworking of a track from Say It All With A Kiss, Sirens (Piano Mix) offers up a breathier and more wistful reflection of more innocent times past.

Despite what Easton might suggest in her lyrics to Sirens, in terms of confidence, Teen Canteen here sound super-powered. All four love-lorn pop melodramas  are kitchen-sink constructions both in their wall-of-sound production as much as their redemptive coffee-bar purgings.

In an ideal world where the pop charts still mattered, each of these girl-powered anthems would be in there like a silver bullet. As if by magic, that bullet would burst open and shower all about them with glitter-tipped hearts that were once in pieces, but have now healed to become as beautiful and fearless as every soaring moment captured here.