A moving documentary turns the camera on itself to examine the relationship between corporate media and the human tragedy on which it feeds. By Tamara Abdi 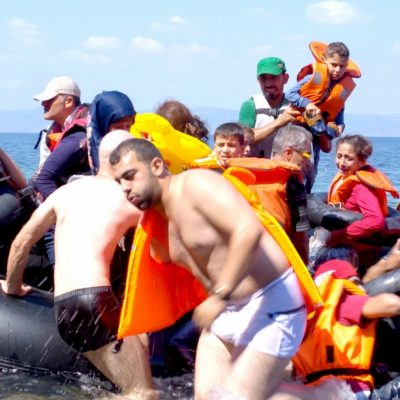 The opening images of Another News Story are ones with which we’re all familiar. Exhausted men, women and children cling frantically to the fence of a refugee camp as its’ gate closes, locking them out. In the darkness, light shines on a news correspondent relaying events to the camera. He’s talking to us. We, the viewers: at home on the sofa, on our phones in our lunch break, on the way home from work. He finishes. The lights are turned off, the equipment packed away. Around him, refugees are sleeping in tents and makeshift beds as the camp has reached full capacity. A low snore can be heard and a child begins to cry. You now feel you’re intruding. In the light of day, Roszke refugee camp on the Serbian-Hungarian border, can be seen clearly. There are so many tripods, cameras and bits of equipment that the camp looks like a movie set. In many ways it is – images are being carefully chosen, produced and packaged. You’ve seen the final product a hundred times, on a hundred different screens, but not like this.

At one point in the film, a member of a production team remarks to another “if you want to speak to a pregnant woman, she’s over there”. It’s jarring to hear human beings talked about as if they’re merely tokens, something to be ticked off on a checklist.

The film explores the need within global media to capture and share ‘human stories’ – that is, a feature story about individuals or groups told from an emotional perspective. This creates a culture where journalists are constantly searching for emotionally triggering stories and images. Hooked on these, we become complicit, turning a blind eye to the disregard with which they are sourced.

At another point, people stumble off a raft onto the beach of a Greek island, disoriented, eyes wide and searching, their dripping hair plastered to their faces. Before they are offered water or food a camera is shoved in their face and a voice demands their ‘story’. Now, in a time when refugees and immigrants are regularly dehumanised it’s vital to share stories that act as reminders that these people are human (as depressing as it is that this could be forgotten). However, they must be treated sensitively and with respect, not taken from people in their most desperate moments, only to be gawked at by total strangers who will inevitably become desensitized. Complex human beings are reduced to bite sized human stories, which are far easier to sell and to consume. As one producer says, ‘like famine in Africa’ people will grow tired of seeing it and the cameras will move on to the next story. The concept of ‘famine in Africa’ is a reductive stereotype designed to shock and offered without explanation. When people don’t understand why the problem isn’t being solved they get bored of seeing it over and over again. Is the “refugee crisis” destined to suffer the same fate?

Through the course of the film we travel across Europe, through Greece, Macedonia, Serbia, Hungary, Austria and eventually Germany. We hear people’s stories along the way as they make the same journey by boat, by train, by bus, and by foot, in all weathers. These stories of real lives are handled with care.

It’s crucial to listen to the language and examine the images shaping this narrative. You will have heard people described as a ‘swarm’ or ‘flood’. You will have seen the corresponding photos of nameless, threatening, faceless crowds, seemingly right on your doorstep. These so called ‘migrants’ are conjured up as a plague on Europe. The fact is that the deliberate use of this language and these images has very real and very dangerous consequences. As the tropes of the undeserving ‘migrant’ and conversely the deserving ‘refugee’ are alternatively trotted out, a climate of suspicion and fear is created. Who’s ‘real’ and who isn’t? Their trauma is dismissed as crocodile tears or trojan horses and we find ourselves in a paranoid echo chamber where the headlines reflect the politicians and vice versa.

The truth is that we are not used to having to think about issues such as the refugee crisis in any real depth. It’s far easier to resort to sensationalised headlines and images, to panic or ignore it, than to have a complex, honest discussion about how these issues were created or how to respond. As any item in our fast production, fast consumption society, we’re happy to accept the final product without fully understanding how it was made. What’s the human cost of fast media? Another News Story attempts to answer this question by taking you to the other side of the screen and forcing you to re-evaluate your relationship with global media. You’re watching something you’ve watched a hundred times before from an uncomfortable new perspective. It’s not pretty.