Patrick Small is charmed by “The Possibilities are Endless”, a new documentary about Edwyn Collins 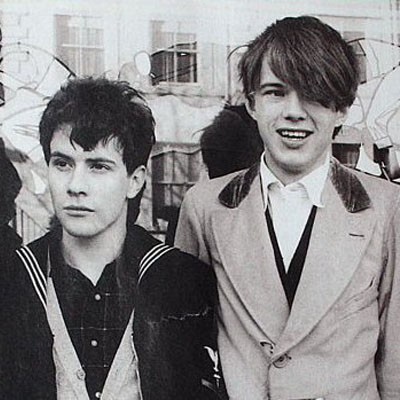 To music fans of a certain vintage, Edwyn Collins is adored for his exuberantly intelligent writing, arch humour and knack for knocking out great tunes. He embodied “the sound of young Scotland” in the far-off days of Glasgow’s pioneering label Postcard. His band Orange Juice projected hope, romance, and a shimmying carefree confidence. They looked as if they might fall over laughing at any moment – just as the title of their first record suggested.

The band’s sparkling charm seems only to shine brighter with the passage of time. “I remember thinking “why wasn’t I told about this?”” complained Franz Ferdinand’s Alex Kapranos on discovering a stash of Orange Juice singles in a Glasgow market.

Collins longevity and output meant that he became many Edwyns. There was Edwyn as Indie Pop Near-Deity, a kind of alternative national treasure; Edwyn the Musician, building a recording studio in London with the proceeds of the global smash “Girl Like You” and Edwyn the Man, getting married and becoming a Dad.

People with a stake in any or all of these Edwyns listened grim-faced when it emerged that Collins had suffered a massive brain hemorrhage and slipped into a coma. When he finally awoke, doctors feared that the part of his brain that controlled language and speech was damaged. Edwyn Collins, who had created peerless poetic couplets about human frailty in the context of magnificent pop songs, might never speak again.

“The Possibilities are Endless” intricately charts Collins’ long, slow recovery, his efforts to regain his speech and artistry, and reconnect with the people and places he loved.

It would have been easy to make a perfectly watchable BBC 4-style documentary about Collins, with industry admirers popping up to eulogise him. But “The Possibilities…” is riskier and more rewarding.

Grace Maxwell, Collins’ wife and manager, found him slumped on the floor of their London house one Sunday in 2005. The early section of the film intersperses Edwyn’s halting speech with Grace’s description of how close he came to death. The contrast works well. Grace talks at a regular pace, describing what all of us dread: being rendered powerless as our loved ones leave us. “I was standing beside him, frozen to the spot. He’s deep in a coma and it was clear that his life was ebbing away…”

Edwyn stumbles for words to describe emerging from the coma. His voice echoes strangely, as if uttered in a dank cavern. “I’m striving” he manages. “…striving to think….” On screen a man struggles in deep water, grasping for the surface.

The soundtrack, by Collins, is elegiac and plaintive. Helmsdale, the Sutherland fishing village where he spent summer holidays as a child, becomes a dominant character in the film. Images of kids playing in a park, trees bent by wind and the yellow/green of lichen on rocks fill the screen. The couple describe Collins’ struggle to communicate once more. “Nothing meant more to him than that place” says Grace.

This may or may not be true, because when Collins began to speak, he could manage only: “Grace Maxwell” and “The possibilities are endless”, which seems a very Edwyn sort of thing to say.

Over footage of early Orange Juice, unknowingly glamorous and handsome, the pair describe how they got together sometime in the eighties. Their courtship is re-imagined, wordlessly, with their son William playing the role of his Dad and actress Yasmin Paige channeling young Grace.

The love story between Grace and Edwyn -“she set me free” he says – lies at the film’s heart. It tries and largely succeeds in saying something hopeful about love, mortality, the redemptive power of nature and the stark beauty in everyday life. Edwyn learns to draw and speak again. He returns to recording and sings live once more. Grace and Edwyn leave London and set up home in Helmsdale, where we leave them on the cold, windy beach. In his black duffle coat Edwyn hirples purposefully across the sand, as if setting off on a new adventure. He stops abruptly, leans on his walking stick and turns towards Grace, smiling.